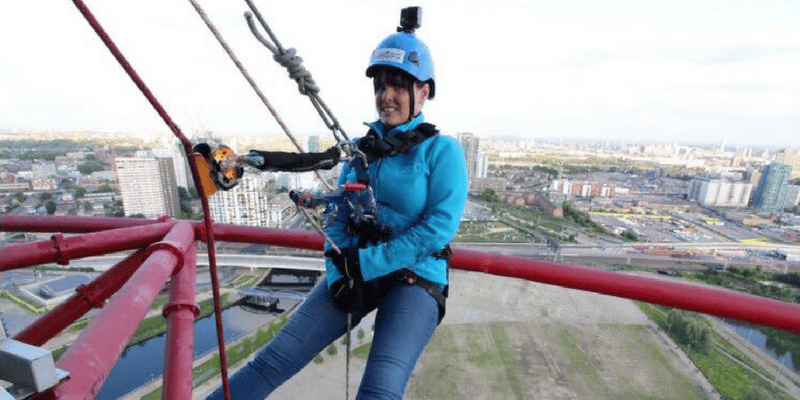 A total of 23 brave St Clare supporters have gone for gold at the Queen Elizabeth Olympic Park in Stratford, London, by completing the UK’s highest freefall abseil in aid of St Clare Hospice. The fundraising adrenaline-junkies have helped to raise almost £7,500 for St Clare!

The group of adventurous abseilers took part in the sponsored charity event at the ArcelorMittal Orbit tower in the Queen Elizabeth Olympic Park, Stratford, throughout June and July. The challengers conquered their fear of heights by taking part in the 262 foot abseil, climbing down the UK’s tallest sculpture – the equivalent of a 34-story building!

Amongst the 23 participants were two members of St Clare Hospice staff, each from a different department. Taking part was Samantha Hegarty (Chef), from Harlow, and Alison Boggas (Inpatient Unit Nursing Assistant) from Sawbridgeworth.

Samantha Hegarty, who has worked as a Chef here since 2014, took on the Orbit abseil on 16 June 2017 with her sister Debbie Hegarty. The pair have raised a combined total of more than £1,500 – smashing their target of £400.

“Abseiling the Orbit was one of the scariest yet most incredible experiences of my life! I don’t have a fear of heights, but I do have a fear of falling, so completing the highest freefall abseil in the UK was quite an achievement for me! My sister and I abseiled together and we were laughing all the way down! The view of London from the top was incredible as well – I really recommend abseiling the Orbit to anyone who likes a challenge and who has a good head for heights – or wants to overcome their fear of heights!”

If you would like to register your interest in taking part in future St Clare Orbit abseil challenges, call our Challenges and Events Fundraiser Emma Broadbent, on 01279 773754, or email her at [email protected]