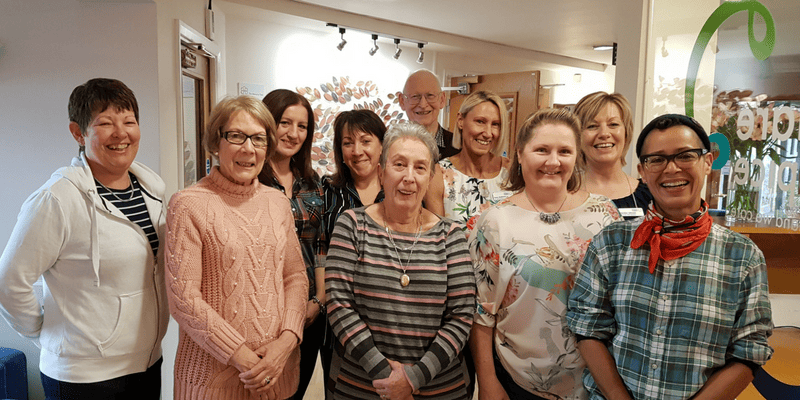 Congratulations to our first cohort of trained Compassionate Neighbours volunteers!

St Clare Hospice has recruited and trained our first cohort of supporters to join our new community-led project aimed at tackling loneliness and isolation across West Essex and East Herts.

A total of 11 people completed the two-day training course on 20th and 23rd March and graduated as trained Compassionate Neighbours.

Compassionate Neighbours is an award winning, community-led project for people living with a life-limiting illness, or who are experiencing frailty, loneliness or social isolation. The project was founded by St Joseph’s Hospice in East London in 2011 and received national recognition when it won the Charity Times Community Award in 2017. Compassionate Neighbours projects have now been established in a total of eight hospices.

“The response from the public to the launch of our new community-led project has been phenomenal. People are aware that loneliness and isolation amongst older people is an issue in their community, and so they feel motivated to be part of a social movement that is addressing this very real issue. There is also clearly a huge desire amongst people to be there for each other, and to offer their support to their neighbours, and this project is just about unlocking that desire and enabling people. We are delighted to have trained our first cohort of Compassionate Neighbours and are now undergoing the matching process – whereby we find appropriate community members for them to visit.”

“The matching is really where the magic happens! My role is to get to know both the isolated community members, and the trained Compassionate Neighbours, so that we match them based on their shared likes, interests and experiences. The important thing is that the relationship is equal – it is not about a person having care or a service ‘done to them’ – but about two people connecting and sharing time together in a way which has a positive impact on both of their well-beings.”

One of the newly recruited St Clare Compassionate Neighbours is Diane Bailey (from Harlow) who said:

“I really enjoyed the training that we did and am excited to have become one of St Clare’s very first Compassionate Neighbours. When I heard about the project I just thought it sounded like a fantastic initiative and one which I would be proud to get involved with. I know that there are lonely people in my community who would enjoy just having a cup of tea and a chat. I wouldn’t know how to find these people, or how to offer my companionship to them, so to have a project like Compassionate Neighbours is great. It is helping me to fulfil something which I have wanted to do, but just didn’t know how. I am still working full-time, but I am committed to making the time to pay someone a visit every week for an hour. We all lead busy lives, but if you want to do something, you can always make the time. Taking part in the Compassionate Neighbours project is a really worthwhile way to spend my time, and I know I will be making a difference to someone who is lonely.”

St Clare Hospice aims to recruit a total of 50 Compassionate Neighbours in the first year of the project. They will be running a second round of volunteer training in April 2018.