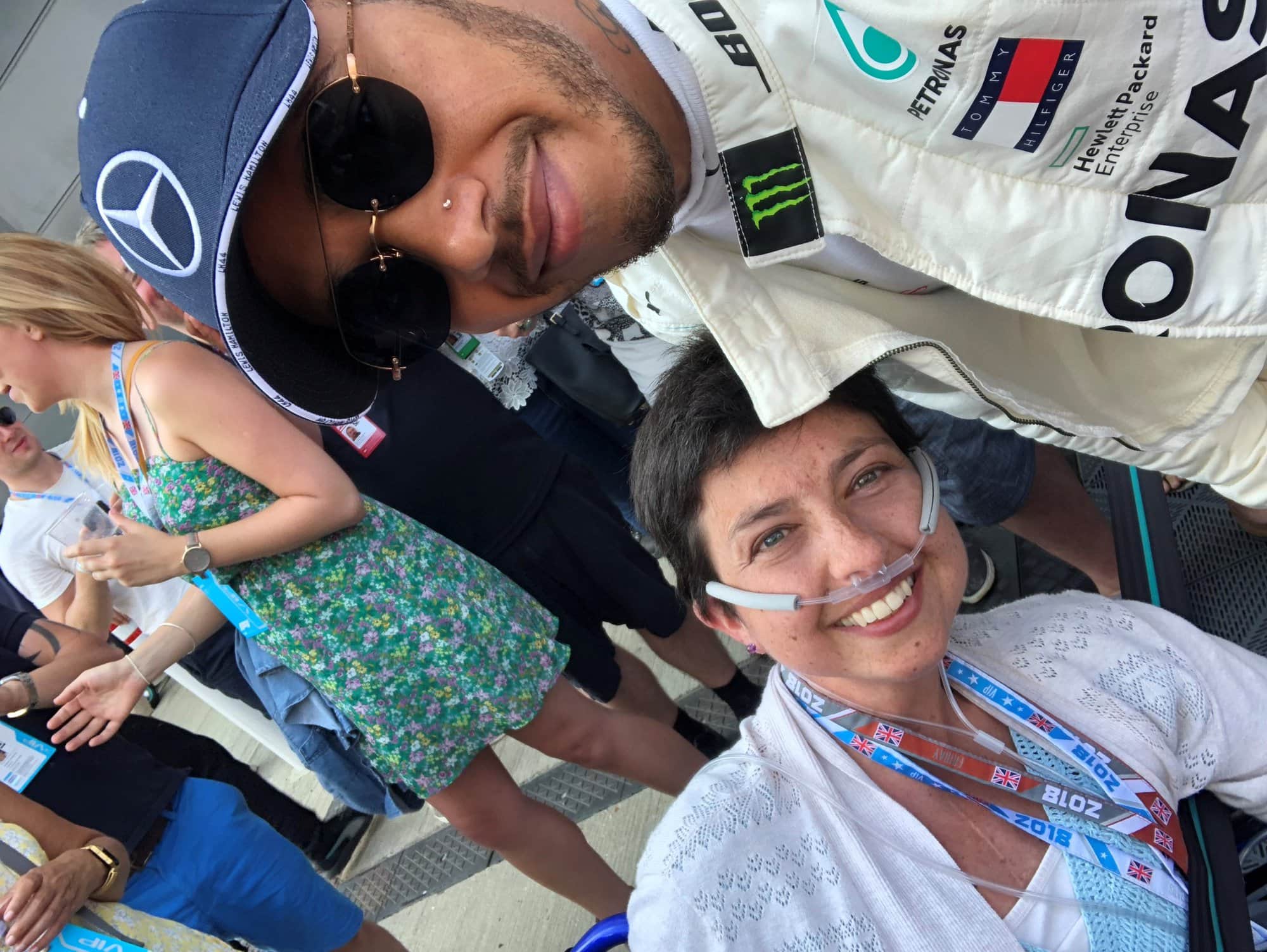 Katherine Lee (aged 39 years from Epping) is a self-confessed Formula 1 fanatic and has followed the sport since she was a teenager. Katherine’s mother, Diane Lee, approached the hospice who cares for her daughter and asked if we could assist in arranging a special 40th birthday surprise for Katherine.

Katherine has been supported by St Clare Hospice, based in Hastingwood, since December 2016 when she was diagnosed with terminal heart failure. Katherine’s condition began after treatment for childhood cancer, aged 12, which saw her undergoing radiotherapy that caused later complications and heart failure. The Hospice has been supporting Katherine and her family with specialist medical advice from their Clinical Nurse Specialists, practical support from their social workers, and outpatient support from their Day Therapy team including their occupational therapists, physiotherapists and complementary therapists – all who have helped Katherine to manage her condition and continue to live her life to the full.

It was Katherine’s social worker at the Hospice, Michele Tavarone, who first took on the challenge of planning Katherine’s special day. The Hospice arranged for Katherine and her mother to attend the F1 British Grand Prix at Silverstone on Sunday 8th July after securing a grant to pay for the tickets from the Willow Foundation – a local charity that pays for seriously ill young adults to have a special day out. Having secured the Sunday tickets, the Hospice’s Communications team undertook a social media campaign to attempt to reach Lewis Hamilton.

The ‘Katherine’s F1 wish’ campaign reached over 50,000 people on the Hospice’s Twitter page in mid-June and led to a member of the public giving Katherine an additional two VIP tickets to Silverstone for Friday 6th July when her and her mother had a tour of the pit-lanes and garages, a ride around the track on an open top truck, and watched the warm up races, as well as a chance meeting with Lewis Hamilton when the F1 champion snapped a selfie with Katherine.

Katherine’s dream was not set to end there though. A representative from fashion brand Tommy Hilfiger, of which Lewis Hamilton is an official Ambassador, saw the Twitter campaign and got in touch with her with an invitation to an exclusive launch event to be held at their Regent Street store on the evening of Tuesday 10th July. The event was for the launch of Lewis Hamilton’s official clothing collection – Tommy x Lewis – which will be available to purchase this Autumn.

Just before leaving for the launch event, Katherine received a phone call from Lewis Hamilton’s team inviting her to meet Lewis at his hotel suite before the Tommy Hilfiger launch event.

Katherine said: “I couldn’t believe it when we got another phone call inviting us to meet Lewis before the launch event, in his hotel suite. It was apparently all Lewis’s idea! My Mum, my friend Beth, and I, were welcomed at the hotel foyer by a member of Lewis’s staff and we were invited to wait in the bar as Lewis was still busy meeting journalists. Once he was available, we were taken up to his suite and invited into a big lounge. Lewis then came in, wearing his special Tommy Hilfiger outfit ready for the launch event, and just sat with us and chatted. It was so surreal!”

Katherine continued: “Lewis was just so nice and down to earth, and he talked to me for over 20 minutes. We spoke about Formula 1 of course, as I have been a fan of his for years and have followed his whole career. We talked a lot about Sunday’s race, as it had been such a spectacle to watch, and it really just felt like talking to a friend. He was just so modest and kind. We then took some photos in his hotel, and you can see the huge smile on my face! I just couldn’t stop smiling like the Cheshire cat all weekend. I told Lewis about St Clare, and how they had helped arrange my trip to the Grand Prix, and he was happy for me to share my story with the Hospice and of course the photos which we took together. I just feel like I am on Cloud 9 and cannot really believe that it all happened!”

Katherine said: “Once we had finished talking it was time to leave for the Tommy Hilfiger launch at the shop in Regent Street. We were escorted by one of Lewis’s bodyguards to the event and then given front row seats to watch the launch! We then stayed for the party afterwards, where there were canapés and the champagne was flowing. It was just crazy for me to be at an event like that, with fashion icons and celebrities. I had to pinch myself to believe it was true! They were certainly a few days that I will never forget, and I am so grateful to everyone who made it happen. The staff at St Clare’s, the people who kindly shared the campaign on social media, the PR team at Tommy Hilfiger who invited me, and of course Lewis Hamilton and his amazing team of people! It really was a dream come true for me.”