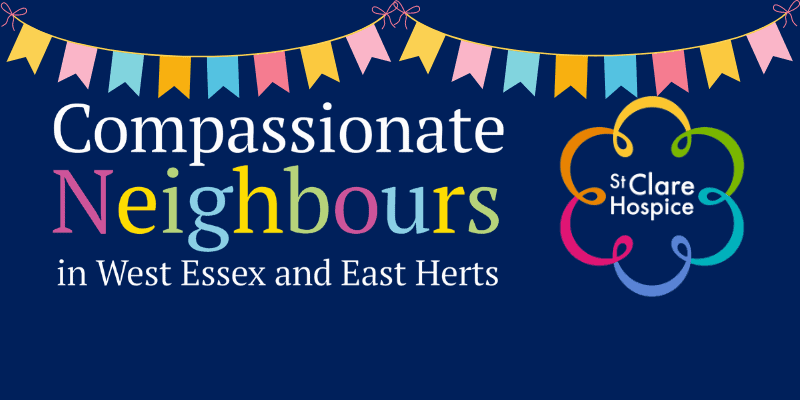 Since the project started at St Clare Hospice, in 2018, it has connected more than 300 people, with 166 volunteers who have trained to become Compassionate Neighbours – giving an hour a week to offer social and emotional support to others who are isolated. More than 150 Community Members (socially isolated individuals in the local community) have been matched in this time, bringing friendship into their lives with a weekly call or visit.

The Compassionate Neighbours project has become a vital scheme during the pandemic, when instances of isolation and loneliness have increased with lockdown and the restrictions, especially in relation to those who are clinically vulnerable.

“When I look back to the beginning of the project, in March 2018, I never thought that the initial group of volunteers would make so much difference,” reflects Stacey Towler, Compassionate Neighbours Project Manager. “I always knew this project was important, but I didn’t realise how vital it would grow to be in just three years, but it fills me with great pride to have played a part in bringing friendship into the lives of people who are nearing the end of their lives and are lonely.

“I’m so glad that our project was already established and was able to easily adapt to support more people during the pandemic, as rates of isolation and loneliness increased – especially amongst older people, and those who are already frail and vulnerable from their conditions.

Stacey adds: “The beauty of this project is that it brings mutual benefits to everyone involved; it’s been such a delight matching people and seeing their friendships flourish over the last three years.”

The Compassionate Neighbours are ‘matched’ with their Community Members based on common interests, lifestyles and experiences and both parties benefit from a mutual, supportive relationship as friends.

Margaret Porter was one of the first volunteers to join St Clare Hospice’s Compassionate Neighbours project. She joined the project as a volunteer in April 2018 and received training from Stacey on how to build friendships with community members. “It was interesting and highlighted things I might not have considered,” comments Margaret. “Things like remembering not to impose yourself and letting them work out what they want from the friendship; you have to go along with what they need from the friendship, rather than what you might like to help with.”

Following on from her training, Margaret was matched with Jane*.  Margaret and Jane are one of the longest running matched pairings from St Clare Hospice’s project; they bonded over their love of dogs and their friendship has flourished ever since. Jane is a lover of all animals but was particularly missing her dog when Margaret first started visiting.

Jane lived with her sister and had been her carer but then her sister’s health deteriorated and needed greater care and support so moved into a nursing home.

This created a vacuum for Jane, who was used to a busy life of caring and managing home life. Shortly after this her beloved dog, Griff, died.

Margaret would visit once a week, and regularly brought along her dog, Eddie, who was only a year old when Margaret began visiting Jane.

Jane reflects on the support she’s received through her friendship with Margaret, “We sort of seem to get on all right together; I enjoy the companionship it’s just nice having somebody to talk to. When everything was alright then she used to come here and we used to go for walks, we even went to the local garden centre. Her dog, Eddie, used to come in here too and I used to spoil him – he is such a gently boy. It’s just reassuring knowing her and the dog are there – if I needed someone. I know Margaret is there for me – it’s just nice to have a friend.”

Margaret considers her friendship with Jane, “I’ve been blessed with having Jane as my Community Member; she’s a very easy person to get along with.”

A core feature of the Compassionate Neighbours is the mutual benefit for the Compassionate Neighbour as well as the Community Member. Margaret reflects on the benefits she’s felt by being part of the scheme, “I suppose the pleasure I got out of it was that I knew that there was someone Jane could talk to and ask questions about how to manage some of the difficult things she was coping with, like the death of her sister. I could help her and provide her with reassurance. It’s the giving I suppose that is the pleasure.”

The project is actively recruiting volunteers who are able to spare time to bring friendship to the lives of people who are lonely and socially isolated. Regular training sessions are being run, currently via online meeting platform zoom and volunteers are DBS checked prior to becoming Compassionate Neighbours. Volunteering as a Compassionate Neighbour is a rewarding role where people can build genuine friendships by calling or meeting a local, socially isolated person every week.

For more information on how people can access support, through friendship, and to find out more about becoming a Compassionate Neighbour visit: https://stclarehospice.org.uk/wellbeing-hub/compassionate-neighbours/