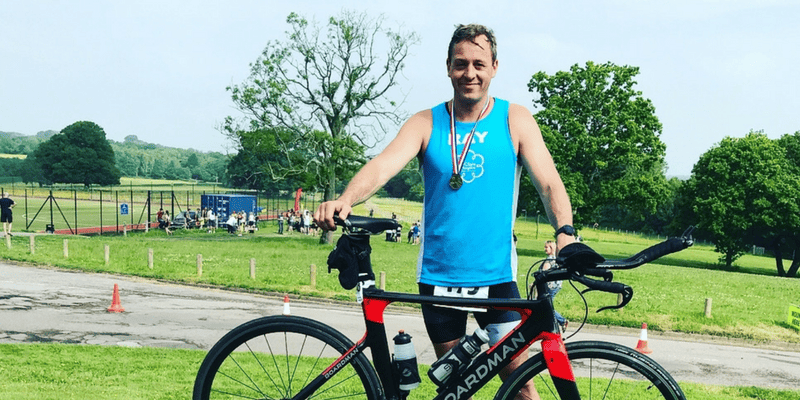 The incredible Ray Cogan, a dedicated St Clare supporter, has completed his 12th race of 2018 in aid of St Clare!

This August, a dedicated St Clare Hospice supporter from Stansted took on his 12th major running race of 2018, in aid of St Clare Hospice and in memory of his friend David Ramm who received care from the Hospice in 2015.

Throughout 2018, Ray Cogan (age 36 years from Stansted Mountfitchet) has embarked on a ‘marathon’ running challenge to complete 12 races in 12 months in aid of the hospice.

As the year has progressed, the father of two has since upped his goal to a staggering 17 major races throughout the year, with his 12th challenge on Saturday 25th August 2018 when he competed in the Lee Valley Half Marathon. Ray’s year of challenges will see him cover over 350 race miles (over 575km) throughout the year, plus an estimated 1,500 in training miles and he aims to raise £6,000 for St Clare Hospice, so far he has raised nearly £3,500.

Almost three-quarters of the way through his challenge, Ray said:

“It has been an amazing journey so far, I have met so many positive people whilst participating in these events. I could not have asked for better support from my friends and the Hospice who have backed me all the way, from donations and supporting me at the events, to even participating in events with me.”

“There have been occasions when I am required to remind myself of the reasons that I am doing this challenge, particularly on the warmer days during the heatwave. I always turn my thoughts to Dave and the amazing support he received from St Clare and how my efforts can be used to generate donations to help other people that need the support of the Hospice.”

Details of Ray’s 17 races are as follows:

“Ray’s challenge to take on at 12 major races in a year was a huge task – but now that he has upped that to 17 races, we are even more in awe of his amazing dedication to raising vital funding for St Clare! This journey for Ray has taken him all over the country, and beyond to Paris. Not only is it a huge accomplishment for him, but he will have raised thousands of pounds for our hospice in the process – money that literally translates into care and support for those who need us in the local community. If you can, please sponsor Ray to reach his target of £6,000 for St Clare!”

“Overall I am very pleased to have made it this far and to be able to generate a good sum of money and support for the Hospice. The journey and challenge is not yet over, though. I still have several more events to complete, the most prestigious one of course being the St Clare Hospice Debden Santa Fun Run! I ask everyone reading this to donate whatever they can, even small amounts help and it all goes towards a great cause.”

To sponsor Ray, visit his fundraising page at: https://uk.virginmoneygiving.com/RayCogan