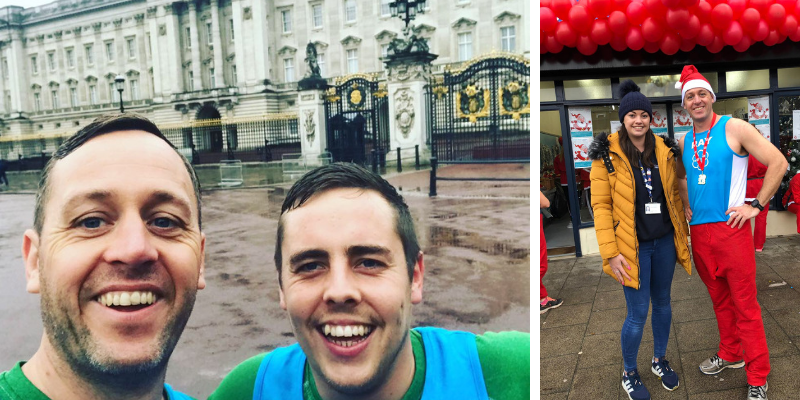 This December, a dedicated St Clare Hospice supporter from Stansted has completed a year of challenges in aid of the charity, and in memory of his friend Dave who received care from St Clare Hospice in 2015.

Throughout 2018, Ray Cogan (age 36 years from Stansted Mountfitchet) took on a ‘marathon’ running challenge to complete 12 races in 12 months, as he aimed to raise £6,000 in funds for the Hospice. As the year progressed, the father of two decided to up his goal to a staggering 16 races – which saw him cover a total of 64 miles swimming, 1,200 miles cycling and 828 miles running (including his training miles).

On completing his epic 12-month challenge, Ray said: “It has been an amazing year. Whilst I recognise that all the swimming, cycling and running in the world could not bring Dave back, it has been comforting to know that people have sponsored me and donated to the Hospice so that they can deliver the same level of care that I observed when Dave and his family were being looked after by the Hospice.”

The 16 races that Ray Cogan successfully completed for St Clare Hospice were:

Emma Broadbent, Challenges and Events Fundraiser at St Clare, said: “Ray’s year-long challenge to take on 12 major races in 12 months was a huge task – but now that he has completed a total of 16 races, we are even more in awe of his amazing dedication to St Clare. Ray truly is a Hospice Hero! This journey has taken Ray all over the country, and beyond, even to Paris. Not only is it a huge accomplishment for him, but he has raised thousands of pounds for our hospice in the process – money that goes towards care and support for those who need us in the local community. If you can, please sponsor Ray to reach his target of £6,000 for St Clare!”

Ray said: “Overall, it’s been a very emotional year but it is also a great feeling knowing that other families will be taken care of in the same way that St Clare took care of Dave, Sophie, Chris, Steve, and all of Dave’s family and friends who visited the Hospice. The St Clare staff are the real heroes in my eyes”.