“Compassionate Neighbours helped me to get back to doing something that I love. Dave gave me the confidence I needed to go out and about again, in spite of my Parkinson’s.” 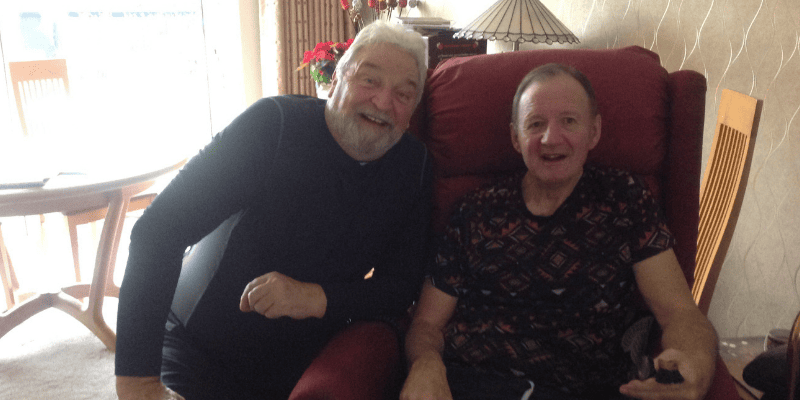 “I first came to St Clare about two years ago, to their Day Therapy groups. My doctor referred me to the Hospice.”

“I was diagnosed with Parkinson’s 16 years ago, but it is only in the last few years that it has really got worse. It’s especially hard work for my wife. Because when I wake up, I can’t move. I am just stuck. My wife comes round to the other side of the bed, gets me in a neck hold, and wrenches me up; it’s not doing her any good. Today was a typical example, I went to bed and I had pains in my legs. The mornings are not too bad once I’ve got started, it’s getting started that is hard.

“Day Therapy was really helpful for me. I got to meet other people with the same condition as me, and it was sort of like, we were on a level playing field. It helped me to talk to people in a similar sort of position as me.”

“Someone at the Hospice said they were setting up the Compassionate Neighbours project and asked if I would like to try it. I will try anything! So I said ‘Yes’.”

“It’s been good! I have enjoyed having Dave as a partner, he’s a really nice bloke. I think we have a similar sense of humour, and we like similar things.”

“This year, Dave and I have been fishing, played chess, played golf, visited Leigh on Sea and Finchingfield. Dave even asked if my wife wanted to go out for the day, with his wife as well, so the four of us went on a trip. He didn’t tell us where we were going, but me and my wife guessed because I also used to drive us to Finchingfield when I was fit and healthy. It’s a beautiful village.”

“Before I had a Compassionate Neighbour, I wasn’t getting out at all. I can’t walk very far and I can’t drive anywhere these days. But Dave has given me confidence, and shown me that I can try different things now.”

“I love fishing, and it is something that has always been a part of my life. My dad fished, and his dad fished. But I stopped when I couldn’t get out of the house easily. There is a lot of equipment needed for fishing, and I would try and carry it all on my mobility scooter, but by the time I got to the lake I would be so tried. So I just stopped.”

“It had been a few years since I had fished, when Dave suggested that we should try going together. Dave drove us to a local fishing lake and we parked up. I don’t think Dave had really fished much before, so I showed him what to do. It was lovely in the sun. We were there for a few hours. We didn’t catch anything, but you’ve got to fish to enjoy. You can enjoy it without even catching anything.”

“Compassionate Neighbours helped me to get back to doing something that I love. Dave gave me the confidence I needed to go out and about again, in spite of my Parkinson’s.”

“It has led me to do other things, without Dave, as well. I have even been fishing with my brother-in-law now, who had never fished before, and I taught him what to do. Compassionate Neighbours has helped to give me the confidence I needed.”

“I think the people who work at St Clare are superb. They are a different class – really class people. And that goes for anyone you meet up there. I feel privileged that I have had time at the Hospice.”

“I first read about the Compassionate Neighbours project in my local magazine, the North Weald Village Life. I had been at a Freemasons meeting a few weeks before and the speaker had talked about the issue of loneliness.”

“It got me fired up to do something about loneliness in my own area, and then I saw the advert for Compassionate Neighbours.”

“I used to do a similar voluntary role, through the Freemasons, where I visited people at home and helped them with their finances – in a role called an Almoner. I often visited people who had been widowed, or were unwell, and I used to try and help them find the positives in their life, and lift them up emotionally. After six years in this role, I decided it was time to retire from it, and let a younger person take it on.”

“So I was looking for another voluntary role to take on when I saw the advert for Compassionate Neighbours with St Clare. I thought it looked like something worth enquiring about.”

“I know that loneliness is a very big problem in our country, and they say that in the near future loneliness could become one of the biggest killers, so I thought it sounded like a project I wanted to get involved with.”

“I came along and took part in the Compassionate Neighbours training, and then was paired with a guy called Harry. I remember meeting Harry and his wife for the first time. We were laughing and joking straight away. We have a laugh and get on well.”

“We are both from a similar background and we have bonded over the things we both enjoy. We have a laugh together, and he takes the mick out of me – and we have the blokey banter together.”

“Early on, during one of my first few visits, I said to him – the sun’s shining, let’s go down to the sea and visit the cockle sheds at Leigh on Sea. I thought it would be good for him to get out in public, and see other people, so we went on a visit to the seaside. Going to Leigh on Sea was amazing, it really showed Harry what he was capable of, and that he could still get out and enjoy himself. We have been out quite a few times together since then. We have been fishing, and I even took him to play some golf!”

“I really think having a Compassionate Neighbour has benefited Harry. Within just a few weeks we were getting out and about together, and he’s grown in confidence so that he now feels he can go out in public.”

“My standout memory has to be when we went fishing together. Harry hadn’t fished for a few years, and I don’t fish very well, but he had all the gear so we decided to give it a try. We didn’t catch anything that day, but Harry absolutely loved it anyway. I looked over at him several times, and he was totally relaxed and I thought ‘wow, he’s really getting something out of this.’ That is all I want to see really, that he is getting something out of his time with me.”

“Being a Compassionate Neighbour is definitely rewarding for me too. I enjoy doing something for someone else on a personal level, and I like knowing that I am helping someone.”

“I am not looking for a reward for myself, but it does make me feel good to spend time making another person happy. It is something for me to look forward to each week as well – and I am only giving up one afternoon of my time.”

“I think Compassionate Neighbours is a first class idea, and I can already see that if you help take someone out of their loneliness, it can benefit their physical and mental health as well, and help them become a different person. I really commend the project for doing that, and I am proud to be part of it.”

“I would say to anyone thinking of taking part in the Compassionate Neighbours project, to just give it a go. To people who might be struggling, and feeling unhappy or lonely themselves, you should give it a try and see if it is for you. You might just be very pleasantly surprised, and meet other like-minded people in a similar boat, who you can talk to.”