“I’ve been blessed with having Jane as my Community Member; she’s a very easy person to get along with.” 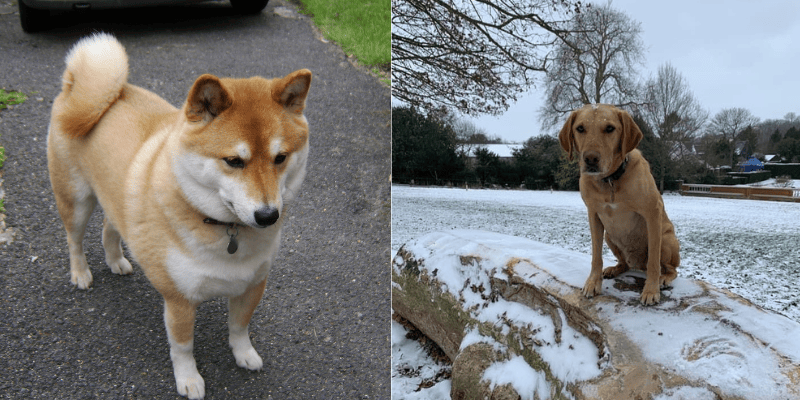 Margaret and Jane have become friends through our Compassionate Neighbours project. They are one of the project’s longest running friendships, having originally bonded through their shared love of dogs.

Margaret has been a Compassionate Neighbour for almost three years. When she began reducing her hours at work, she wanted to fill the extra time becoming more involved in her local community. She saw an article in the local paper about a new project – Compassionate Neighbours, being launched by St Clare Hospice, which was looking for volunteers to bring friendship to the lives of people who were frail, or nearing the end of the lives, and socially isolated.

Margaret was one of the first volunteers to join St Clare Hospice’s Compassionate Neighbours project, in April 2018 and she received training from Compassionate Neighbours manager Stacey Towler on how to build friendships with community members. “It was interesting and highlighted things I might not have considered,” comments Margaret. “Things like remembering not to impose yourself and letting them work out what they want from the friendship; you have to go along with what they need from the friendship, rather than what you might like to help with.”

Following on from her training, Margaret was matched with Jane*, also from Uttlesford, who was recommended to the scheme by the local Citizens Advice Bureau when she was looking for advice about her sister.

Jane lived with her sister and had been her carer but then her sister’s health deteriorated and needed greater care and support so moved into a nursing home. This created a vacuum for Jane, who was used to a busy life of caring and managing home life.

Margaret recalls, “When I met her it was not long after her sister, who had a rare form of Parkinson’s, had to go into a home. Shortly after her sister moved to the care home her beloved dog died, so she went from living with her sister and having her canine companion to being on her own We first met in about November as I recall.”

“Before my sister died, in May 2019, my wonderful dog Griff passed away in the September of 2018,” said Jane. “I named him that after my great grandfather, I’d been doing some ancestry and one of them was called Griffith, so I named the puppy Griff.” Jane is a lover of all animals but was particularly missing her dog when Margaret first started visiting.

Margaret would visit once a week, and regularly brought along her dog, Eddie, who was only a year old when she began visiting Jane.

Margaret remembers how her friendship with Jane developed, “Generally speaking I would usually pop over there on Fridays as this fitted in with Jane’s routine.   I would take Eddie and Jane would have hidden lots of treats and biscuits to find,” recalls Margaret. “Eddie knew exactly where we were going and was always ready for the treat hunt! In better weather we would go out on a walk around the village and occasionally we went over to the garden centre together – just little outings like that.

“Once Lockdown came we carried on speaking on the phone and when the weather was better and we were able to meet outside, we would meet in the street and walk up the lane or around the nearby footpaths. Now it’s cold we just sit on the phone for an hour and we chat away. “

“We sort of seem to get on all right together,” reflects Jane.

“I enjoy the companionship it’s just nice having somebody to talk to.”

“When everything was alright then she used to come here and we used to go for walks, we even went to the local garden centre. Her dog, Eddie, used to come in here too and I used to spoil him – he is such a gently boy, I just hope he hasn’t forgotten me.

“It’s just reassuring knowing her and the dog are there – if I needed someone. I know Margaret’s there for me – it’s just nice to have a friend.”

Margaret considers her friendship with Jane, “I’ve been blessed with having Jane as my Community Member; despite her concerns and sometimes anxious approach to life, she’s a very easy person to get along with. It might have been quite different trying to develop such a strong friendship with someone who was in need of more practical help and support. For me it is just like going round to see a friend; she does her own bits of DIY and is very self-sufficient.”

A core feature of the Compassionate Neighbours is the mutual benefit for the Compassionate Neighbour as well as the Community Member. Margaret reflects on the benefits she’s felt by being part of the scheme, “I suppose the pleasure I got out of it was that I knew that there was someone Jane could talk to and ask questions about how to manage some of the difficult things she was coping with, like the death of her sister.

“I could help her and provide her with reassurance. It’s the giving I suppose that is the pleasure.”

“I’ve also really enjoyed getting to know Jane; she’s a local village girl and it’s been fascinating to listen to her stories about her childhood and what the place was like as she grew up. I find that it’s interesting talking with someone who remembers life when it was slower and is happy to immerse herself in her own locality. She doesn’t really have the desire to venture far afield – I believe she said she’s only been to London once. Nevertheless she embraces modern technology, has a computer and a far more modern TV than I have! I learned a lot from her about local history and her views on life.”

Margaret has also found that her relationship with Jane has helped Jane to connect more closely with her neighbours, especially during lockdown. Margaret had worked with one of Jane’s neighbours and having this shared connection has helped to break down the barriers and connect her to her neighbours in her local community. “When I first started going to see Jane she didn’t seem to have many local connections and now she mentions people’s names and tells me that people have been making a point of popping by and making sure she’s ok. The NHS clapping was quite useful in helping her build these connections as it meant that she was able to meet and talk to her neighbours, especially ones that I had a connection with.

Jane explains “During the pandemic, one of my neighbours has been absolutely brilliant; although I have an online shop every other week, she’s been helping me by getting my grocery bits and pieces. She brings her dog to see me too, he’s an Irish terrier. Margaret worked with her husband for a while. It’s nice to have local connections, people ring up now and say ‘how are you?’”

Margaret adds: “It has been quite nice that she’s been widening her social network through this and gain in confidence.”