“Sylvy is my Compassionate Neighbour, but she’s also my friend. I always look forward to Mondays, it gives me something to look forward to and I know that if I’m feeling down I can always call Sylvy up." 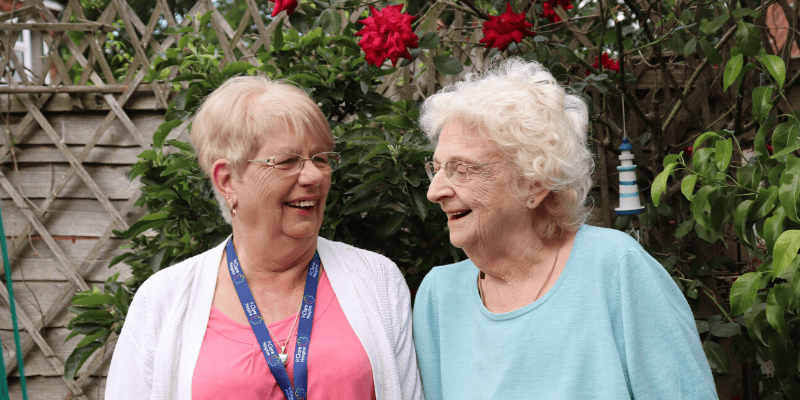 Pam, 80, from Harlow, was referred to the Compassionate Neighbours scheme after the death of her husband Del in September 2018. Pam had been referred to the scheme because of her complex health issues, which were being affected by the loss of her husband. The local funeral directors had also told Pam about the scheme which was being delivered by her local hospice, St Clare Hospice.

“We just clicked straight away,” said Sylvy. “We both lost our husbands last year and I know that we can talk about them together and it’s ok just to talk.

Pam admits that she was feeling lonely, as she had little by way of a support network; her sister in law used to visit every other week – and she has her 9 year old dog Jesse for company – but she didn’t get out or see anyone else.

“I was feeling really down before I met Sylvy. The Compassionate Neighbours is a marvellous scheme, bringing friendship into people’s lives.”

Sylvy, who had taken part in a befriending scheme previously, said that the Compassionate Neighbours project is much more about bringing benefits to both individuals. “After my husband died I had six weeks of counselling, which helped a little bit, but having Pam to talk to about things has helped me so much more. We just talk, and if our husbands crop up on conversations then I know I can talk through how I’m feeling with someone who knows how I feel. The friendship really helps.”

Sylvy was motivated to become a Compassionate Neighbour having previously been a compassionate friend. “I had always wanted to give something back and when I found out more about the project, and that I could start doing home visits to bring companionship, I knew this project was right for me. But it’s got to be a two way thing, it’s got to work for both people and with Pam as soon as I walked in the door I knew that this was right.”