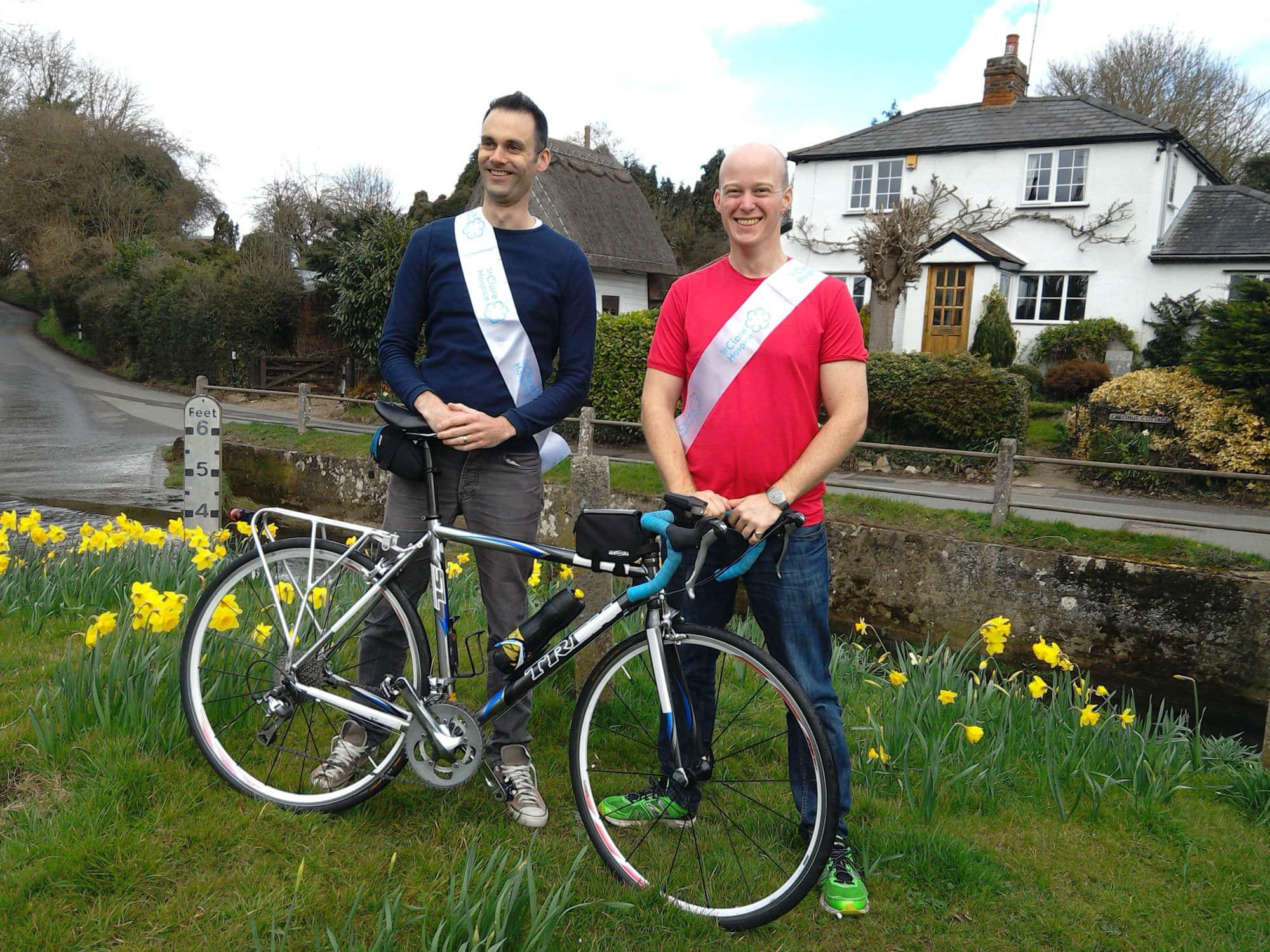 Family raise over £11,000 with athletic adventures!

A family have fundraised over £11,000 for St Clare Hospice in a series of cycling and running feats of endurance following the death of their husband and father.

Lucinda Rhodes (aged 59 from Clavering) completed the London Marathon for St Clare Hospice in April 2016 and has gone on to raise over £7,000 for us after we cared for her husband Shane.

Shane and Lucinda’s son, Ruari Rhodes, was also motivated to undertake a challenge in memory of his father and to raise vital funds for the Hospice. Ruari, along with his brother-in-law Neil Laird and a group of friends, cycled from London to Paris in under 24 hours on Friday 24 to Saturday 25 June.

Commenting on the 200 mile cycle Ruari said: “London to Paris is no picnic – it has taken a lot of dedication and training in preparation and the ride itself was very tough. It was such a fantastic feeling when we cycled in to Paris and we were so lucky that there was not so much as a puncture en route.”

“After a photograph in front of Buckingham Palace we left London at 5:30pm on the Friday – straight into rush hour traffic – with the aim of reaching Newhaven for a midnight ferry crossing. My mum and sister were in the support team and it was special for us to take the Newhaven to Dieppe ferry crossing as that is where my mum and dad first met.”

“We landed at Dieppe and set off again on our bikes at 5:30am on the Saturday. The high point for me was cycling along the Avenue Verte at dawn – a disused railway through the French countryside. It was lovely to ride on, the weather was beautiful, and it was so peaceful with no one else around. Rural France is an absolute joy to cycle.”

Commenting on the challenges they faced Ruari said: “A few of us hit a low point at about 80 miles into the French leg when the physical tiredness and sleep deprivation started to kick in. Luckily we had our wonderful support crew greeting us just outside Paris which buoyed our spirits for the final push.”

The team of cyclists even found time for a spot of site-seeing. Ruari said: “As a little bonus, because we made such good time towards Paris, we had the chance to take a slight detour to the Palace of Versailles. It was well worth the detour – although none of us had appreciated how uncomfortable the cobbled roads would be!”

Ruari was motivated to take on the cycle challenge for St Clare after the care his father received before he passed away from pancreatic cancer at the Hospice in August 2015. Shane was a keen cyclist and, along with Lucinda, had cycled the length of Britain from Land’s End to John O’Groats.

Commenting on the care at St Clare Ruari said: “St Clare Hospice gave such incredible support both to my dad and to my family when we all so desperately needed it. They helped to control his symptoms, provide us all with emotional support, and provide round the clock care. The work St Clare does is indispensable and we are determined to make sure that future families can benefit from their support.”

Ruari Rhodes completed the challenge along with Neil Laird, Tom Bailey and Rob Thompson. Tim Draycott also joined them for the English leg (London to Newhaven) and their friend Nick Dodd completed a solo cycle from London to Paris and back in 48 hours.

Speaking about Nick Dodd, Ruari said: “Nick couldn’t make the date we had chosen so a few weeks ago he decided to cycle London to Paris, then Paris to London, in 48 hours! Somehow he managed to make it to Paris in 19 hours, had a quick bite of dinner, and cycled the return journey in 22 hours. He has managed to raise £590 so far.”

Ruari has raised over £4,200 on his Just Giving page. You can still sponsor him for this incredible achievement at: https://www.justgiving.com/fundraising/Neil-and-Ruari

For more information about how you can take on a Challenge for St Clare Hospice, visit their website at: https://stclarehospice.org.uk/get-involved/challenges/ or contact their Challenges Fundraiser, Jade Clarke, directly on [email protected] or call 01279 773756