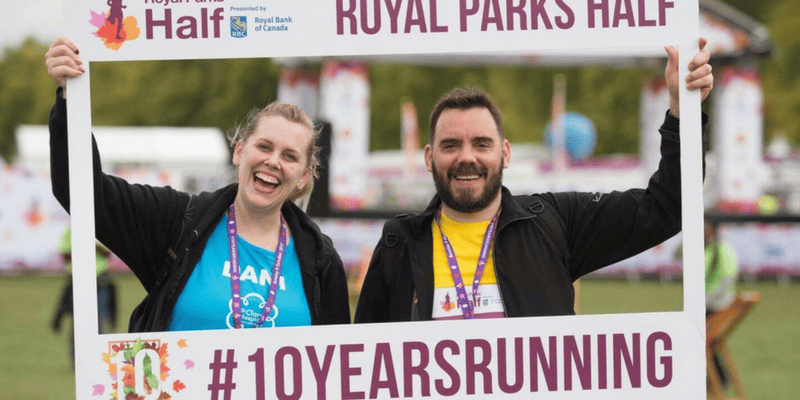 Eleven dedicated St Clare supporters ran the Royal Parks Half Marathon on Sunday 8th October to raise vital funding for us. The Royal Parks St Clare team has so far reeled in a healthy £4,000 in combined sponsorship for the Hospice, with money still coming in.

Amongst the team was St Clare Community Fundraising Lead, Dani De’ath (31 years old from Harlow) who joined us in June 2015. During her service to St Clare , Dani has supported our local community supporters to raise hundreds of thousands of pounds, inspiring her to lace up her trainers and compete in her first ever half marathon.

The Royal Parks Half features a picturesque 13.1-mile route, which winds through four of London’s eight Royal Parks and passes some of London’s most iconic landmarks on closed roads, including Buckingham Palace.

Commenting on completing the half marathon challenge, Dani said:

“Running my first half marathon for St Clare was really special to me, and I feel proud that I’ve been able to do something so challenging to support it outside of my role there. Although it was really tough (my legs are still aching!), it was worth every step knowing it would make a difference to local people who we support here at St Clare. Our collective fundraising of £4,000 is more than enough to pay for our entire Patient and Family Support team for a whole week – which includes vital care from counsellors, social workers, a Child and Family Therapist and a chaplain. It’s amazing really that a day spent running can make such a huge impact!”

“It was an absolute pleasure to watch the team running in the Royal Parks Half, knowing that the vital funding they have raised makes such a difference to the care and support we offer at the hospice.”

“We went to London to cheer the team on every step of the way. Running a half marathon is no easy feat, and it was incredible to see such dedication from eleven individuals who want to support their local hospice charity. Running over 13 miles is a fantastic personal achievement, and I want to say a huge well done to every one of them! Their heroic efforts help us to continue to make a difference to the lives of the local people who need St Clare.”

Sponsored challenges undertaken for Team St Clare, such as the Royal Parks Half, contribute to the more than £180,000 that St Clare receives in vital funding from its Challenges and Events team. The sum is enough to fund St Clare Hospice’s Patient and Family Support Service, which includes social workers, bereavement counsellors and a chaplain, for an entire year.

To get involved in Team St Clare next year, you can take part in the North London Half Marathon for St Clare Hospice on 11 March 2018. Visit the St Clare Hospcie website at www.stclarehospice.org.uk/event/north-london-half-marathon

Registration for the North London Half with St Clare Hospice costs £50, and St Clare ask you to pledge to raise a minimum of £250 in sponsorship. Please get in touch with the Challenge and Events Fundraising team on 01279 773754 or email [email protected] if you are interested in applying.