Amy has been accessing bereavement support from our Echo Project since March 2021. Amy hopes that by sharing her experience she will be helping other children to access the support they need to help them cope. 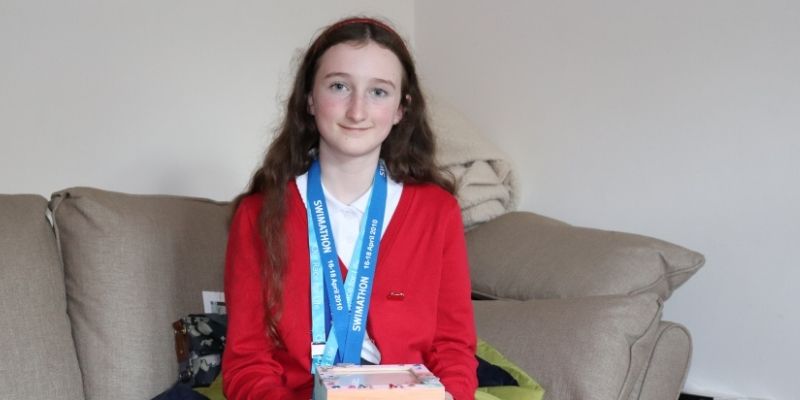 Amy, age 10, started seeing the Hospice’s Adult, Child and Family Therapist, Sara Nicholson, on a 1-2-1 basis in March 2021, as part of the Echo Project – our BBC Children in Need-funded bereavement counselling and support service for children, young people and their families. Amy was experiencing some ‘big emotions’ when she returned to school, after the second lockdown.

“I felt a bit suicidal sometimes,” Amy recalls. “I just didn’t know how to control all of my emotions at once. So I let it off with some really big emotions.”

Sara was already seeing another pupil at Amy’s school, and the school asked if Sara could support Amy as well. “We did sessions at school every week, on a Monday,” Amy explains. “Sara came into my school and we talked about things and we did some pictures and drawings.”

Amy was just five years old when her father died suddenly in his sleep. “As she’s got older, her level of understanding has changed,” explains Louise, her mother. “So her grief keeps on coming in waves almost, because as she gets older he’s missing in all different ways. She got a bit anxious recently because she was worried about forgetting him.”

Louise explains how the counselling sessions have helped Amy to manage her emotions. “With Sara, Amy did a lot of artwork and she started a memory book and it just gave her things to talk about around Daddy and how it felt, which I think helped. During the 1-2-1 sessions it gave her an outlet that wasn’t just me; it was another trusted person. I’m lucky because she does speak to me, which is good, but knowing that she was seeing somebody professionally who could really support her – that gave me support as well. It really helped me to understand what’s it’s like for Amy.”

One of the big things that Sara and Amy discussed was that she ‘felt quite alone because she didn’t know somebody else who felt like that.’

This was why Sara suggested that Amy join one of the Hospice’s Children’s Therapeutic Bereavement Groups. These groups are run by a trained bereavement counsellor and bereavement volunteer, who facilitate a safe, supportive space for children to talk about their loss in the physical presence of other children who are experiencing bereavement. The 8-week group also guides parents in how to support their children through grief.

“Every week, on Monday, for a couple of months I’ll go to this group and do some things to remember my Dad,” explains Amy. “We do stuff that involves arts and crafts and we talk a lot about grief and how to handle it, and coping strategies, but really we just do lots of arts and crafts and stuff. In a way, it’s been really helpful because I get to meet other children who feel the same as me, and it means that I’m not alone anymore.

Amy hopes that by sharing her experience she will be helping other children to access the support they need to help them cope.

“If I hadn’t have had these sessions and meetings and stuff I would have still been in one of those situations where you feel like you can’t do anything to make yourself feel better so it’s really changed my life really. It’s had a really positive impact on me and how I cope.”

Amy adds: “It’s only a tiny bit of support but it helps just so, so much. Because it helps so much, it helps me so much in how I live. Since I started this, I’ve been quite positive and I just won’t let anything stop me.”