“My husband Dave couldn’t have been in a nicer place than St Clare. The staff were excellent and couldn’t have done any more to make him and all of his visitors comfortable.” 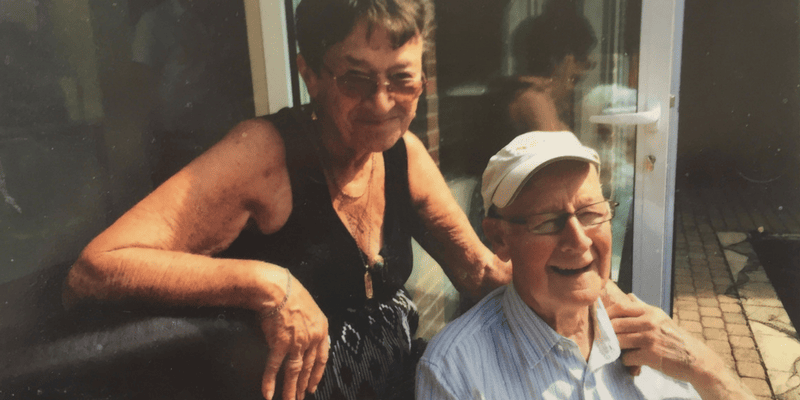 “David, my dear husband (or Dave as my family and friends called him) had such a placid nature, infinite patience and a lovely sense of humour. He developed Parkinson’s when we’d been married for more than 50 years. He didn’t accept that it was Parkinson’s at first. He’d had a fall and broken his hip, which led to the Parkinson’s diagnosis. We decided we would take things one day at a time and enjoy our lives together as much as possible.”

“Over the coming years his Parkinson’s took more of a hold – he had quite a few falls but mainly I managed to tend his wounds myself, with only the occasional visit to A and E being necessary. We did move to a bungalow as I was petrified he would fall down the stairs but we still managed at home with family help and support. Then we were introduced to St Clare Hospice and their wonderful staff and volunteers who all did so much for us, providing support and aids to make our lives easier at home.”

“On the 2nd July 2015 we celebrated our diamond wedding anniversary with our family and friends. Dave joined the men’s Day Therapy class at St Clare each Friday and I was able to enjoy a few hours respite from caring – knowing he was safe and being well cared for. He was unsure at first and was nervous about being without me, but after a couple of sessions he decided it wasn’t a bad idea and he settled down. It was good – he liked it! The people were nice and he got to know them all.”

“Dave would come home and tell me about his steak and ale pie (with Guinness!) for lunch, and praise the chef!”

“Jenny, one of the Occupational Therapists from the Hospice, arranged for us to have various appointments to help Dave and even came and did an assessment of our house for us. She was lovely – they really couldn’t do enough for us.”

“With the Day Therapy in mind, I convinced Dave to take a look at the Hospice Inpatient Unit and we were both so impressed with everything we saw there.”

“After a number of months attending Day Therapy, Dave’s condition began to deteriorate and he was admitted to St Clare’s Inpatient Unit. We weren’t scared of coming to the Hospice, not really at all. It was a gradual thing, so it felt very gentle. It doesn’t come easy when you have to give up some of your independence, but when he came to St Clare’s, I think we both sort of knew that he was ready to let go completely.”

“Dave had a quiet room. Sally, our faithful hound, came in to see him, and I used to stay overnight. It was lovely, because they would lower his bed so that I could hold his hand all night, and if he wanted anything he could squeeze my hand.”

“Dave was in the Hospice for nearly 2 weeks – he liked it. I could bring in all his friends and family and they didn’t feel inhibited at all. Everybody came to see him and it didn’t feel too sad. We felt like we had been given the time to get used to the idea that, this time, he wasn’t going to come home.”

“My dear husband’s life came to an end on the 6th December 2015 in St Clare Hospice. The nurses took such good care of him, and ensured that our home stayed as our home, where the family and our grandchildren could remember the happy memories of their Grandad laughing and talking to them.”

“Dave was my soul mate, a wonderful father to our children and a very special person to our grandchildren who all adored their Grandad. Of course, we all miss him dreadfully but we take comfort in the fact that he died peacefully, with his family and friends around him – at last free from Parkinson’s.”

“We had a gold leaf made for Dave and put on St Clare’s Memory Tree. After a year the leaf was taken down and given back to me as a keepsake. Edward, our youngest grandson, was fifteen at the time and I told him that I thought his Grandad would like him to have the leaf. Edward was so pleased – I knew he would be. I had to bring Edward to St Clare several to times just to look at it on the tree – he liked to look at it. He told me that he couldn’t think of anything better to remember his Grandad by.”

“Marion, the Hospice’s chaplain, came to conduct the service for Dave’s funeral. We had it in the forest at Greenacres in North Weald – it’s so serene there. We could hear the birds singing outside, and that was lovely, too. Marion gave me the support I needed, and said that if I ever wanted to talk about Dave and life without him, I was to come to her.”

“Last November, we were asked back to the Hospice for their Light up a Life service. Marion asked me to do a reading, and say something about Dave, so that’s what I did. It was a very nice way to say farewell.”

“Dave couldn’t have been in a nicer place than St Clare. The staff were excellent and couldn’t have done any more to make him and all of his visitors comfortable.”

“We’ve all got to go at some time, and I just think for myself, ‘I hope they have room for me at St Clare when the time comes’!”