“I had never been to St Clare before and I didn’t know what to expect. But once you walk through those doors, and see how lovely it is, you just breathe a big sigh of relief! You almost expect it to be like a hospital or a nursing home – But it’s not like that. The nursing staff were like angels – they were just lovely. It is just amazing here.” 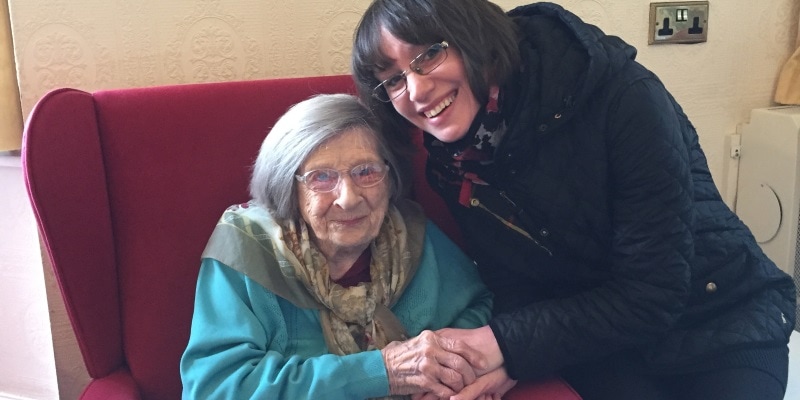 “I first came into contact with St Clare in March 2015 when my Nan was referred from Princess Alexandra Hospital. My Nan, Lily, was 103 years old and was suffering from a blockage in her throat. The doctors told us that there was nothing they could do and that she was dying.”

“It was devastating when we were told this news. There were lots of tears, and cries of ‘this can’t be happening’. It felt like she had been with us so long, she wasn’t allowed to go anywhere.”

“The hospital first suggested finding her a place in a nursing home. My Nan had lived at home, with some help from my aunt and carers, for her whole life. We didn’t like the idea of her being moved to a nursing home. We were in the situation where she needed to move from the hospital, and she needed to move quickly. That was when St Clare was suggested. Enquiries were made and we found that St Clare had a bed for her – and we said ‘yes’ straight away.”

“You almost expect it to be like a hospital or a nursing home – where you walk in and it’s just room after room, and lots of busy people with no time. But it’s not like that. The nursing staff were like angels – they were just lovely. I still have such a fondness for all the staff – I want to hug them all! It is just amazing here.”

“My Nan was quickly moved from the hospital to a room on St Clare’s inpatient unit. I then came to visit her most days on my way home.”

“The opportunity it gave me was enormous. I got to spend some wonderful time with her in the last section of her life – and no one can take that away now.”

“My Nan stayed at St Clare for 3 weeks. The social worker at St Clare was in the process of helping us to find a nursing home for her to move to, but she passed away before we secured a place. It was actually better for her because she didn’t have to go through the stress of moving again. If she had to die, St Clare was the best place for her to be when she did. We knew that she had lovely people looking after her, in such an amazing place.”

“My Nan, Lily, passed away on 11 April 2015 at St Clare Hospice. I was actually in Brighton, about to take part in my first major 10k race, when I got the call from my Mum to say she had passed away. It was so hard because all I wanted to do was get in my car and drive back to St Clare.”

“But my Mum told me, ‘No, you must run it for your Nan’. So that is what I did. I ran that race for her. The next year, in 2016, the Brighton Marathon fell on the date of my Nan’s anniversary. So I signed up to run my first marathon with St Clare. It meant so much to me to be raising money for the hospice, but it also meant so much to me in remembrance of my Nan as well.”

“I ran the Brighton Marathon on 11th April 2016 for my Nan – and to be honest, when I crossed the finish line, I said I would never run a marathon again! But then I was persuaded by a running friend to enter the London Marathon ballot for April 2017. I know the chances of getting a place are so slim that I thought it wouldn’t be a problem. But then I went and bagged a ballot place! I knew I was so lucky to get a place in this world famous marathon and without a second thought I knew I would raise money for St Clare. It was obvious.”

“But I have stepped the challenge up even more since then. Once I realised I would be doing lots of training in order to run the London Marathon on 23rd April 2017, I realised I could also use other races as part of my training.”

“My first race is in January when I will be doing the Benfleet 15 – a fifteen mile off-road race! Apparently there’s a really big hill – I have roped people in to drag me up if needs be. It does say that it’s a challenging one, its muddy and one year it was snowing. Then in February I will be doing the London Winter Run, a 10k winter-themed race. There are people dressed up as penguins everywhere, and you get to hug a polar bear at the end! March is the Silverstone half marathon, April is the London Marathon, and then a week later in May I am doing the Milton Keynes half marathon! It is so soon after the London marathon, but even if I have to walk it, I will finish it.”

“St Clare means so much to me, and so do these 12 races. If I get through them all, at the end of the year I will have 12 medals to show for it – but actually, it is really about all the money I will raise for the hospice.”

“For me, I started running as a way to keep fit, but it’s different now, it means something different to me. Since my Nan passed away on the day I did my first major race, the two things are now connected together for me – losing my Nan, and running. I just hope I can raise as much as possible this year so that St Clare can continue to do its amazing work.”