“That session on anxiety was very useful; it meant a lot to me. I learnt some techniques about how to talk to myself that I now use. It really helped me to know what my triggers are when it comes to the anxiety I’m feeling." 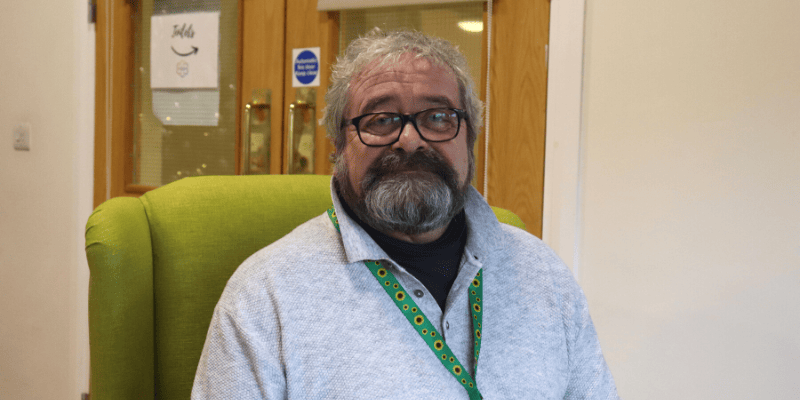 Garry is an avid music fan and drum enthusiast. He lives with COPD and was referred to St Clare Hospice for rehabilitative support, to help him breathe more easily.

Garry had always been a very active man, but now gets short of breathe from just a short walk. “I’d do anything to dig a hole and fill it up again,” he laments.

One of the Hospice’s Physiotherapists called Garry one day. She asked him if he’d consider taking part in one of the Hospice’s Breathlessness Groups online. The Therapy team developed a virtual version of a group, which was running before the pandemic.  It is now one of the specialist groups and clinics that are part of St Clare Hospice’s Wellbeing Hub service.

Following on from the Breathlessness Group, the Therapy team asked Garry if he’d like to take part in the Wellbeing Hub’s new Living Well programme. This six-week course helps people to maintain their independence and live well with life-limiting conditions.

“It was brilliant,” says Garry.

“I’m not very good at opening up in front of people but I could say things in that room that I can’t talk about with my family. I found myself looking forward to coming. It surprised me after the first meeting – I was pleasantly surprised.”

The course covers a range of topics. Participants are encouraged to share their experiences with others in the group. The coping with anxiety session was one that Garry found to be extremely helpful. “That session on anxiety was very useful; it meant a lot to me,” Garry explains. “We covered so many topics in those six weeks and they were all helpful but the whole six weeks were worth it just for that one session alone. I learnt some techniques about how to talk to myself that I now use. It really helped me to know what my triggers are when it comes to the anxiety I’m feeling. Some of them I’ve been able to work out myself, but going through it together has really helped me. I think that’s why I’m so very grateful for having been able to join the Living Well programme.”

Although Garry had done a rehabilitative course before, he found it useful to be reminded of breathing techniques as part of the course. “It’s just one of those things that you need to be reminded of to keep doing it,” says Garry.

Another huge benefit for Garry has been finding others who he can talk to about how he’s feeling.

“I can talk to the guys that I did the Living Well programme with – I call us the ‘Three Amigos’! Some of the best medicine is laughter and we did a lot of that during the course. It just feels like I’m in the same boat as them. We have different health issues but we’re all pointing in the same direction. It just feels like I can talk to them without putting a burden on them.”

Garry has continued his friendship with the ‘Three Amigos’ since finishing the six week Living Well programme. He often meets them at the Hospice’s Café Clare on a Friday morning. They also set up a WhatsApp group so that they can support each other outside of the Hospice. “Staying in touch just helps to build the friendship and stay connected,” Garry comments. “Staying in touch with the lads also reminds me to look after myself and stay in touch with my own self-care.”

Garry concedes that he had thought that hospices were ‘finishing homes’ – somewhere where you go and stay in a bed until the end. Since he started his journey with St Clare, he’s become a bit of an evangelist.

“I didn’t get the concept of the hospice until I came here.”

Now, I even tell the old blokes down the pub what it’s like at St Clare and how they can help someone like me to feel better. I just didn’t think it existed.”