"We are all in shock and St Clare Hospice is picking up the pieces." 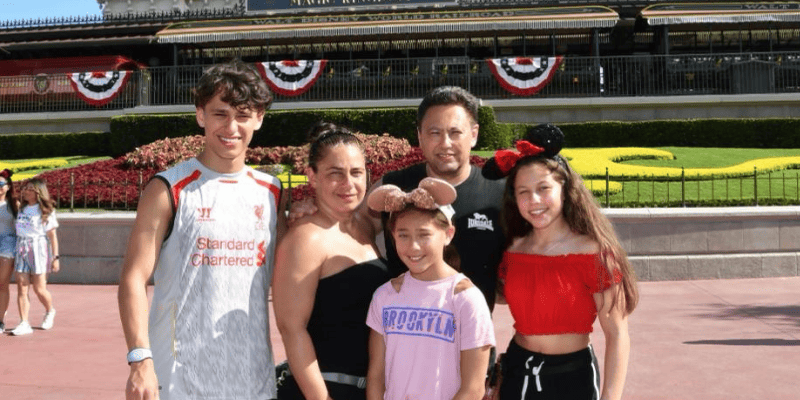 Keely is a mother of three from Harlow who was admitted to our Inpatient Unit in October 2021.

Keely had been living with back pain for about a year. Her Mum had recently died, and she had lost weight and was suffering from gastric problems, too. The family thought this was all part of her bereavement, but as the back pain continued, Lee, Keely’s husband, insisted she went for an MRI.

“Keely is stubborn so we had to really persuade her to go for the scan,” said Lee. “We all thought it was going to be a slipped disc, but the consultant wasn’t happy with what he was hearing and what he saw on the MRI. He didn’t think the pain that she was feeling was relevant to the disc issue, so he asked her to go for a full MRI. When she went back 2 weeks later, with Keely expecting him to diagnose a disc problem, the doctor said, ‘Unfortunately I have to tell you that you have cancer, and I want you to go immediately to A&E.”

Keely had untreatable lung cancer which had spread to her bones. She was admitted to hospital. Her whole family were in complete shock.

“I would get phone calls from Keely at 3am saying she was in pain and was waiting for her pain-killers. Everyone was doing their best, but they just couldn’t get her pain under control. Because the consultant had told me that Keely’s condition was life-changing, I reached out to anyone I could think of and sent an email to St Clare Hospice. It got picked up and St Clare Hospice’s Palliative Care Consultant, Jonathan, came to visit us in hospital. Keely was a bit confused and started crying. I’ll never forget Jonathan’s reaction. He got down on his knee in front of her and gave her a tissue. The compassion and empathy was there from the start.”

Keely added, “That made such a difference. We all relaxed.”

Lee continued, “They explained that they would like to admit Keely to the Hospice, but she wasn’t happy about it.”

“I thought it was going to be very depressing,” said Keely, “I thought it was a place where people come to die and it would be very sombre. It is the complete opposite. It is almost like a hotel, which is a strange way to put it. It looks nice; it is pretty; it has flowers everywhere. Everyone is smiling and caring, and they have the time for me. Whether that is the volunteers, the cleaner, the cook. Everyone.”

Lee added, “As soon as we arrived here, we all relaxed. Being here has made a huge difference for me and the kids. When they came in the room, they chucked themselves on the bed and chilled.

“To be able to be all together as a family. Honestly, I don’t think people realise that it’s the small things that are big. That is what we would like to get over to other people about the care here at St Clare.”

“Here they have time for Keely,” said Lee. “It is Keely focussed. If she is upset or distressed, there is always time for her. I don’t have to worry so much when she is here.

We are sad to update this story to say that Keely died at our Inpatient Unit on 30th April 2022. Her family and friends are in our thoughts.