“When you are told you have got limited time to live, it actually does make you appreciate the time you have. You’ve really got to enjoy what you’ve got.” 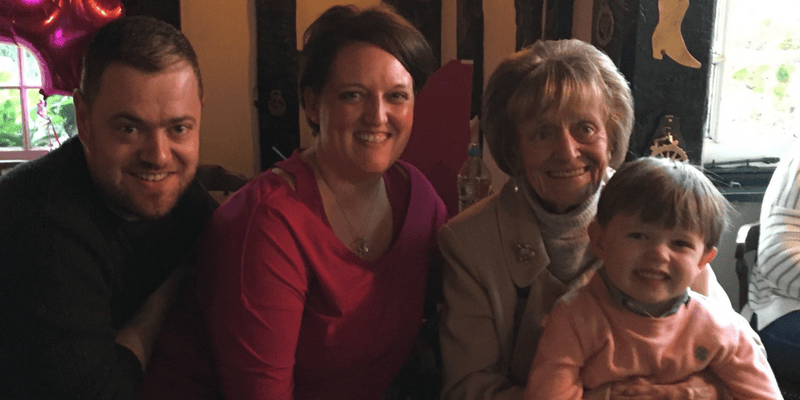 “My Nan was first diagnosed with cancer in 2009 when she was in her seventies. Nan underwent chemotherapy – my uncle remembers her having chemo on her 75th birthday – and she eventually went into remission. At the time she didn’t really share that much about her illness with me. I think that she wanted to protect me from it, and so she didn’t really go into too much detail.”

“Then in May 2016 Nan was diagnosed with lung cancer and this time she said categorically that she didn’t want to have chemotherapy again. She said she didn’t want to go through it again, and so her choice was to not treat it. The doctors estimated that she only had a few months left to live.”

“My Nan was very independent – she didn’t like to rely on other people. But towards the end she became willing to accept some help from other people, including St Clare. My Nan came for Day Therapy at St Clare and she used to really like coming to the sessions. Nan always liked to have a chat and I think she found talking with other people who were going through the same thing as her, quite helpful and reassuring.”

“Day Therapy was good for her because she got to know other people in a similar position as herself, and she could be here on her own terms. That was important for her, to have control.”

“My Nan came for Day Therapy groups at the Hospice as an outpatient and she would always speak really positively about it. She said the people were so lovely and she always made it sound very ‘home from home’.”

“Nan was very independent. She lived on her own in a warden-assisted bungalow in Harlow. But if you ever had a conversation with her about what she wanted to happen when she died, the one thing she said was that she didn’t want to die alone in her house. She made the decision that when the time came, she would like to come and stay at St Clare Hospice.”

“In December 2017 Nan became quite frail and she was struggling to eat. It was during the really snowy weather just before Christmas that Nan was admitted to St Clare.”

“I didn’t know much about St Clare before I came here to be honest. I wasn’t even really sure where the Hospice was exactly! The first time I came to St Clare was when my Nan had been admitted to the Inpatient Unit.”

“Let’s face it, you say the word ‘hospice’ and you sort of run a little bit cold. I thought that if people die at a Hospice, it’s not exactly going to be a very cheery or happy place. That’s what I imagined before I came.”

“But nothing compares to what it is really like. When you walk in it just feels very light and airy – although you think it is going to be dark and sombre – but you don’t get that impression at all.”

“I came in to visit her for the first time with my three year old son, Ruaridh. My Nan absolutely idolised her great-grandson Ruaridh, and he loved his ‘Nanny Little’, so I really wanted to bring him in to see her.”

“I was concerned about whether she would look too ill that he wouldn’t recognise her, so I checked with my family before we came to see her. They said that Nan just had an oxygen tube in her nose, and Ruaridh asked her about it when he came in. But, like with many 3 year olds, when she told him what it was for, he was happy that he had an answer and he wasn’t phased.”

“Ruaridh sat next to her bed playing Lego, and it was so special for them to spend that time together.”

“Nan’s room was lovely; everything was so clean, new and modern. They even had special lights in the bedroom that shine different colours! My Nan had such a fun sense of humour – we used to really giggle together. Nan liked the fact there were no restrictions at St Clare – she could sit outside on her patio and have a cigarette if she wanted; just like being in her own home.”

“The Hospice had a special air about it because it was Christmas time. There was a big Christmas tree and decorations everywhere, and one lunch time they had carol singing.”

“When you reflect on that, and you look back at the time we spent here, it was actually a nice experience – even if that sounds like a weird thing to say.”

“I was visiting my Nan at St Clare when she said to me that she wanted to find a way to thank the Hospice for their care. That was when I suggested that I make a Charity CD for St Clare.”

“A number of years ago I worked on a cruise ship as an entertainer – hosting, comparing and singing. A friend of mine called Paula wrote to me whilst I was on the ship. I remember being sat in my cabin, and receiving post was the highlight of my week!”

“I received a letter with really meaningful words, and I just picked up my guitar and started to play and turned the letter into a song.”

“When I saw Paula next I played the song for her and she loved it. Paula kept saying that the song would be perfect as a charity single, and that it should be sold to raise money for a charity. But until now, the song has just been sat on my laptop, doing nothing.”

“The song is called ‘What a difference a year makes’ and is all about what is important in life, and appreciating the time that you have.”

“When you are told you have got limited time to live, it actually does make you appreciate the time you have. You’ve really got to enjoy what you’ve got.”

“So when I spoke to my Nan a few weeks before she died, she said that she wanted to do something to raise money to thank St Clare, it seemed like the perfect opportunity at last. I played my Nan the song at her home on a portable speaker. Nan had never heard it before, but as she listened to the lyrics about how you should live your life, she kept saying ‘yeah, I’ve done that, I’ve done that’ – ticking them off! The lyrics to the song were really relevant to my Nan and she said she really liked it.”

“It was great because she wanted to say ‘thank you’ to St Clare and didn’t know how – and my song helped her to do just that.”

“I checked with Paula that she was happy for me to use the song in this way and she was so happy that she even sent me a cheque which helped me to get the CDs made up professionally. Whilst I didn’t manage to get the physical CDs made in time to show my Nan, I did manage to show her the CD cover and she said that she liked it.”

“Towards the end I came to stay with my Nan in her room. It was good that her family was able to sleep in her room, so she wasn’t on her own. It was lunch time on Sunday 17th December when she passed away. I was there with my Dad and my aunts and uncles. It was just how she wanted it.”

“Speaking to my Nan about her life, and the words of the song, it was so good to hear that she did everything that she wanted to do in life. It is reassuring that we spoke about that, and that is how she felt about her life.”

“I was distraught when she died but at the same time I’m just so pleased that she was at peace. She also didn’t die on her own, and that is the main thing that she was worried about.”

“So far I have raised over £500 for St Clare by selling the CDs – and I am happy that I now feel like I have done what I set out to do for my Nan, just as she wished.”

Get your copy of ‘What a difference a year makes’

You can get a copy of the CD ‘What a difference a year makes’ in the Main Reception of the Hospice in Hastingwood for the suggested donation of £5.

Alternatively, if you cannot get to St Clare Hospice, you can contact Kerry on [email protected] to arrange getting a copy of the CD.