“I came up to the hospice and Angela looked so relieved. That’s the only way I can describe it. It was like the whole weight had been lifted off her. Angela said to me ‘I can’t tell you how nice it is here Kim, nothing is too much trouble. I feel safe.’” 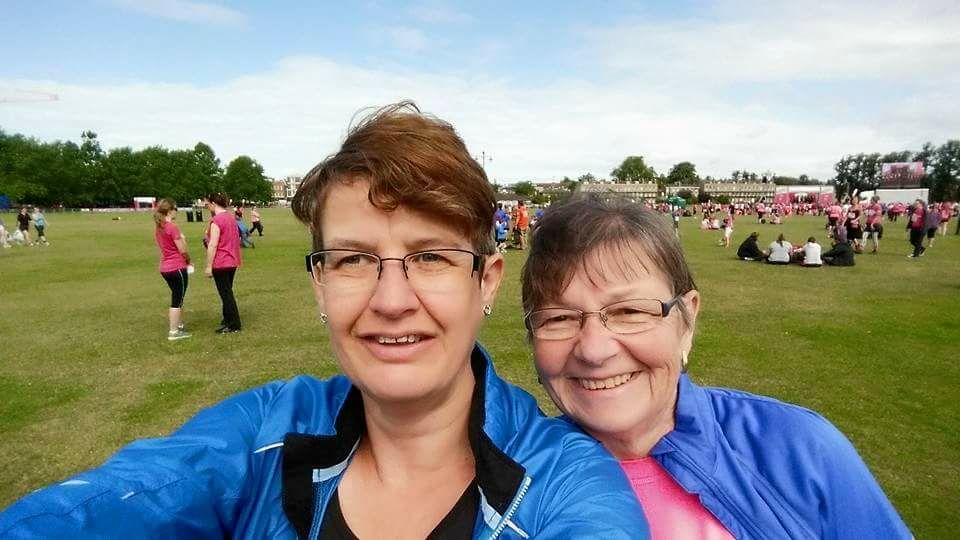 “Angela and I first met at a slimming group in Bishop’s Stortford, where we both lived, back in 2011. We got talking to each other, and we just hit it off. I was also part of a running group in Stortford called Girls Go Running, and I persuaded Angela to join me and take up running – and she did! We took up running together to get fit, and to help lose some weight. Like most people, Angela thought ‘I could never run’ but she thought she would give it a go. We started off slowly, and built up, and Angela loved it – she really got into it!”

“The first race that Angela and I ever did together was the St Clare Hospice 10k. That was back in 2013. It had a tough hill at the end – I remember us both swearing as we ran up it!”

“Angela and I used to run with the Girls Go Running group, but you tend to find you gel with one person more than the others, and Angela and I used to arrange our own running meets. We ran a lot together, we had the same interests, and we used to talk all the time we were running. I always say, if you can’t talk when you run, then you are going to fast!”

“Angela and I used to speak on Facebook and it was one evening when, after a few too many rums, that I suggested we sign up for a marathon. I had always wanted to run a marathon before I turned 60, and I was 59 years old at the time, so it was now or never. Angela must have had too much to drink too – because she agreed. We both tried to enter for the London Marathon 2016 and hoped for a ballot place. When we didn’t get one, we both applied for the Manchester marathon instead – and were guaranteed a place. That’s when the realisation of what we had done hit us!”

“Angela and I ran the Manchester Marathon together in April 2016 – just before my 60th birthday in the June.”

“Unfortunately Angela was taken ill at mile 24 and she had to finish in an ambulance – but it was still a great achievement. We had been planning to cross the line together, and celebrate together, so it was an anti-climax – but Angela was alright and she got two medals and two t-shirts out of it! One from the ambulance crew, and one from the marshals at the finish line. We said we would never run a marathon again, but by the time we reached the M25 we were already going online and signing up for the next one! We booked in to do the Liverpool marathon in 2017.”

“The other thing on my pre-60 list of things to do, was to visit Ireland. Angela was Northern Irish, from Comber, Co. Down, and so in the September we went for a weekend there with another friend. We had an incredible time, with Angela showing us round Belfast, learning all about the Troubles, and visiting the Giants Causeway.”

“It wasn’t until January 2017 when Angela started getting pains in her hip. We just put it down to a running injury – and the doctors thought the same and sent her for physio. But she was getting worse and worse and by Easter she was in so much pain.”

“Then on my husband’s birthday, 16th May, Angela went to get the results of all the tests she had been having. Angela just messaged me and said ‘It’s cancer’. I just couldn’t believe it.”

“From then, it just went so quickly. I visited Angela in hospital five days later, but then I couldn’t get hold of her. I was told she had been discharged, and so I went to her house with some flowers, but I still didn’t hear from her which I thought was odd.”

“Then one Friday night when I was driving home from work I got a call from Angela. She sounded so relieved. Angela said, ‘I’m in St Clare’s.’”

“Angela said she was so relieved to be at St Clare’s and that I should come up and see her.”

“I came up to the hospice that evening and she looked so relieved. That’s the only way I can describe it. It was like the whole weight had been lifted off her. And she said to me ‘I can’t tell you how nice it is here Kim, nothing is too much trouble. I feel safe.’”

“That was what was so important. Angela was in a lot of pain in the hospital, but she knew what once she was at St Clare they would keep her pain under control. Angela felt safe, she knew she wasn’t going to be in pain anymore, and she’d accepted what was going to happen to her. And she couldn’t have been in a better place.”

“To see Angela safe and relieved was great. She never told me how long she had, but she told me in so many words that she wasn’t going to get any better.”

“Angela was more concerned with what other people were feeling. I have never met anybody as brave, ever.”

“The way the nurses talked to Angela was great. She said to me, if she woke up in the middle of the night and wanted something to eat, they would go and make it for her. Angela said it was amazing.”

“It isn’t what you expect a hospice to be like. You think ‘Hospice – it’s going to be awful. Everyone is going to be crying.’ And yes, there must be times when people die and there is crying, but on the whole it is a cheerful place.”

“The Friday before she passed Angela had an Indian take away with her sisters-in-law and friends, everyone in her room, gathered round. She loved an Indian!”

“All the girls came in for a Friday night take away – and that sums up St Clare. They make it normal for people. They allow people to enjoy the things they have always loved.”

“Angela couldn’t eat very much at the time but she just enjoyed the whole experience – managing to eat a little of her favourite curry and enjoying the smells. And it meant she got to have one last girls’ night.”

“Angela told me about the amazing bubble bath she had, in a Jacuzzi with special lights and everything. She said it was lovely. It’s things like that which make all the difference, and make people feel special at that time in their lives. The staff at the hospice have the time, and the number of staff, and the equipment, to be able to give that special care. That’s the nicest thing about the hospice.”

“I came to see Angela on the Sunday and she asked me if I would knit a jumper for her son. I said of course and the next day I went straight out to buy the wool and start knitting it for him. I was knitting like mad on the Monday night and sent Angela a photo of what I had done so far. I thought she would be asleep but she replied straight away to say it looked great. I messaged to say goodnight, sleep tight, and that was the last time I spoke to her. Angela went into a coma the next day.”

“I have knitted the jumper, but I have got to the point where I can’t sew it up and complete it – because then it would be over. I think it’s psychological. The running is like that as well. I said to Angela that I didn’t want to run with anyone else, but she said I should.”

“Angela asked me to raise money for the hospice. I said of course I would do – I would fundraise in her name. I told her I would run the London Marathon for her – she said it was too far but I told her not to worry about that. She also asked me to get as many of the girls as possible from the Girls Go Running in Stortford to do the St Clare 10k in April. They have all agreed to do it if they can, so we are expecting a really big turnout on 8th April.”

“Angela passed on 14th June 2017 – having been diagnosed with cancer on 15th May. It was such a short time, just four weeks. Angela just didn’t deserve it, not at 52 years old. She really didn’t deserve it – but then, who does?”

“Cancer touches so many people – every family. And so many local families lives are touched by St Clare at some point. It is just so good that there is somewhere like St Clare.”

“To have someone to care for Angela when she was so ill, and somewhere that her family could come and know that she was being well cared for, just meant so much. To know what Angela was safe, and was not in pain, I think it helped the whole family – not just Angela.”

“So, that’s why I am raising money and running a marathon – because you gave Angela the best possible last days she could have – and to see the relief on her face when she was in St Clare’s was amazing.”

“Angela and I had both entered the ballot to run the London Marathon 2018. I obviously don’t know if Angela got in or not – she passed before the places were sent out. So I will be running London for Angela. I am going to have Angela’s name on my top, as well as my name. So she is with me all the way round.”

“Although Angela won’t be crossing the line with me physically, she will mentally cross it with me.”

“So, I will do my best to raise as much as I can for the hospice – because that’s what Angela asked me to do. She knew I would as well – she knows what I am like with fundraising! I am a doer. We have already held a quiz night fundraiser in Angela’s name, and a curry night. I am planning another quiz and an event at Harlow Dogs to raise funds.”

“The thing is, when someone goes through what Angela went through, you feel like you want to do something. I felt like there should have been something I could do to help Angela – but there was nothing I could do. You feel so helpless. So the thing I can do is fundraise.”

If you would like to sponsor Kim for her London Marathon challenge, and support St Clare Hospice, please visit her fundraising page at: