“St Clare couldn’t do enough for us. I was so impressed by it all – the level of care and compassion from all the people that work and volunteer at St Clare.” 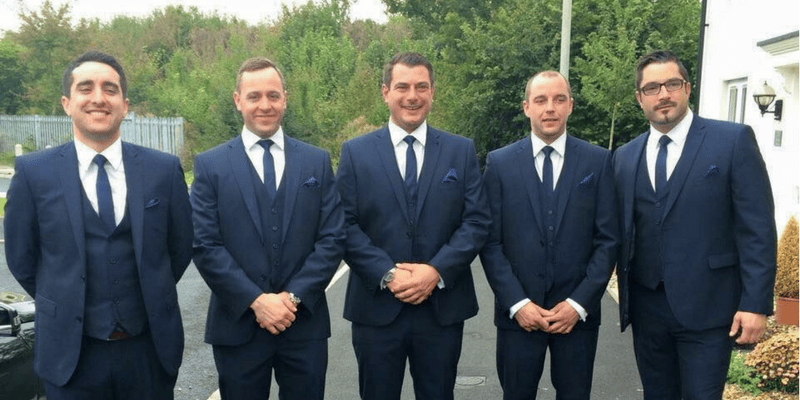 “We were really old school friends – friends from secondary school right through – so I guess nearly 20 years. I was Dave’s usher, along with Phil, Kieran and Dave’s brother Steve, who were his best men.”

“Dave and I were never out of touch with each other. Some friendships you dip in and out of, but that was never the case with me and Dave.”

“Dave was such a good man – and a good laugh. We had some cracking laughs together. He was loud! Such a loud character and he was tall and broad. The sort of person you couldn’t help but notice as soon as you walked into a place. We used to call him the ‘foghorn’ because you could hear him for miles! He was just good fun, and he was very hard working, and he was so committed and dedicated to his wife Sophie.”

“I remember when I first found out that Dave had cancer. It was September 2015 and I was on holiday in Croatia with my wife Steph, who was pregnant at the time, and I had a phone call from our friend Kieran.”

“I thought it was strange he was calling me when he knew I was abroad, and when he answered he told me to take a seat. Then he just said ‘Dave’s got cancer’. It didn’t really register when he told me – I didn’t really clock it then. It was like he’d told me Dave’s got the flu. Kieran said that Dave had a bad back on holiday and had to come home early. I knew then that it must have been bad because Dave is a tough cookie – he’s not one for moaning at all.”

“It was only when I put the phone down and told my wife that it really hit home. I phoned Dave up and, God bless him, he did actually sound he was carrying it off like he just had flu. He said ‘I’ll be alright, it’s just a bit of cancer’ – that was his mentality. And for me, I thought he would survive on that mentality alone. I thought that would pull him through – the power of the mind. But unfortunately that wasn’t the case.”

“So then Dave was admitted to St Clare in October, just a few short weeks after he had been diagnosed. I tried to get up to St Clare at least three times a week to see him.”

“Sometimes I would just drive him round to McDonalds to have a burger and a crafty cigarette – if that’s what he wanted to do I was happy to help him do it! I said I wouldn’t tell his wife Sophie.”

“I came to see Dave as often as I could at St Clare, even if I just drove down after work for a couple of hours to spend time with him. He wasn’t in a good way, he was on some really strong painkillers, so I would just sit there by his bed – I just needed to spend as much time as possible with him. Even if he wasn’t awake, it was important to me to spend a bit of time with him.”

“Then you would also be talking to some of the guys and find out they were actually volunteering. They had full time jobs and would be helping out in the evenings as well. I was just like ‘Wow’. You know, these volunteers have obviously got their own lives to live, probably have children and a husband or wife at home, and other hobbies they could pursue – but they choose to come to St Clare in their own time and devote their own time and effort.”

“I just remember thinking, giving up your time to help other people at a very difficult point in their lives, is a very selfless commitment and an honourable thing to do.”

“The night Dave passed away I was about 10 miles away and I came straight to St Clare. The whole family was here and again I was further impressed by the efforts of the hospice – they couldn’t do enough for us.”

“As soon as I arrived at St Clare they were offering me a cup of tea or something to eat, you know, making a fuss – it was nice.”

“St Clare did so much for everyone, not just for Dave, but for his friends and family as well.”

“That’s where my connection with the hospice really roots from – identifying that level of care and compassion from all the people that work at St Clare. I was so impressed by it all.”

“I obviously got upset when Dave died because he was a long term friend, but what really upset me was the fact that Dave and Sophie had only just got married. I just thought, Sophie must be in an absolute world of pain – she’s just married the love of her life, they had just moved into their new house, they were probably planning a family.”

“I remember being at that stage with my wife Steph – just married, planning a family, it was so exciting. You’ve got so much to look forward to and your whole life is in front of you. You’ve got it all planned out in your head – but it never works out that way. To have it all taken away within a matter of weeks, when Dave was just 35 years of age, is just so upsetting.”

“Dave probably had other ideas and ambitions – about starting his own business and raising a young family. He had things he wanted to achieve on a personal level – and it’s just been taken away from him. It’s just cruel.”

“Unfortunately it’s a fact of life that people get cancer and die from it – you can’t always avoid that. But it doesn’t stop it being unfair. That’s what upset me the most; the fact that Dave was young and all that lost opportunity. Dave’s life had so much potential, and so much to give to a young family and his wife – it’s just a very sad scenario.”

“Recently I knew of another young man who came to St Clare and died here. My wife knew him and went to his funeral – he was only in his thirties. It’s another example of the hospice caring for someone.”

“You don’t realise how well known St Clare is – it touches so many people. I mentioned St Clare at work and as soon as you say the name of the Hospice people say ‘it’s such a great place’.”

“My first chance to fundraise for St Clare was when I helped Dave’s wife Sophie when she was organising a Ball. I spoke to a gentleman there who had a ballot place for the 2017 London marathon and he asked me if I wanted it – because he could see it meant more for me to run it for Dave and St Clare. So he gave his place to me! That was my second time running the London Marathon and I raised over £3,000 – and in 2018 I will be running it again with Team St Clare.”

“The first time I ran a marathon was when I was in army. I had to be fit because it’s part of the job and I’d always enjoyed running. I went into work one day and the Sargent Major came up to me and asked me what I was doing at the weekend. He had a place in the Abingdon Marathon and he couldn’t make it any more. I knew I had to say ‘Yes’ or I would lose all credibility – so I said I would run it at three days’ notice! I had only run 5 miles before, so I didn’t know how I could possibly run a marathon, but I did. I ran it in a good time of 4 hours 9 minutes, considering I had done no training. Then I caught the bug for marathon running!”

“I moved on to doing triathlons, which I love. My first triathlon had a sea swim – which people said would be too hard for my first triathlon. But I am an ex-army diver, so it didn’t matter to me. I loved it!”

“When St Clare advertised that they had places for the 2018 London Marathon I decided to apply and fundraise for Dave again. When I went along to the marathon evening event, there was a St Clare runner from last year, Clare Gallagher, who gave a presentation about her 12 challenges in 12 months for St Clare. As soon as I heard her speak about it, I thought, I want to do that! I always think, if someone else has done it, I can do it too. I went home and started planning what challenge I can do each month in 2018.”

“I have ended up booking a total of 13 races in 12 months – one a month just wasn’t enough! I am most excited about London Marathon, this will be my third time running it and it’s incredible, but I am also really looking forward to doing the Paris Marathon too. They are both in April, only 2 weeks apart, so I am bit crazy taking on two marathons so close together.”

“I will be running over 250 race miles throughout the year, plus around 1,500 in training miles. I will be finishing with the St Clare 5k Santa Run in Debden in December – which will be a really nice way to round off a year fundraising for St Clare. The challenge will be tough for me, but I just know how much St Clare helped Dave and his wife Sophie, and that will spur me on to complete it.”

Sponsor Ray for his 2018 Challenges

If you would like to sponsor Ray for his year of challenges in 2018, and support St Clare Hospice, please visit his fundraising page at: https://uk.virginmoneygiving.com/RayCogan