“Volunteering has given me back far more than I could ever have imagined. You feel fulfilled, it’s given me purpose.” 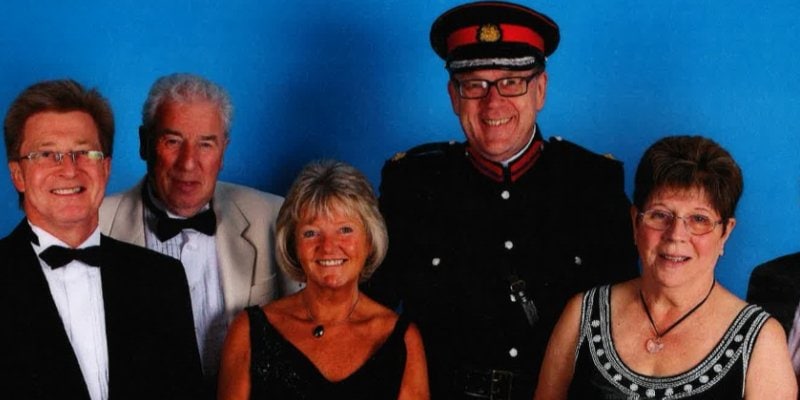 “My first contact with St Clare Hospice was in 1993. My husband George was diagnosed with a brain tumour at age 54 and was being helped by St Francis Hospice in Havering – the only Hospice with an inpatient unit in our area at the time. He was in and out of St Francis Hospice who cared for him on a regular basis for about 6 months. George would go into the hospice for respite care in order for me to recuperate.”

“It reached the point where George couldn’t get up the stairs at home anymore. That was when St Clare Hospice stepped in and loaned us a special bed and other invaluable equipment.”

“The support we had from both hospices was excellent. I felt at the time that I was fighting a losing battle, then the Calvary came riding in.”

“Suddenly help was there; hands-on, respite care. The emotional and mental strain was overpowering. To know that I had some time out over this period, gave me and my family the time to build up the emotional and physical strength to carry on caring for George.”

“The excellent care offered at the Hospice was second to none. On one occasion I visited George at the Hospice after he had been in a coma for several days, to find a young nurse sitting at his bedside holding his hand. I knew he was in the right place. It left a lasting impression on me as to what hospice care was all about.”

“George passed away at St Francis in 1993. I went to a bereavement group at St Clare Hospice afterwards – and met other people who were in a similar situation. More than 24 years later, I am still friends with some of the people that I met at that group.”

“One of the things that I found most difficult after George had passed on, was what to do with myself.”

“I had stopped working to care for George and we wound up our business. I’d been working full time for years – and suddenly I didn’t know what I was supposed to do with my life, at that point. It was tough.”

“I was invited to my first fundraising meeting at St Clare Hospice in late 1993, after I had donated an auction prize and was invited to the meeting as a guest. The fundraising group needed to raise £1.75 million to build an Inpatient Unit at the Hospice and that was the main item under discussion.”

“The St Clare Harlow and Epping fundraising groups were doing their bit to support the fundraising effort, but there was no mention of fundraising in the Buckhurst Hill, Chigwell, Loughton or Theydon Bois areas – my stomping ground.”

“When I asked why there was no fundraising group in those areas, they said it was because there was no one to lead it. I stepped forward and we formed the Loughton Friends group in 1994. Although the Friends group folded after 20 years due to the lack of a leader, the support is still there today – and we are still raising over £2,000 a year with our Quiz Nights.”

“I can honestly say I don’t know where I would be today without the friends I’ve made through volunteering with St Clare.”

“I can only describe it like an electric car which needs to be charged up to make it go. Loughton Friends gives me that extra energy and support – so it is vital to me.”

“We fought for and got our St Clare charity shop in Debden which is manned mostly by volunteers. Having volunteered in the shop myself for a number of years, it’s a great way to interact with local people and make friends.”

“The Loughton Friends group tried everything we could to raise money and awareness for St Clare. From Opera Live to a Beetle Drive, to a Cockney Night with pie and mash and Pearly Kings! We held an Irish Night with a troupe of Irish dancers. The biggest event by far was our Charity Ball at the police club in Chigwell – which raised over £12,000.”

“Volunteering has given me the opportunity to make friends that are still with me today. For me, volunteering for St Clare has been my life for the past two decades, and I have loved every minute of it.”

“Volunteering has given me back far more than I could ever have imagined. I call it the three F’s – Friendship, Fun and Fundraising!”

“When the discussions were underway for the new Inpatient Unit, the Friends Groups were invited to join in. Having seen hospice care first hand, we could use our experience to aid the decisions. I personally supported the team who decided the layout of the unit, and the package of care we could provide – and it’s like a 5 Star hotel!”

“Even my grandson, Jack, got involved with fundraising for the new hospice building. Instead of presents for his 7th birthday, Jack asked his friends to donate to the buy-a-brick campaign. The local newspaper wrote an article. I am very proud of him.”

“When the inpatient unit first opened all the fundraising volunteers were elated. I think everybody felt that we’d reached a milestone.”

“Having been diagnosed with cancer four years ago I’m now being supported by St Clare and Addenbrooke’s hospital. Between them, my care couldn’t be in better hands.”

“My youngest daughter Suzanne suggested that I get in touch with St Clare, and I think it’s brilliant that they now help me. I want to be able to carry on the way I’ve always been, and St Clare helps me to do that.”

“The friends I have made over the past 24 years are amongst my best friends. I have enjoyed all my years helping St Clare.”

“The total amount raised by the Loughton group over the years is around £180,000 and still growing – thanks to the hundreds of supporters I have had the honour and pleasure to meet.”

“I think that as long as you make the most of today you don’t need to worry about tomorrow. Celebrate each day.”