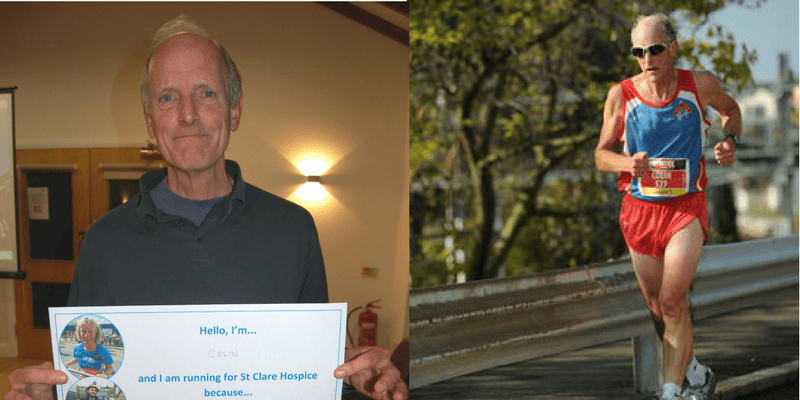 A long-standing member of the Harlow Running Club has chosen to join Team St Clare as he competes in his 23rd London Marathon on Sunday 23 April 2017.

Colin Moody (66 years, from Harlow) was awarded a place in this year’s London Marathon after qualifying ‘Good for Age’ based on his 2016 marathon time. Colin completed the London Marathon in 3hrs 35mins in 2016, finishing 17th in the men’s 65-69 years age category.

The Harlow resident has run a total of 61 marathons since 1984, including running the London Marathon 22 times. Having bagged a place in this year’s London Marathon, Colin chose to run in aid of St Clare Hospice having seen the difference the charity has made to his local community over the past 25 years.

Colin Moody said: “I have been a keen marathon runner for many years and joined Harlow Running Club in 1989 when it was first formed. Running has been a passion of mine for many years. My first ever marathon was in 1984 when I ran the Harlow Marathon – which unfortunately doesn’t take place anymore. It was actually meant to be my first, and only, marathon – but I ended up getting hooked on running. I have always been very competitive, competing with myself for a new personal best. Now a days I just aim to get a new personal best in my age category!”

Commenting on his decision to run for St Clare Hospice, Colin said: “Being a Harlow resident since 1973, I have known about the work of St Clare for many years. My family and I have, fortunately, never had to directly have the care of the hospice, but I know many friends and local people who have received fantastic care from St Clare, through really tough times. When I saw the Hospice fundraisers were asking for people who received London Marathon ballot places to take part for Team St Clare, I immediately got in touch. It is fantastic to make the most of having a place in the world’s most famous marathon – and to run for a very worthy cause.”

Colin has also been a dedicated St Clare volunteer for a number of years, assisting at the Hospice’s annual 10k road race in April.

Colin said: “I have volunteered for more than 10 years at St Clare’s 10k race, which is held every year in April, and my job is to help to time the runners as they cross the finish line. A big team of Harlow Running Club members support the event every year – both as participants and as course volunteers. I enjoy volunteering as an official timekeeper and seeing the looks of relief, achievement and determination as people cross the finish line! The St Clare 10k is a great event and has raised tens of thousands of pounds for the hospice over the years. I will be volunteering again this year on 9th April and it will certainly get me in the mood to take on the London Marathon 2 weeks later!”

You can sponsor Colin on his online fundraising page at: http://uk.virginmoneygiving.com/ColinMoody