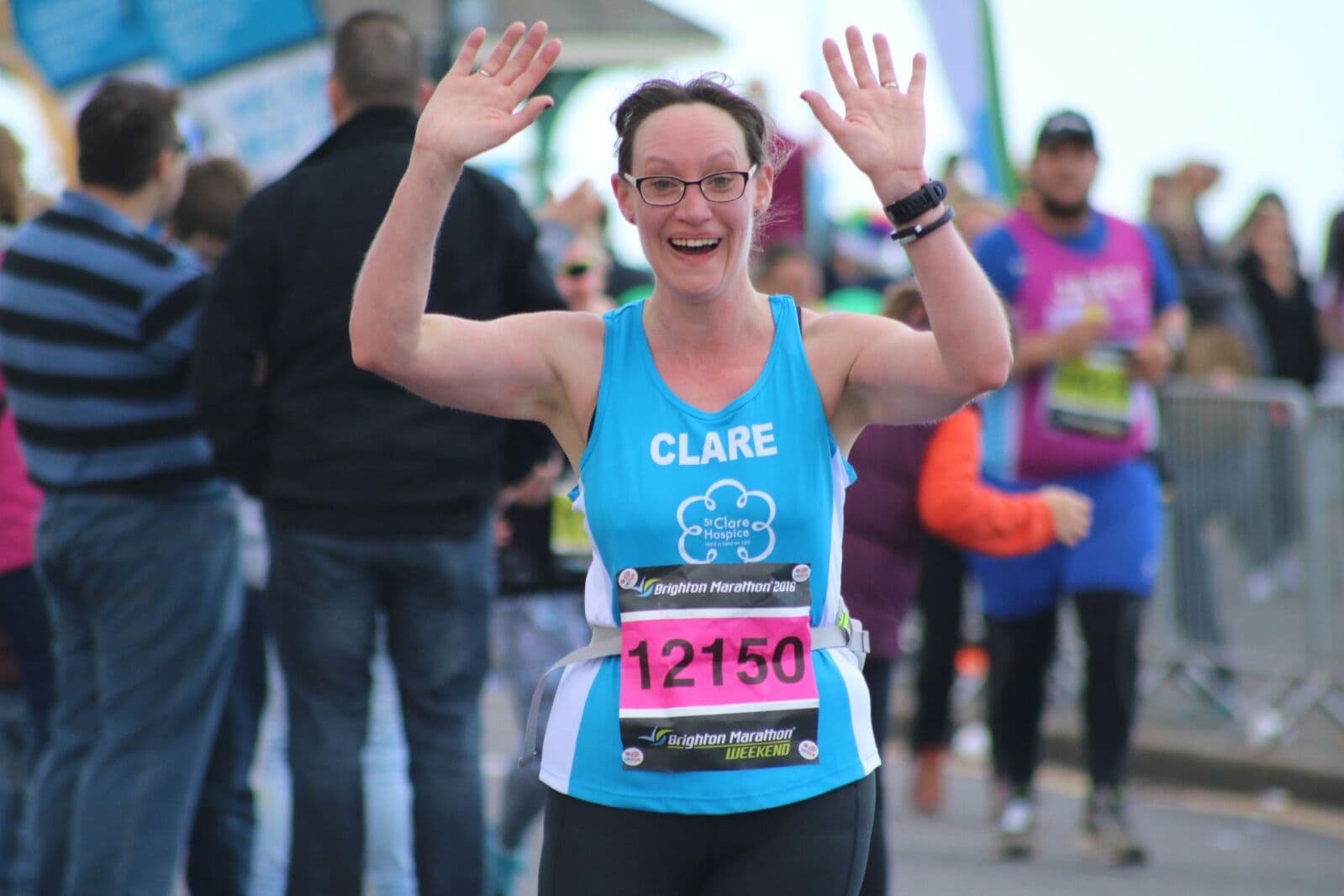 Throughout 2017 Clare Gallagher, a dedicated St Clare supporter from Stevenage, will be lacing up her trainers and setting off on a “marathon” 12 races in 12 months running challenge in aid of the Hospice. The mother of three is undertaking the year-long running challenge, taking part in a race each month for the whole of 2017, after her grandmother received care from us in 2015.

Clare (age 38 years, originally from Great Dunmow) took up running in 2015 as a way to maintain a healthy lifestyle. Her grandmother, Lily Este from Great Hallingbury, was admitted to St Clare Hospice for care on our inpatient unit in March 2015 and passed away on 11th April 2015 – the same day as Clare ran her first major race. Clare’s love of running, and her love of her Nan and St Clare Hospice, has been connected ever since.

Reflecting on the care her Nan received at the hospice, Clare said: “I first came into contact with St Clare in March 2015 when my Nan was referred from Princess Alexandra Hospital. I had never been to St Clare before and I didn’t know what to expect. But once you walk through those doors, and see how lovely it is, you just breathe a big sigh of relief. The nursing staff were like angels – they were just lovely. St Clare’s is just amazing.”

Clare continued: “I was actually in Brighton, about to take part in my first 10k race, when I got the call from my Mum to say my Nan had passed away. It was so hard because all I wanted to do was get in my car and drive back to St Clare. But my Mum told me, ‘No, you must run it for your Nan’. So I ran that race for her. The next year, in 2016, the Brighton Marathon fell on the date of my Nan’s anniversary. So I signed up to run my first marathon for St Clare Hospice. It meant so much to me to be raising money for the hospice, and in remembrance of my Nan.”

After Clare Gallagher secured a ballot place in the Virgin Money London Marathon 2017 she was inspired to undertake a year-long fundraising and running challenge for St Clare Hospice. Clare said: “After running my first marathon in 2016 I said I would never run a marathon again! But then I was persuaded by a running friend to enter the London Marathon ballot for 2017.”

Clare continued: “I know the chances of getting a London Marathon ballot place are so slim that I thought it wouldn’t be a problem. But then I went and got a place! I knew I was so lucky to get a chance to run this world famous marathon and without a second thought I knew I would raise money for St Clare. Things snow-balled from there and I decided to run 12 races in 12 months for St Clare throughout 2017 – with the London Marathon as one of them.”

Mikaela Ball, Challenges and Events Fundraiser at St Clare, said: “Clare is undertaking a huge challenge for us this year – 12 races in 12 months is no mean feat! Her first race was on Sunday 15th January, the Benfleet 15, a fifteen mile cross-country race – and she flew around it even in the mud. Clare has got a mixture of 10k, half marathons and full marathons lined up for the whole of 2017, and we will be supporting her every step of the way. Clare is aiming to raise £2,500 in fundraising this year – and we will be helping her with top tips to reach her target. Clare is not only a marathon runner, she is a marathon fundraiser too – a true hospice heroine!”

If you would like to take part in a running challenge for St Clare Hospice, see how you could get involved: www.stclarehospice.org.uk/get-involved/challenges/