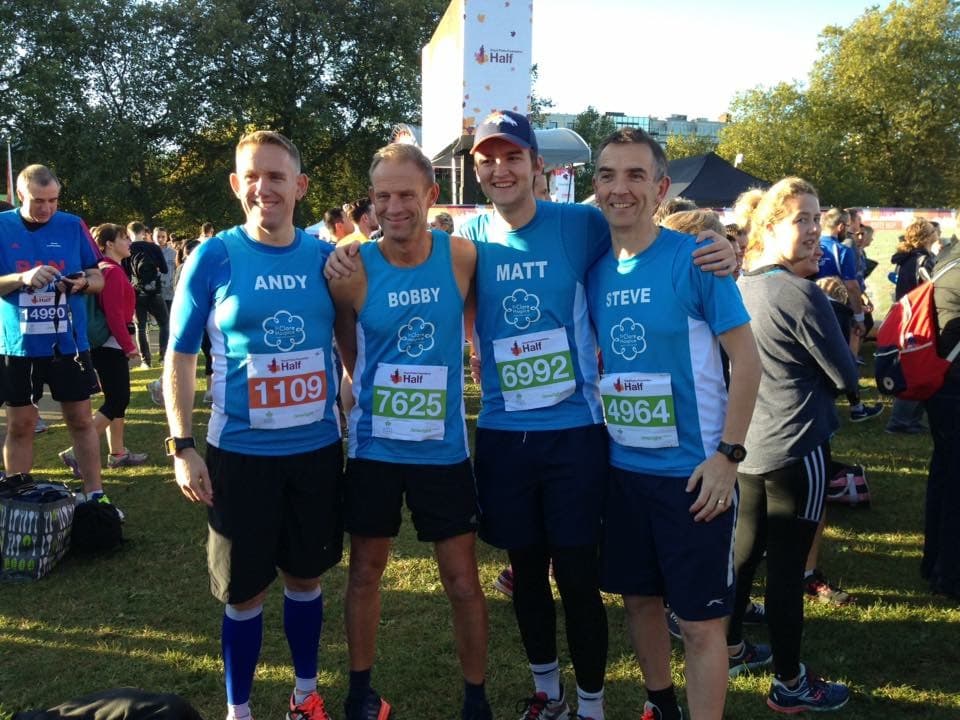 Team St Clare takes to the streets of the Capital!

A team of ten royal runners took part in the Royal Parks Trust Half Marathon on Sunday 9 October in aid of Clare. The running team has raised a combined total of over £3,600 so far – with sponsorship still coming in for Team St Clare.

The 13.1mile race, which started and finished in London’s Hyde Park, was attended by 16,000 runners from more than 40 different countries worldwide. St Clare was represented at the event by a team of ten local supporters.

Amongst the St Clare team members was seasoned marathon runner Andy Kitson (42 years from Harlow) who completed the race in an impressive 1 hour 39 minutes – finishing in 730th place. The race was Andy’s seventh event for the Hospice – having previously completed the London Marathon twice for the charity and most recently running the St Clare 10k event dressed in the charity’s Clare Bear mascot costume.

The team also included husband and wife duo Jeanette and Philip Butterfield (from Saffron Walden) who completed the race together in a time of 2 hours 17 minutes. Father and son team Steve and Matt Cowlin (from Harlow) also took part – Steve finishing in a time of 1 hour 53 minutes and his son Matt completing the course in 2 hours 22 minutes.

Perhaps the most incredible achievement of the day came when Sophie Ramm (aged 28 years from Bishop’s Stortford) completed her first half marathon less than a year since her husband Dave passed away at St Clare Hospice, aged just 35 years. Sophie took up running after the loss of her husband and has been motivated by a desire to give something back to the organisation that cared for him. Sophie completed the race in 2 hours 42 minutes and has so far raised around £2,000 for St Clare Hospice.

Jade Clarke, Challenges Fundraiser for St Clare Hospice, said: “We had a fantastic day supporting Team St Clare along the Royal Parks Half Marathon route. It really is a brilliant event – our runners described it as the best half of the London Marathon! The route took them past the world famous sites of Buckingham Palace, Trafalgar Square and Big Ben. There were hundreds of tourists lining the route which really helped to motivate the runners.”

Virgin Money London Marathon 2017 ballot places were released to the public at the start of October and Jade Clarke is encouraging people to contact the Hospice if they were lucky enough to secure a ballot place.

Jade Clarke said: “We are looking for as many runners as possible to join Team St Clare for next April’s London Marathon. We have five ‘Gold Bond’ charity places of our own, but we want to welcome as many runners as possible to fundraise for us if they secured their own place. If you were amongst the lucky 13% of applicants who secured a place through the ballot, why not make that ballot place count? Running for us with your own place requires no minimum fundraising target, and you will get all the expert support, advice and encouragement to make your London Marathon journey the best it can be!”

For more information about how you can take on a Running Challenge with Team St Clare, click here.