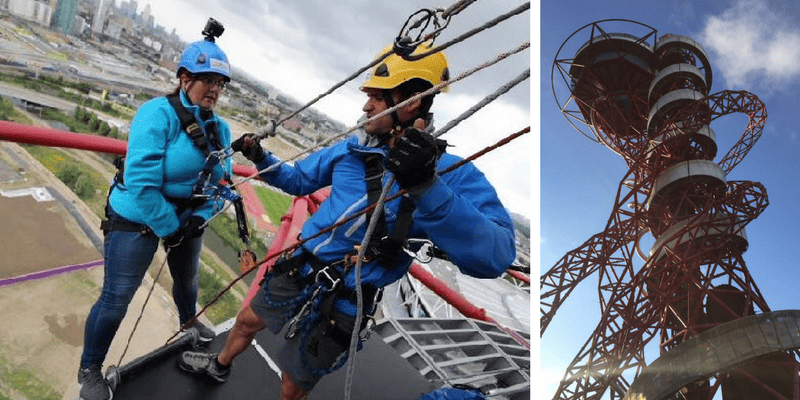 Six wonderful women have tackled the UK’s highest freefall abseil – in support of St Clare and in memory of beloved friend and partner, Helen. Three of the abseiling group are members of Harlow Rugby Club, and decided to take on the challenge in memory of their close friend Helen, who was also a member of the rugby club and supported the Harlow Rugby Women’s 1st XV.

Amongst the abseil challengers who signed up for the Orbit abseil was Alison Boggas, who also works as a Nursing Assistant on the Inpatient Unit at St Clare.

“I have worked at St Clare Hospice for 2 years now and can honestly say it is the most rewarding and uplifting job I have ever had. It is such a privilege to care for people at one of the most difficult times in their lives, and to know that you are making such a difference to their friends and family.”

“Last November was particularly tough for me, as one of my own close friends was admitted to St Clare. Helen and I have known each other through Harlow Rugby Club for over 3 years and were great friends. We were devastated to lose her at the age of just 49 years, but knowing that St Clare was able to give her such expert care, makes it that little bit easier.”

Commenting on their decision to tackle the Orbit abseil, Alison said:

“Helen actually saw the poster for the Orbit abseil when she was staying at St Clare. Helen gathered her partner and all her closest friends around her at St Clare, and challenged us all to do the abseil for her! I think it was a way for her to make sure we would all be together as a team, taking care of her partner Lyn, and also doing something amazing for St Clare. I will never forget that moment when we all promised Helen that we would do this incredible challenge for her.”

Alison took part in the 262 foot abseil off the UK’s tallest sculpture – the ArcelorMittal Orbit – on 25 June along with Lyn Bryant, Liz Glenister, Jen Caswell and Elena Crehan. One member of the team, Dani McKenna, was injured and unable to participate on the 25 June so has rescheduled her abseil for the 2 September.

Talking about the Orbit abseil experience, Alison said: “I am not afraid of heights, but I have never done an abseil like this before, and conquering such a huge challenge was a really fitting tribute to Helen. The abseil was an incredible experience! It really is such a huge structure – the first time we tried to abseil back in March, the event had to be cancelled because the winds were too strong. When it came to doing the abseil, on our second attempt in June, we were all so psyched up for it – having waited so long to do it!”

“The organisers, Wire and Sky, were really great and were so moved that we were all doing the challenge in memory of Helen. Lyn and I went down side by side, talking and checking out the views of London all the way down. It takes 8 minutes from top to bottom, and you really are ‘freefall’ abseiling, as you just dangle in the air – so you need to have a head for heights! It was such a great experience, that I have already signed up to do it again! I will be accompanying our friend Dani, who was injured on the day we did it, and we will be abseiling on 2 September instead. That will mean that all of us have completed the challenge Helen set us – and it feels so good to have been able to fulfil our promise to Helen.”

The group have already fundraised more than £2,500 for St Clare Hospice, with sponsorship for their abseil challenge still coming in.

If you are interested in taking on a similar challenge for St Clare Hospice, check out the challenges on offer here.