“St Clare has given me so much support and has helped me to face life - now that it is so different. I don’t know how I would have managed without St Clare. I would tell anybody who needs help to come here. It’s not a frightening place.” 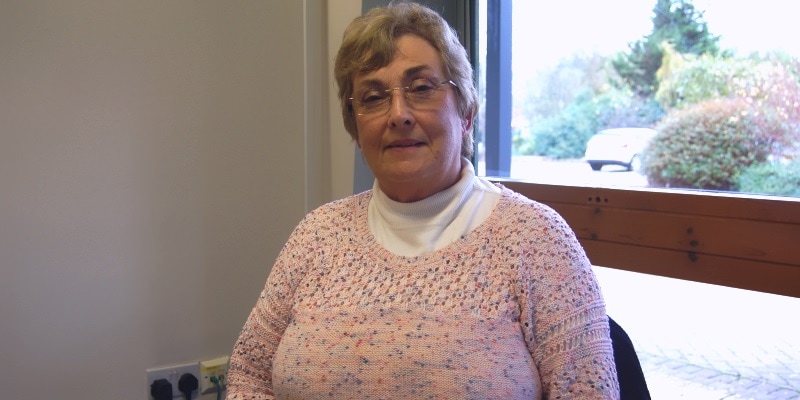 “When Bob and I first met I lived in Woodford, and he was an Eastender from Stratford. We were married shortly after first meeting and bought our first home together in Ilford where we lived for 13 years and started our family. In 1980 we moved to North Weald to a larger house for our growing family. He worked so hard as a Civil Engineer and was always up at the crack of dawn leaving for work in Hackney. Although that wouldn’t have been the case if it wasn’t for me dragging him out of bed each morning! 47 years of marriage later, I am still an early riser because I had become so used to it.”

“Bob was a very brave and proud man – he loved walking with his best friend, who is also called Bob. They sometimes notched up almost 20 miles in one day on their pedometer! They also enjoyed watching the planes take off at North Weald airfield. Bob and Bob had worked together since he was 20 years old and were best friends for over 50 years.”

“It was February 2013 when things changed for my Bob. He was out walking with his friend when he said, “it’s no good, I can’t do it. I’ve got to stop.” Bob was experiencing shortness of breath and so he went to see his doctor. Bob was later diagnosed with terminal Mesothelioma, a type of cancer caused by exposure to Asbestos, and given just 9 months to live. The most devastating thing was that we had just got him through the treatment for prostate cancer and just about got him sorted – then this happened to us.”

“Bob underwent a procedure to drain his lungs and then later had an operation at a hospital in London which we thought had practically fixed him – it worked like magic for a while. He was out walking again like normal after the operation – which almost made the idea that he was terminally ill seem unreal.”

“Bob was fine for quite some time, and it was during a checkup at the doctors when it was first recommended that we get in touch with St Clare. The doctor had said to Bob to come along to St Clare Day Therapy sessions and then shortly after we were referred. We weren’t scared of the thought of coming to a hospice as we knew that keeping away wasn’t going to make any difference. It would simply mean, not facing up to the situation. Any help and support that we could get was appreciated and St Clare made you realise that you weren’t alone.”

“The best part of Day Therapy was definitely the reflexology with Jackie. It helped to relax him. There wasn’t much we could do to help Bob’s symptoms, so the relaxation was very important.”

“Towards the end we had nurses from the St Clare Hospice at Home team coming round to visit us every day, helping Bob to stay at home like he wished. The St Clare nurses did whatever Bob needed. They really were wonderful. They would always turn up when they said they were going to which meant a lot to me. It meant that I could still plan things and still have a little control over my day.”

“Our son had already set the date for his wedding but unfortunately he had accepted the fact that his dad wouldn’t be well enough to attend, but he still really wanted me to be there. I was worried about leaving Bob alone so the nurses took control and had planned to take care of Bob for the whole day just so that I could attend the wedding. Unfortunately Bob died four days before the wedding, so they didn’t need to, but the fact that they had everything in place for us to make sure I could go to the wedding meant a lot to us.”

“Bob died at home on 23 August 2015 – 2 and a half years after they told us he had 9 months to live. We had a St Clare overnight nursing assistant with us that night who helped to make it very peaceful. I’m so grateful to St Clare for all the help they gave Bob during his illness, and for me once he passed. I attended the bereavement counseling for a while after, but I think I’ve come to grips with it all now.”

“The problem is when you are dealing with someone who is gradually getting worse, their world narrows and becomes all about the illness – but so did mine. Apart from going out food shopping and coming to St Clare for the carers’ group, I didn’t have much time. I attended every one of Bob’s appointments and procedures with him. Then suddenly it’s all over and you go from having no time at all, to suddenly having all the time in world. I can’t say I’m over it, I miss him – he was my companion and he could always fix everything for me.”

“Bob was a real fixer. I had never changed a light bulb in my life and since he has died you should see the number of bulbs that have gone in the house! You’re suddenly faced with, ‘how do I do this?’ It’s a shock to the system, a completely different way of life. For a long time you know you have to continue in this new way of life – that you didn’t actually want, or ask for. You don’t want to go down this road but you get no option.”

“Throughout the whole of Bob’s illness, he never once complained. The only thing he would say is that he would never get to see our grandchildren grow up, he found that really hard to cope with. But you have to remember the times when he was okay and the good memories and try to forget the bad.”

“St Clare has given me so much support and has helped me to face life now that it is so different. I don’t know how I would have managed without St Clare. I would tell anybody who needs help to come here. It’s not a frightening place. I’ve always thought what a peaceful place St Clare is.”