“I really needed a break, and I loved the instant feeling of welcome you got at Café Clare. I really had got to the stage where I just didn’t know if I could go on anymore. Any problem I came across, someone at the Hospice said ‘leave it with me’ and they solved it.” 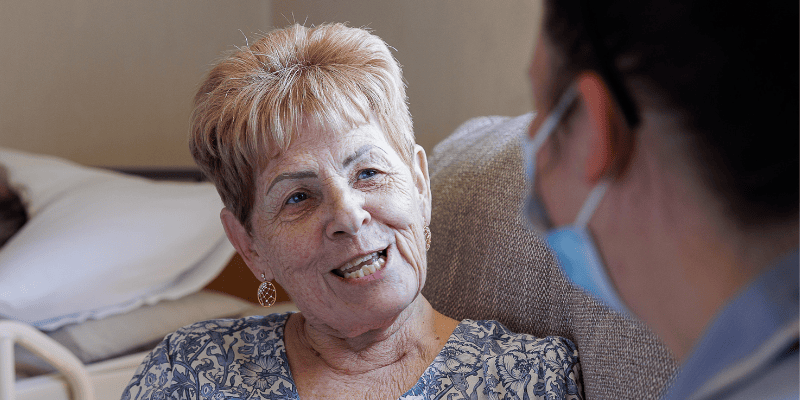 When Doreen’s daughter in law suggested she went along to Café Clare on a Friday morning, it started a chain of events that has led to Ian, Doreen’s husband, receiving the ‘amazing care’ of the Hospice at Home team.

“Ian has been ill since 2016”, explained Doreen. “He was initially diagnosed with one brain tumour but since then, things have got worse and he how has 4 masses in his brain. When my daughter in law suggested I went to Café Clare, Ian was well enough to be left by himself, although I had been caring for him for long time.”

“I really needed a break and I loved the instant feeling of welcome you got at the Café. I didn’t know anyone when I walked in but people came up and introduced themselves, and I soon was chatting away.”

“While I was there I told them about Ian, about how we didn’t have any care in place to give me any kind of a rest. I really had got to the stage where I just didn’t know if I could go on anymore. The staff at St Clare immediately started to sort things out for me. I got a phone call and things started to get sorted out.”

“Any problem I came across, someone at the Hospice said ‘leave it with me’ and they solved it.”

“My first visit to Café Clare turned out to me my last one. In May this year, Ian had a fall and now he is unable to be out of bed. The hospice have stepped in and we got visits from the Hospice at Home team to help with Ian’s personal care. He really wanted me to be the only one caring for him, but I physically couldn’t move him to be able to care for him in that way.”

“The girls from Hospice at Home were wonderful and Ian really enjoyed their visits. They spoke softly to him when they needed to, but also had a laugh and a joke with him.”

“Dorothy, the nurse from the Hospice at Home team was great. She strongly advised that I shouldn’t be getting Ian out of bed. He’d had a fall when I was trying to get him up to for the toilet and I couldn’t get him back into bed. An ambulance was going to be 15 hours and in the end, out of desperation my son-in law was able to send some of his work mates round to help. Two men turned up, one really young. He said, ‘don’t worry, I’m used to doing this kind of thing for my grandad’, they were so kind.”

“Now we have a care package in place, the Hospice at Home team have stepped back for a bit. I do miss them, they had become like friends. I know that as things get more difficult, I can call them back, and I know they are on the end of the phone for me, if I need them.”