“Without the counselling I have had at St Clare, I don’t think I would have been able to accept my grief. Accepting the grief is a massive part of me talking about it.” 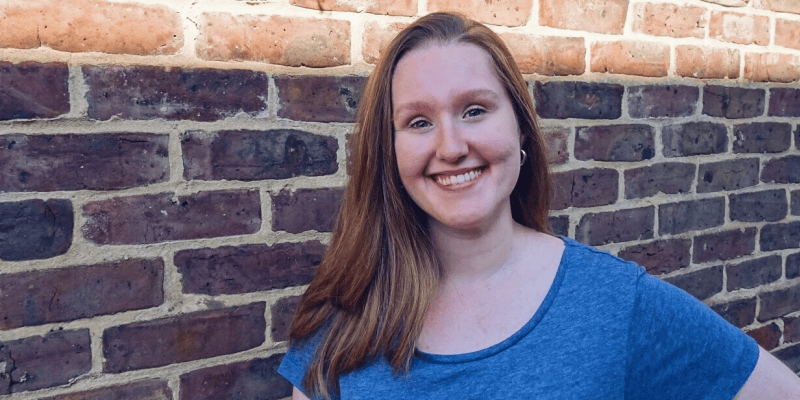 “Mum was diagnosed with cancer in 2013 when I was 13, and then re-diagnosed in April 2017 when I was in college. You really don’t think it is going to happen, until it happens. I was studying full time and Mum was absolutely brilliant.”

“I know everyone says that about their loved ones, but Mum was incredible. She had end of life cancer and was still working around the house. Even when Mum was having chemo she would drive herself to her appointments, despite what she was going through.”

“Cancer did not have control of her – Mum stayed in control. The way she kept going was just incredible. I was and still am really proud of her.”

“I finished my first year of college in June and from then, I was at home full time with Mum. I just wanted to spend as much time with her, as we knew her cancer was terminal.  I don’t think it really hit me when I was still at college.”

“I knew about St Clare’s because my Mum was a local District Nurse and so she had patients who went to the Hospice – then, sadly, Mum ended up being a patient there herself.”

“Mum was having a problem getting her pain medication regulated, and she was in a lot of pain, so she decided to take the option to come to St Clare’s.  The nurses at St Clare could regulate pain more effectively than we could at home.  It was important to get the medication balanced to ease her pain.”

“It was August 2017 when Mum came to St Clare’s inpatient unit for pain management. It was daunting coming into St Clare’s to start with as Mum had had patients there, and now she was there as a patient herself. It was a big role reversal. At the same time, I trusted my Mum, and I just thought – if this is what she wants, then I am here for her –  and I followed what she wanted. I was looking forward to her being in less pain, and to it being easier for her.”

“St Clare’s is in a beautiful area – the setting is so peaceful and serene. I think that is really important for people when they are at the end of their lives – to be in a place that is calm and relaxing.”

“It made a big difference to be in St Clare’s with Mum. I could stay over and sleep in her room with her, and that was really important because I got to have that time with Mum. I was anxious about not being there when Mum died, so it was good that I didn’t have to leave. It was really lovely to be able to be there with her.”

“Before Mum passed away I found out about St Clare’s services for families and the fact that there are therapy and counselling services. I felt that I needed that support. I think I was proactive in the way that I felt I needed to talk to someone about my Mum.”

“I didn’t talk to anyone when she was diagnosed for the first time, and I had it in the back of my mind that I really needed to talk to someone. I just wanted to talk about life – not necessarily about my Mum having cancer. When I saw the opportunity that the Hospice offered, I thought – this is my time.”

“I met the therapist at St Clare for my first session the day before Mum died, in September 2017. It was perfect timing, if you can have perfect timings for these things.”

“I see having access to counselling and therapy as a privilege. I know there is a shortage of bereavement and mental health counselling services in general across the country, and that lots of people cannot access counselling. So I decided that if I have the opportunity to talk to someone, I should take it.”

“Having counselling at St Clare has been such a significant part of my grief journey. It has helped me so much.”

“I had read that St Clare offered art therapy for young people, and at first I wondered – as a 17-year-old – if I was the right age group for therapy with arts and crafts, or if it would be childish. But when I went for my first counselling session and I ended up drawing a box on a page – and from that we discussed what that box represented, and it was a route in to discussing how I was feeling and what I had gone through that week. Don’t judge a book by its cover, art therapy has definitely been instrumental in my understanding of grief.”

“I think there has been a big stigma around mental health, and so my message for other young people of my age, and younger, is that it is so important to talk to someone – especially if you have lost someone.”

“People can have delayed grief, and the best way for me was to talk about it straight away. Everyone is different, but that’s what worked for me. My Mum was and still is very close to my heart, she was my very best friend, and so it was very important that I had someone to talk to.”

“The biggest issue for me was the acceptance of Mum’s death. When my therapist would say ‘your Mum has died’ I didn’t like the fact that she would use the words ‘died’ or ‘dead’. Although I knew that Mum had died, there was still some denial that it had happened, and in my head she was still alive. I was in a confused state where I didn’t know what had happened, but at the same time, I did know.”

“I also spoke to the therapist about my experience with ‘grief attacks’. A grief attack is when you have a sudden memory relapse about someone in your life who has died. You may miss them or yearn for them. It happened to me once in the cinema, I was watching a film where the character received a letter from their loved one that had died. They tend to say – I’m really proud of you, things will be ok – and I just ended up crying in the cinema because I never got that final letter from Mum. My friends just thought it was because of the film, but it was because I didn’t get that sense of conclusion.”

“Without the counselling I have had at St Clare, I don’t think I would have been able to accept my grief. Accepting my grief is a massive part of me being able to live with it.”

“With the help I have had from St Clare’s, and my therapist Catherine, I have been able to talk about my Mum, and death, more openly. I would go into a session and tell my therapist I’d had a tough week and she would discuss it with me.  Being able to understand the underlying emotions related to grief was really helpful. Sometimes when you are grieving you think you’re going crazy and you can be really hard on yourself.”

“Having had the support from St Clare’s therapy services, I am now confident to talk about death and have been keen to help other young people out there too.”

“Young people need to talk together. I think there needs to be a change in the way people approach the subject of death.”

“That is why, for my final college project, I recorded a podcast with two of my friends from my media course. We discussed the subjects of death, grief and bereavement, because we wanted to record something personal, and we also wanted to address the stigma around death in our society. Two of us have lost a parent, and the other friend’s mother is a cancer survivor. We talked about what ‘bereavement’ is – because a lot of young people are unfamiliar with that word – and we discussed our personal experiences, and what you can expect when you are grieving.”

“We discussed the language people use around death – and how we use phrases like ‘passed away’ in social situations. We said how with younger kids it can cause confusion when people use certain euphemisms like ‘Mummy has gone away with the angels’ or ‘Dad has just fallen into a deep sleep’. All of these things can add to the taboo of death – which just makes it harder if you are a child or a teenager going through bereavement.”

“The more you skip around the subject of death, the more taboo there is going to be. It’s so important to talk about death.”

“When I did the podcast I felt like a weight was lifted off my shoulders. I was happy that I had talked about my own experience with other people – other than my therapist and my Dad. It was so liberating to have that conversation with my friends, because I hadn’t talked to them about it before. We all felt that death should be talked about more openly. It’s good to sit and talk about something that society commonly avoids. That is how you affect change.

“I hope that I can make even just a tiny change, and that even if one person listens to my podcast and it has some form of positive impact, that way it’ll be worth it.”

Access St Clare’s resources on ‘How to talk about death and dying’ here.