“We couldn’t have got through it all without St Clare, especially during Lockdown – they were our real life line. They were always there when we needed them.” 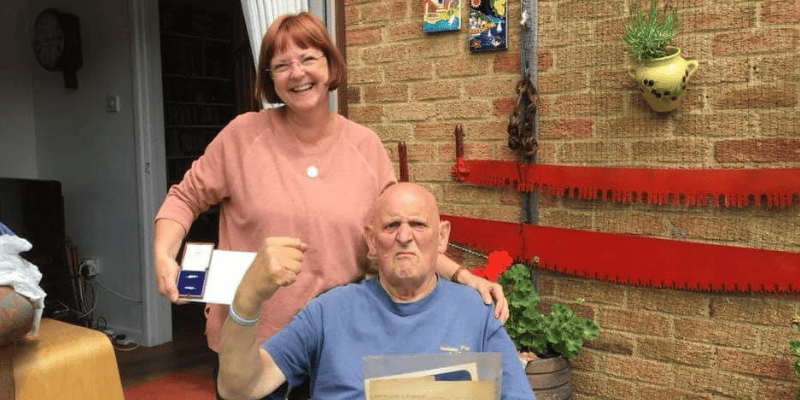 My dad, David, was one of a kind! He had such a unique, special personality, he was kind, irreverent and his mind was constantly whirring. He was an ex-Science teacher from Harlow and was always coming up with new inventions or modifying things in his garage, the ‘cave of wonders’. Everyone who knew him said he could tell an amazing story and was a real showman.

It was a huge shock when dad was diagnosed with a very rare, 1 in a million, jelly -like cancer (Pseudomyxoma peritonei) back in 2011. It started in his appendix and he was under the treatment of a world renowned centre for that particular cancer in Basingstoke and then later he was cared for through the Williams Unit at Princess Alexandra Hospital.

Dad was always so brave, having every treatment and operation they offered over the years – he would always say ‘bring it on’!

He had countless operations and lots of rounds of chemotherapy. The chemo would make him very unwell -sending his fingers numb and even freezing his windpipe if he opened the fridge, but he would never give up.

I always went with my mum and dad to his consultant appointments, but there was one, routine appointment in October 2019 that I couldn’t go with them to. That was the one that turned out to be the appointment where they said ‘there’s nothing more we can do’. The chemo was making him so ill and now was having no effect. Dad, with his indomitable spirit wanted to carry on, but more chemotherapy would actually shorten his life.

It was hard to accept that there was nothing more they could do. But from then on for a number of months, dad actually improved because the chemotherapy had stopped. But the cancer was still in his lungs, liver and bones.

It wasn’t until the summer of 2020 that dad began to go quickly downhill. He had a pain in his arm, which he thought was a pulled muscle, but it was actually the cancer in his bones. That’s when we got in touch with St Clare Hospice.

A Clinical Nurse Specialist from St Clare’s, Annette, came out to visit dad at home in the garden, socially distancing. My dad was terrified of catching COVID as he knew if he got it, he’d never survive, but we sat outside in the garden with face masks on, and that put dad at ease. Dad was typical Dad, regaling Annette with his stories telling her his cancer was ‘one in a million’.

Annette was amazing, she was so knowledgeable, and not only was there for Dad, but really took the time to check my Mum was coping too. As I say, Dad was a big personality and loved to tell a story. Annette really listened and took the time to get to know him. I think she had a soft spot for him!

That summer dad went downhill quite quickly – always fighting – but he just got thinner, and the pain just kept getting worse. Annette reviewed his medications and increased his pain relief, but it seemed like we were always chasing the pain.

Annette led us along the path on dad’s journey with compassion, always being honest and kind.

In July 2020 things reached a crisis point and dad was in terrible pain and being sick. We phoned St Clare and Annette came round, and she could see that a stay on the Hospice’s Inpatient Unit would really help to manage dad’s symptoms.

Dad was admitted to the Inpatient Unit and managed to get his pain under control.

It was during the lockdown and so visitors were restricted and you couldn’t use the communal areas, so dad found it very quiet and once he felt better he really wanted to go home. He was on the unit for ten days in total and he said the nurses and food were great, but he wanted to be in his own home.

St Clare were happy to help get dad home – they really believe in caring for people where they choose to be. We were supported the whole time by the community team, with specialist doctor’s visits when needed, and mum could always call the 24 hour advice line which she found a lifeline.

In the last few weeks of dad’s life we had the support of the Hospice at Home team to provide help with personal care, but again, Dad was so frightened of COVID-19 they only came for a short time, and Mum took on most of Dad’s care now. Around that time Annette offered us a night-sitter, Pauline, who stayed with dad during the night so Mum could get some rest. By now Dad was having trouble sleeping, and having terrible dreams, so it was a real support having Pauline there. She was incredible. Dad talked to her all night long – showing her the things he wanted to buy on eBay and telling her about his family, me, my daughters, and my brother, who lived in America. She was so kind.

Throughout the summer, we had been told it wouldn’t be long before Dad died, but he just kept fighting. However, by November it reached the stage where dad was getting weaker and sleeping more. His pain had increased, and the District Nurses put a syringe driver in to manage it.

On the final day dad was alive we decided to have an early Christmas dinner together. We thought Dad could join us, but he had the syringe driver by now and was asleep on the hospital bed in the living room.  We all took it in turns to sit with him and talk quietly to him. Although he never regained consciousness, I’m sure he knew we were there.

Just after I had got home that evening Mum rang to say that Dad had died. It was like he was waiting until we left.

I drove straight back to be with mum, and then Pauline from the Hospice at Home team arrived. Pauline was absolutely amazing, she sat with us and helped us say our goodbyes to dad. She talked us through what we needed to do next – calling the doctor and the undertaker. Pauline asked if we wanted to help get dad ready and so me and mum helped her wash dad and put him in a nice shirt. It felt such a privilege to be able to do that as he had been there for me my entire life and now I could do something for him.

My dad died on 14 November 2020, at the age of 84 years. It’s just such a massive loss, and he was so brave right to the very end. Dad taught me everything. His love of literature, classical music, the ballet, fishing, the natural world. He passed that all on to me. He didn’t teach me how to live without him though, and I feel broken.

We couldn’t have done it all without St Clare, especially during Lockdown when they were just our real life line.