“It was massive having St Clare there for us. Lisa loved it as well. Everything about St Clare Hospice is amazing. The support; having somebody to talk to. They were there for me as well as Lisa.” 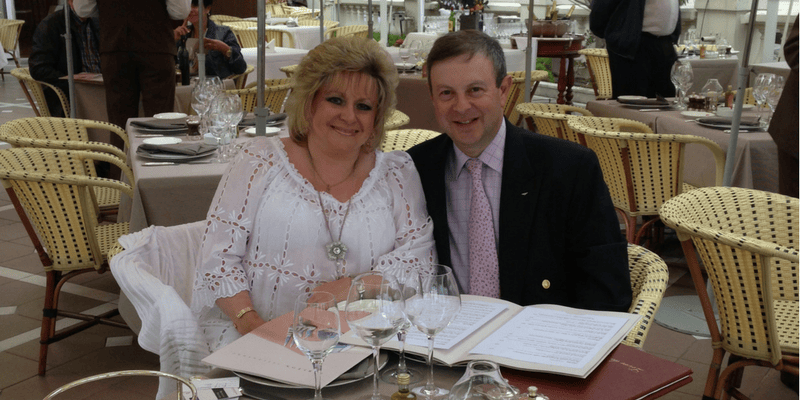 “I met Lisa for the first time on my birthday, when I was out with friends in London. I had moved up from Bournemouth because I just had this feeling that I should move to London to find the person I was going to marry. I just knew I had to be in London! Lisa and I didn’t see each other again until a few months later. A friend of mine said to me ‘I’ve met your wife’ and I didn’t know what she was talking about! She said ‘It’s Lisa Adler.’”

“I think that sometimes things happen for a reason, and I am a firm believer in fate.”

“A few months later I was out on a business dinner when sure enough, by chance, Lisa was there with a friend. We talked, and that’s when I asked her out for the first time. And that was the start of it!”

“Lisa was a business woman, working in IT recruitment, and I owned my own business in London. We had only been dating for a week or two when I had to travel abroad to Asia. Whilst I was travelling I was speaking to Lisa by fax! Lisa would send me a fax every morning, and we built our lives from there, always writing to each other.”

“Lisa and I were engaged within four weeks of dating. I knew the very first time that I took her out that I was going to marry her. We were married on 9th May 1993 in the West End in London.”

“When we came back from our honeymoon Lisa carried on with her career, I carried on with my business and everything was going well. On the 18th of January 1996 Lisa gave birth to our son, Marc. We always thought that we were having a daughter and we had girls’ names in mind but we didn’t have boys’ names, so when we were in the hospital I named Marc.”

“It was shortly after giving birth to Marc that Lisa noticed a lump on one of her breasts.”

“Lisa went to her GP to get it checked and they said that it was just a milk gland. In those days breast cancer wasn’t as prominent as it is now. If you have anything like that now I don’t think a GP would say that it is was just milk gland, they would tell you to go and get it checked.”

“Lisa’s mum and I wanted to have the lump checked so we booked her into a surgeon in Harley Street. We made an appointment and he saw us within about 24 hours. The surgeon said he wanted to do a biopsy, and he said he would do it the very next morning.”

“The biopsy was done and the results were available within an hour. Sure enough, just an hour went by, and we were told that Lisa had breast cancer.”

“That was when Lisa’s fight with cancer started. She was just 31 years old. We couldn’t believe it, we were just shell-shocked. Everything changed from then on.”

“We basically lived our life up on Harley Street – we were just backwards and forwards all the time. Lisa had an operation and then radiotherapy and chemotherapy. In the end we knew all the people on the street – it was sad, it was just a whole way of life for us.”

“Soon after Lisa was diagnosed with cancer she started to write. Lisa had this inner strength to write about her battle with cancer. She wanted to write a book to inspire others, so that no one would give up, and just let cancer win. Lisa knew other people going through cancer and she would tell them not to give up.”

“Lisa always said ‘Get up, get ready, get dressed. Stay strong and don’t give in. Just because you’ve got cancer, doesn’t mean it’s the end.’”

“Lisa was about to go into remission from the breast cancer when they found out that she had lung cancer. They said she was very lucky because if they had found it a couple of weeks later it would have been too late. Our son Marc was only a couple of years old by this time.”

“Lisa said that there was no way she was going anywhere. Lisa said ‘I’m not going to let this win – I want to see my son grow up.’ And she did.”

“Lisa believed that if you get yourself up and made the effort; that was half the battle. People didn’t even realise that Lisa had cancer because she always looked so well. She always looked incredible! I remember a doctor coming in to see her in intensive care and Lisa was all made up, the doctor said he had never seen anyone in intensive care look like that! That takes a strong person.”

“Lisa, Marc and I used to travel a lot – Lisa never missed out on anything. Often we would fly back from holiday on the day she was having chemo, and drive straight to the hospital! We would always maximise our time together. Before she came into St Clare Hospice I asked Lisa if there was anywhere she would like me to take her. She said ‘No, I’ve seen everything. I haven’t missed out on anything. I’ve had a good life.’ To me, that was amazing.”

“Lisa was always writing, and campaigning, the whole time she had cancer.”

“About 20 years ago Lisa had an article in the Mirror about her fight against cancer, and she raised thousands for the Helen Rollason cancer charity. Lisa was even interviewed on Sky television because she was campaigning for a particular new cancer treatment to be available for free. You can now have that treatment on the NHS, thanks to Lisa.”

“Lisa was very glitzy and glamorous, and she loved life. She loved anything sparkly! Lisa would always put her make up on, get dressed, and go out and do whatever she wanted to do.”

“Lisa was going through hell but she never let it cancer win. Lisa won. She was happy, never miserable, and I think that’s the reason she lived for so many years after first being diagnosed.”

“It was in October 2015 that Lisa was diagnosed with multiple brain tumours. She fell over in the street, and it was because the tumours had affected her balance. Lisa started on radiotherapy again, but it didn’t really work. We had to go to the hospital every day for five weeks. Lisa was admitted on the 1st December 2015 and I remember thinking that I didn’t know if she would even make it to Christmas.”

“Lisa did get a bit better, and she came home. We had a buzzer in the house so that I could hear when Lisa needed help. I was up and down four times a night, which I didn’t mind doing, but it was hard. I knew that if I was in the same position, Lisa would have done the same for me. I loved every bone in her body, everything about her.”

“It was in around February 2016 that we got in touch with St Clare Hospice. A nurse from St Clare came to see us at home and to make an assessment. We decided that we would like to have Hospice at Home care and the nursing assistants used to come four times a day, and a night sitter came overnight.”

“I remember this fantastic Hospice at Home nursing assistant, Kirsty, saying ‘Russell, you have your night’s sleep. Don’t worry about Lisa, I will take care of her.’ I tell you – it was the best night’s sleep I ever had. Kirsty was incredible.”

“It was massive having St Clare there for us. Lisa loved it as well. Everything about St Clare Hospice is amazing. The support; having somebody to talk to. They were there for me, as well as Lisa.”

“Lisa started to have falls at home and things were getting more difficult, so we decided that Lisa should come into the Hospice Inpatient Unit for a few nights. In the end Lisa was in the Hospice for about 3 weeks.”

“I didn’t know what to expect when I came into the Hospice for the first time. But as soon as I walked through the door I thought it was the most incredible place. It was nothing like I imagined it would be.”

“St Clare’s is beautiful – the grounds, the rooms and the garden. Lisa and I would sit out on the patio in the garden together, which was lovely. I think that what St Clare’s does is absolutely incredible.”

“My over-riding memory of St Clare would have to be, that you always had somebody there to talk to. I knew that if I had a problem with anything, I could ask. I didn’t feel like I was alone.”

“St Clare’s was one of the highlights of Lisa’s time in care. St Clare is like an extended member of your family. Everybody that works or volunteers at the Hospice, genuinely cares about what they do and you just love them from the minute you meet them.”

“If someone told me that they don’t ever want to go to a hospice, I would say that it’s nothing like what you expect. It’s an incredible place.”

“Lisa was discharged from St Clare and was admitted to a local private neuro centre. I used to drive up to see her every day. Our son Marc turned 21 years when Lisa was staying there, and she managed to say ‘Happy Birthday’ to him. Lisa was diagnosed with cancer when Marc was just two and a half months old, and she saw him through right to his 21st birthday. When Marc passed his university degree he was able to tell his mum. Lisa was just so proud of him. It was incredible that her strength and love of life meant she could keep her promise to see Marc grow up to be a young man.”

“In the end, Lisa had cancer eleven times. I don’t think I’ve ever met anybody who has survived it that many times. I truly believe that it was Lisa’s strength of character and positivity that led her to survive all those years. Lisa always stayed optimistic and strong, she wanted to be there for our son and me – she lived life to the full. Lisa died on 3 May 2017, she was 52 years old.”

“Lisa was the best thing that ever happened to me. She was amazing. I feel lucky to have met, married, and known her.”

“Now, less a year on, I have published Lisa’s book – as Lisa asked me to. She was writing about her fight with cancer right from the very start – to help and inspire other people with cancer. Lisa wanted her experience to benefit others and to inspire them to stay strong and live life to the full. I hope that her readers will find the book a beacon of hope and that her bravery and glamorous approach to her illness will serve as an inspirational tale to all of us who face obstacles in life.”

Lisa’s inspirational biography ‘Cancer and Bling’ is now being sold in the St Clare Hospice shops and can be ordered online here: https://projectypublishing.com/pre-order-cancer-and-bling/

Lisa’s book is being sold with all profits after publication costs being donated to three charities: St Clare Hospice, Helen Rollason Foundation and Isabel Hospice.