“St Clare was just so good at being there in the background, like a safety net if I ever needed them. I only had to pick up the phone and someone would be there for us.” 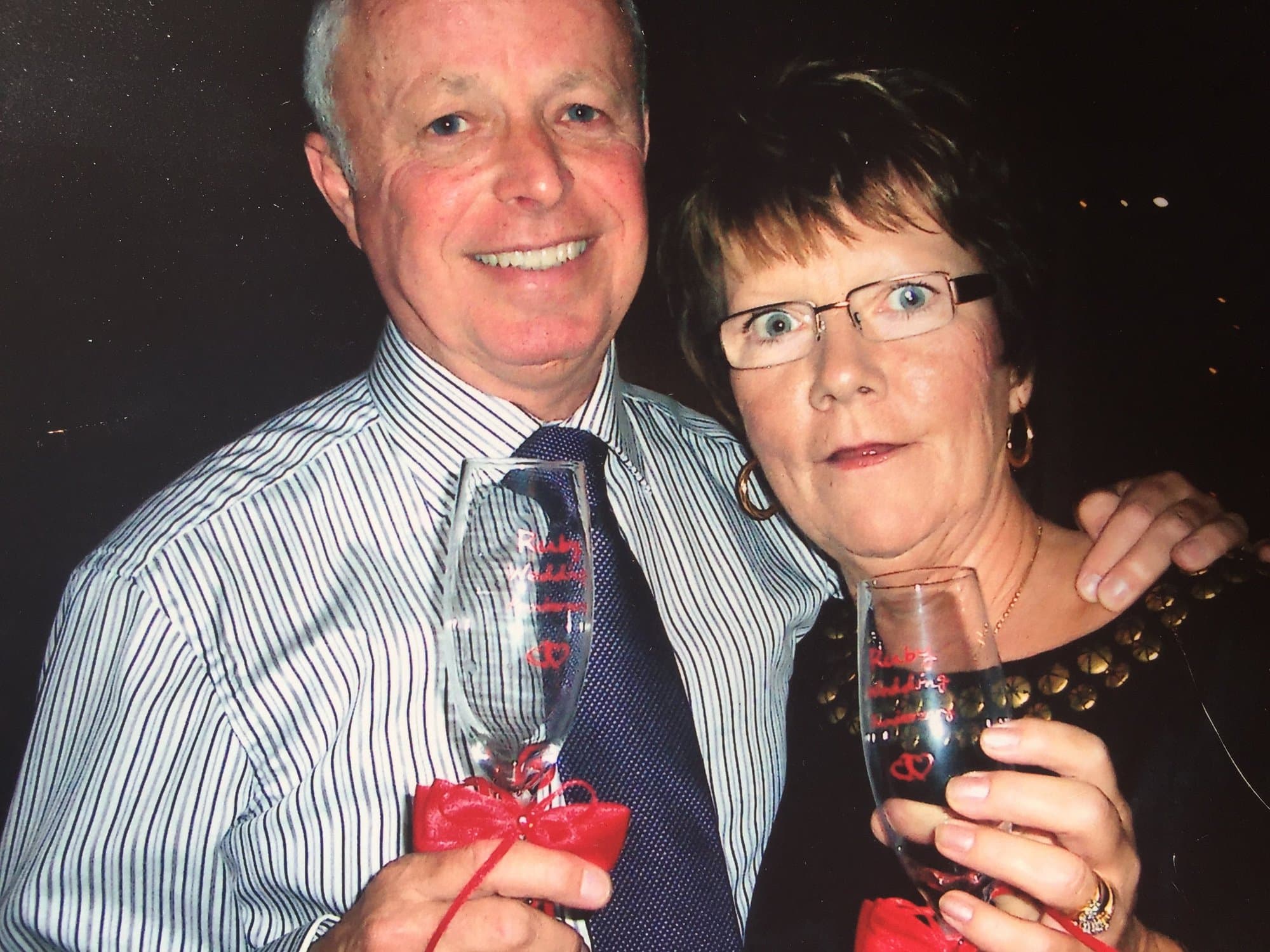 “I met Mike when I was 15 years old and he was 16. I used to live just behind St Mary’s at Latton – towards the old part of Harlow. Mike and I never had any money in those days, and we just used to walk down the road together, go to the fish and chip shop, and have a packet of chips between us as we sat on the bench outside the church. We always said that we would love to get married there one day.”

“In the end we didn’t have the money at the time for a big wedding, so we just had a small party after we were married at Epping Registry Office. It was 29th November 1969 – I was 19 and Mike was 20. It snowed on the day we got married – and I was in a little mini white dress!”

“As we never got to use the church at Latton we always said, when it is our 50th wedding anniversary we will try to arrange some sort of a blessing, in that church.”

“I know everybody says it, but Mike was one of the most kind, gentle men you could ever meet. Mick was a very intelligent man, as sharp as a button. He was a real family man, always wanting to be near his four brothers and his parents, and so close to our daughters – with our eldest, always a real Daddy’s girl.”

“Mike was an HGV driver and he had just retired, 3 days before we went on holiday to our house in Spain. It was May 2016 and we were three weeks into our holiday when Mike just collapsed. I managed to persuade Mike to go to the medical centre near our apartment and they diagnosed him within 2 hours – it was that quick. They took him in, gave him a CT scan, he came out… the doctor called me over and she said to us – ‘Mike has a massive brain tumour, there is nothing we can do for him.’”

“It was just such a shock when they said he had a brain tumour. Mike had shown no symptoms at all. Even when we went to the medical centre it was the last thing I expected.”

“Mike’s tumour was very aggressive. It was on the outside and the inside of the brain – and that was the problem. Mike was in hospital in Spain for 9 days and in the end they just told us to take him home to his family. We managed to fly Mike home and he was admitted to an intensive care unit in London. They did more tests but the biopsy showed the same – the tumour was non treatable. The hospital tried doing some radiotherapy and chemotherapy – which looked a little promising at first – but Mick was never really well enough and the tumour was just too big. In June 2016 the doctors gave Mike just four months to live. That was when we brought Mike home and my daughter called St Clare Hospice.”

“At that time, we hadn’t got the facilities at home to make Mike comfortable. I mean, you never really think about your house being disable-friendly until you need it to be.”

“The team from St Clare came round to do an assessment for us. Originally Mike was ok, he was mobile and could walk with frame, but in the end we needed a stair lift – we had put a bed in the lounge for Mike and I was sleeping on the sofa. And that’s where St Clare came in.”

“St Clare helped us to arrange to have a stair lift installed, to organise a hospital bed, and we even had a wet room put in for Mike – which St Clare kindly gave us £500 funding towards.”

“With St Clare’s support we still managed to get Mike out and about. He used to go out with his brothers once a week, they would take him out for a beer – or one time he wanted to go down to Southend and have fish chips and his brothers took him down there for the day.”

“It wasn’t just the practical things that St Clare helped us with – it was the emotional support they gave us too, that meant so much. It was in the autumn of 2016 when Michelle, a social worker at St Clare, came to visit Mike and I at home.”

“Michelle spoke to us and asked if we had any desires in life, and Mike told her about his wish for a wedding blessing on our 50th wedding anniversary.”

“This was just a week before our wedding anniversary – which is the 29th November. Michelle said she would speak to the chaplain and see what they could do.”

“I couldn’t believe it when I had a phone call from Marion, the chaplain at St Clare, the very next day. It was a Tuesday, and the following Tuesday was our 48th wedding anniversary. We told Marion the story of our courting and how we ate our packet of chips on the bench outside St Mary of Latton church.”

“When Marion phoned me back, and said that she had spoken to the vicar at St Mary’s, and that she was very happy to do the blessing, I just could not believe that Marion had done it so quickly. I mean – wow! It was all organised in under a week.”

“The whole wedding blessing service was just perfect. They even rang the bells for us when we came out!”

“The day of the Wedding Blessing was a beautiful day – blue skies and beautiful weather. Marion had helped us to write the wedding blessing order of service, and everything in it had a special relevance for us. We had the song ‘Songbird’ which was really special to us. Mike held my hand throughout the whole service. ”

“Our whole family came for the service and then we had a get together with our friends and family afterwards in the hall – with a buffet and chatting to everyone. Marion even helped to arrange a special wedding photographer to capture the day for us to look back at.”

“It might sound silly, but I needed to do the Wedding Blessing to prove to Mike how much I really loved him. I know that he didn’t doubt my love, but it just felt like the right thing to do. It was something that Mike always wanted to do. A little bit earlier than we had hoped for, our 48th and not our 50th anniversary, but we did it. And it wouldn’t have happened without St Clare.”

“Things got extremely difficult, but St Clare’s were always in the background. They were always there when I asked them.”

“As Mike’s illness progressed we needed more help from St Clare. At the end of 2016 we started to receive help from the Hospice at Home team – who were all really lovely people.”

“We had a fantastic night sitter from the Hospice at Home team, called Paul. He built up such a great rapport with Mike.”

“At first Mike was really against having personal care – even refusing help from myself. He is a very private man and didn’t want people helping him with things like washing. But Mike and Paul really hit it off. Paul was so great with him. If Mike woke up in the middle of the night, Paul would get up and make him a cup of tea, and they would stay up and chat together.”

“Also, having Hospice at Home help us with personal care, wasn’t just about helping Mike. It was a huge help for me too. I don’t know what I would have done without them.”

“Before Hospice at Home helped us, I couldn’t even leave Mike to go and have a shower. With Paul there, I got into this good routine. An hour before Paul was due to end his shift and leave, which was at 7am, I would get up and have my shower and get dressed. That way, by the time Paul left, I had got myself ready and could start my day – having actually had a shower. So, not only was he so helpful and great with Mike, he meant that I could look after myself properly as well.”

“Up until Christmas 2016 Mike wasn’t too bad – but then things steadily went downhill. I rang St Clare and asked if they could come to reassess Mike, and one of the nurses came. She said, really he needs to be in St Clare’s inpatient unit. Mike said that he wanted to go to St Clare and he was admitted to the unit.”

“The care at St Clare’s was first class. Everyone we met was a really lovely person – all very caring and very supportive. We used to spend all day at St Clare’s with Mike. He had a beautiful room, with a nice veranda – just everything about St Clare was special.”

“We were very focussed on Mike’s quality of life – and making special moments together.”

“Whilst we were in St Clare, one of Mike’s brothers turned 70. We had a little ‘do’ to celebrate for him in Mike’s bedroom – put banners up and everything. Mick was in St Clare’s over Easter and the chef came round and asked if we would all like a dinner together on Easter Sunday. So Mike, I and our eldest daughter all had a lovely roast dinner together in his room. It was lovely.”

“I just think, considering it is all done on donations, how St Clare do what they do, is amazing. I mean, even the meals – the chef comes into your room every day to ask what you would like, even if it isn’t on the menu! Everything about St Clare was superb.”

“The thing about St Clare’s is – they don’t just look at your medical or physical needs – they care for you as a person, and for your whole family.”

“Before Mike was unwell, I never really knew anything about St Clare. Like a lot of people, I assumed a hospice was a place you went to die. But it’s not. I didn’t realise they are actually there for you – from whenever you want them. There is so much to hospice care, and they do so much for people.”

“It all happened in such a whirl wind – from when Mike was diagnosed to when he died. But unfortunately life has a way of surprising you sometimes. You just never know when something like this will happen to you.”

“You never expect to need a hospice, and then suddenly you do. Things would have been so different for us without St Clare. I honestly don’t know what we would have done without them – we had more support from St Clare’s than anybody else.”

“It is still very raw, I have to be honest. When you have been with someone for all those years – 52 years in total – you find you miss them every moment. There isn’t a day goes by that I don’t think about Mike.”

“But, considering we were told Mike had four months to live, and we actually had more or less a year, we did very well. That is thanks to the care Mike was getting, and the support we got from St Clare from day one. I don’t think I could have got through without St Clare.”