20 cricketers raise thousands for St Clare in memory of Malcolm 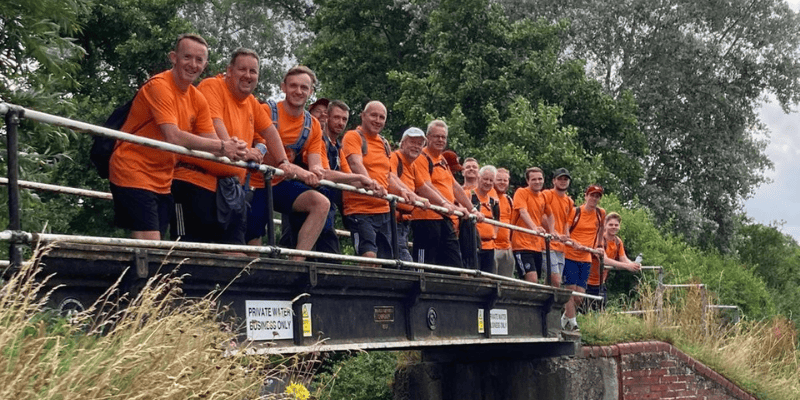 Howzat for a walk!

A 20-strong team of intrepid cricketers have completed a 48-mile walk in memory of fellow cricket-lover Malcolm Brown. They have raised nearly £15,000 to be shared equally between St Clare Hospice and towards a memorial for Malcolm at Takeley Cricket Club.

Liam Brown, 29, from Dunmow, was one of the organisers of the walk in memory of his father, Malcolm, who was cared for by our Hospice at Home team before his death in August 2018.

Liam and his brother, Tom, have been keen cricketers since their youth and their father had always been there, often on the sidelines scoring, whilst they captained Takeley Cricket Club’s first team.

Liam said, “We wanted to raise funds for a memorial score box at Takeley Cricket Club, as my Dad was the club’s secretary and dedicated scorer, but we also thought it would be a good opportunity to raise funds for a local charity at the same time. We wanted to choose a charity that had a connection with Dad and St Clare Hospice seemed like a natural choice.”

Liam explained how the care that his Dad received had helped the whole family in the last weeks and days of Malcolm’s life: “Dad was helped by St Clare’s Hospice at Home team during the last few weeks of his life. But it was in his last few days that the Hospice at Home team really helped us, by explaining what was happening and keeping Dad comfortable at home. I’m so very grateful for that.”

Liam and his fellow cricketers had originally aimed to raise around £4,000 through their walk. “I thought we were being ambitious by setting the target so high,” commented Liam. “But we reached over £10,000 really quickly and the figure has just been rising since then – it’s been brilliant!”

Liam and his fellow walk organiser, Chris Thake, found that their choice of charity also helped to recruit new joiners to the walk; many of whom also had a previous connection with St Clare Hospice through family members and friends who had died under the Hospice’s care.

Dani De’ath, Challenges and Events Fundraiser at St Clare Hospice, commented: “We’re so grateful to everyone who took on this huge feat of endurance to help raise money for St Clare Hospice. We’ve been overwhelmed by the amount that they’ve managed to raise for us.

“As an independent charity, we need to raise over £8,000 every day in order to fund the specialist palliative care we deliver to those who need it in our local community. The amount that the Home of Cricket Walk has raised for us could fund more than 25 night sits by our Hospice at Home team, helping so many patients and local families at such a difficult time in their lives.”

The two-day pilgrimage to the home of cricket was blessed by unexpected good weather, but there were still trials along the way. “The last two hours of walking on the first day was a difficult time,” recalls Liam. “We kept thinking that we were nearly there and the finishing point just seemed to stretch away in front of us. We had only planned to walk 45 miles and ended up walking 48 and a half, but we had a great atmosphere between all us walkers; there was a real mix of ages and abilities and we were able to rally each other to keep on going.”

The cricket-loving walkers planned to arrive at Lord’s Cricket Ground by 6.30pm on Thursday 29th July, so that they could take in a ‘Hundred’ game – London Spirit vs Trent Rockets. They actually managed to arrive with an hour to spare, and a TV crew from Sky Sports were there to greet the team as they completed their fantastic achievement.

“The game wasn’t all that, to be honest,” admitted Liam. “But we were all just so pleased to sit down and enjoy watching a game a cricket together, reflecting on what we’d been able to achieve for the cricket club and the Hospice.”

Congratulate the team and donate today

The Home of Cricket walk’s fundraising page, gofundme.com/f/walk-for-malc, is still open and accepting donations until the beginning of September, for anyone who would like to support their local Hospice and celebrate the achievements of this intrepid team of cricket-lovers.

Those spurred on by the Home of Cricket Walk’s achievements, who might be considering taking on a challenge in aid of their local hospice, can visit stclarehospice.org.uk/challenges