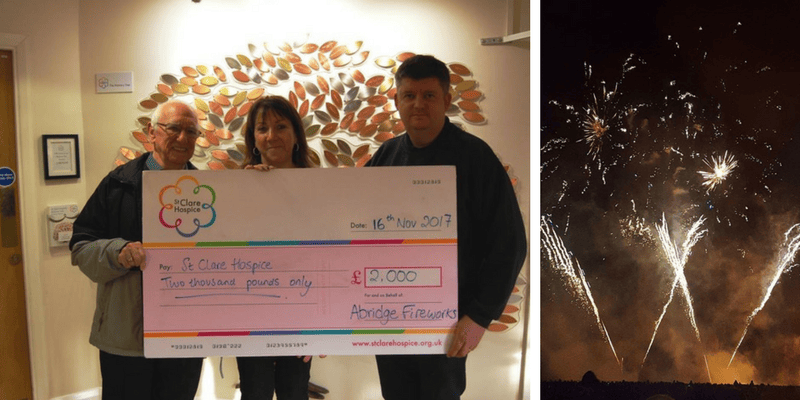 On Sunday 5th November more than 7,500 people turned out for the Abridge Fireworks display which this year was held in memory of St Clare Hospice volunteer, Brenda Sullivan, and fellow Abridge resident, Arnold Raven.

A fantastic £2,000 was donated by the Abridge Fireworks committee following the display, to support the work of the hospice. This was in addition to another £13,000 which was donated to various other local good causes following the 2017 event.

Brenda Sullivan, who started volunteering at St Clare Hospice in 2003 as a volunteer fundraiser and who later became a hospice receptionist, died at St Clare in September 2017. Brenda was a much-loved volunteer and was famous for running the annual St Clare Christmas raffle – raising hundreds of pounds in vital funding for the hospice over her many years of dedicated support.

Brenda and her husband Bill have lived in Abridge for more than 16 years and Brenda was one of the first people to join the Abridge Firework committee as a volunteer when they launched the event in 2011. Bill Sullivan has also volunteered as a St Clare volunteer and helped at this year’s Abridge Fireworks which were held in honour of his wife. Bill Sullivan said:

“Brenda was always the first to sign up to help others. When we first moved to Abridge, Brenda wanted to volunteer at St Clare Hospice as her mother had been cared for by them. She signed up as a fundraising volunteer, helping with events and raffles, and within a couple of years she persuaded me to help too. It was exactly the same with Abridge Fireworks. Brenda was one of the first to step forward to help – and later managed to rope me in too! Brenda’s role was always to collect the money on the gate for the fireworks, and she never let anyone get through without a ticket, because it was raising money for charity. Brenda helped to grow it into the massive fundraiser it now is – making thousands of pounds for worthy local causes.”

“The Abridge Fireworks have been running since 2011 and it has just got bigger and bigger each year – we never expected it to grow into such a monster! But a great monster! Since we started the event, we have raised a combined total of more than £64,000 for charity. Each year we choose some main charities which get a donation of around £2,000 each, and then some smaller local causes, like the local Girl Guides group, who get smaller donations of £250 or £500. This year we have given away a total of £15,000 and for the first time, St Clare Hospice was one of our main beneficiaries.”

Commenting on why they donated to St Clare this year, Danny Blain said: “Brenda Sullivan was one of the first people in the village to put her name forward to support the fireworks. She was also a dedicated St Clare volunteer. When she passed away at the hospice in September, the whole committee felt compelled to help St Clare and fund their invaluable care. We also had another Abridge resident, Arnold Raven, pass away at St Clare in January this year, and so we held this year’s firework display in honour of both Brenda and Arnold. Abridge is a very tight-knit community, and it is quite incredible that as a small village we are able to organise this huge event every year to support local good causes.”

St Clare Hospice Community Fundraising Lead, Dani De’ath, said: “We are so grateful to Danny, Bill and everyone on the Abridge Fireworks committee for choosing to donate £2,000 of the proceeds of this year’s firework display to St Clare. This is a fantastic amount and is enough to fund more than 100 counselling sessions with our specialist family support team, for our patients and their families. Brenda was an incredible fundraising volunteer and I loved working with her. She was famous for her annual Christmas raffle and we will still be calling it ‘Brenda’s raffle’ when we run it in her honour again this year. A beautiful fireworks display was such a fitting way to honour such a beautiful lady as Brenda.”