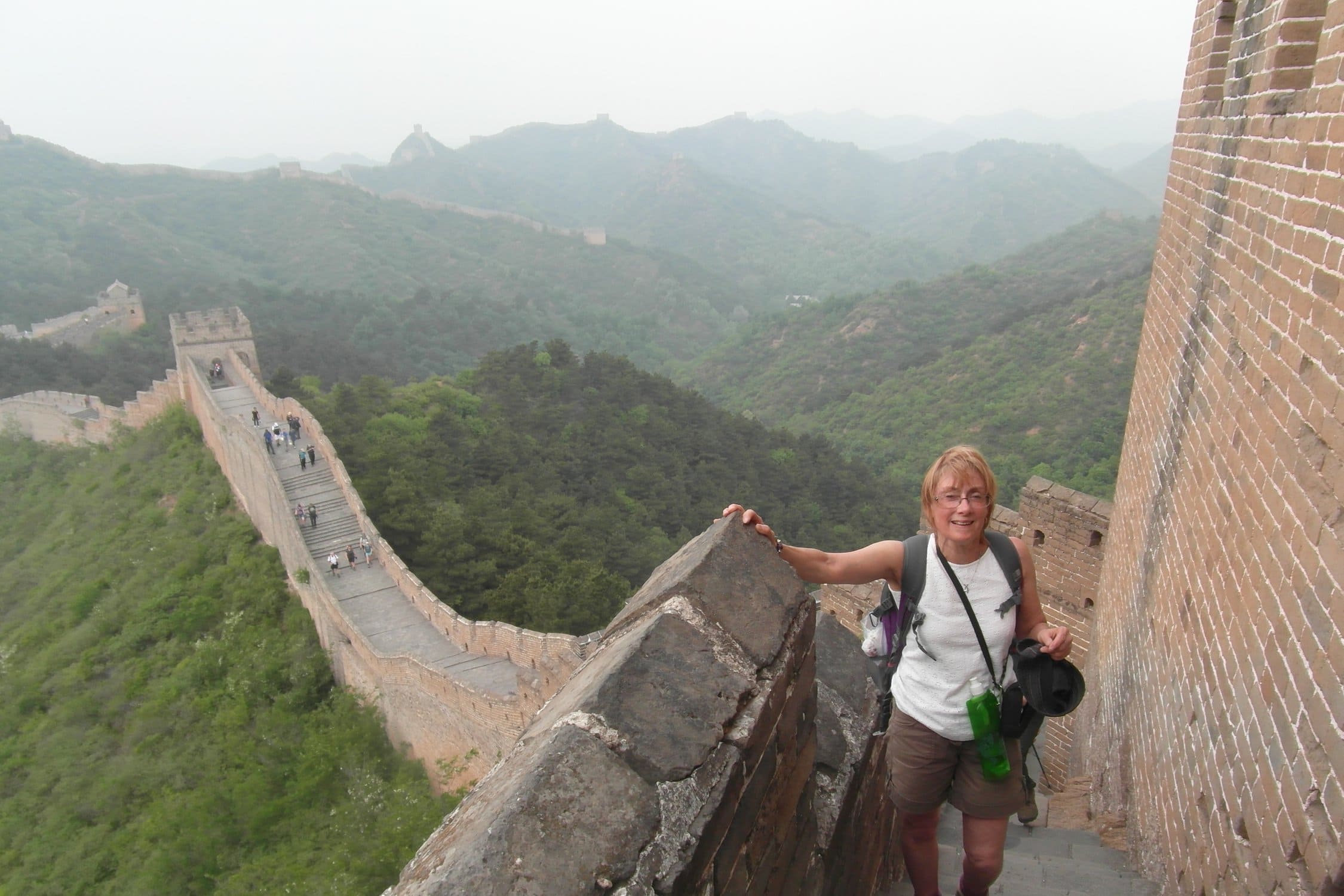 A woman, who had been planning to walk the Great Wall of China with her trekking companion and friend of 35 years, has completed the iconic expedition in her memory.

Val Peacock (aged 61 from Harlow) undertook the five day trek along one of the world’s most famous landmarks in memory of her best friend Angela O’Connell who passed away at St Clare Hospice in December 2014.

Val and Angela were best friends and shared a love of exploring and undertaking walking adventures together. Val said: “Angela and I met as neighbours in Harlow in 1979 and became firm friends when we were both pregnant with our first child. Angela became godmother to my daughter Nicola and we remained friends ever since.”

“In 2010 my daughter and I trekked across the Great Rift Valley in Tanzania and when I told Angela about it she was all fired up to do something similar. In 2012 Angela and I undertook our first trek together – travelling to Peru and following the Inca Trail to Machu Picchu. We trained hard, spending hours walking across fields, along rivers, and through Epping Forest, sometimes getting lost but always having a great time along the way!”

Val said: “After Machu Picchu we immediately planned our next trip, which was to the Rockies in September 2014. Again, on our return, we made plans for our next adventure which was to be the Great Wall of China in 2016. The Great Wall was top of Angela’s list of places to see and we had put it off twice in favour of other treks. Sadly, Angela was taken ill two months after our return from the Rockies and was diagnosed with cancer in her brain, lungs and adrenal gland.”

Commenting on Angela’s care, Val said: “Just two weeks after Angela was diagnosed she was admitted to St Clare Hospice where she spent her last few days being cared for with kindness and compassion by the dedicated medical team.”

“Angela passed away at St Clare Hospice on 17 December 2014, two short months after her 60th birthday. St Clare was such a calm, welcoming and friendly place and really supported the family and friends as well as the patient themselves. The charity is so deserving of our help so that they can continue their amazing work.”

Speaking of her best friend, Val said: “My dear friend Angela was a kind, loyal, hardworking, fun and quirky person with a brilliant sense of humour and a real passion for life and enthusiasm for everything she did. Angela would have so loved to have walked the Great Wall of China and so it was an honour to take part in the trek in her memory and to raise funds to support St Clare.”

Val travelled to Beijing on 7 May 2016 and joined forty other intrepid trekkers to undertake the expedition. The group walked for around 5 hours each day in humid temperatures.

Val commented: “You get hot very quickly from going up and down all the steps. I took so many photos of the walk but they just don’t do justice to the extreme steepness of the steps. On some sections of the wall we were literally climbing up on all fours as they were so steep! Nothing can prepare you for the challenge of climbing the steps. We had to look where we were going at all times to prevent accidents. I was always stopping to look at the fantastic views!”

Val undertook the trip with Global Adventure Challenges who provide the unique opportunity to help ‘lend a hand’ in repairing a section of the Great Wall itself. Val decided to mark the occasion with a personal message to Angela: “On the last trek day we were taken to an area where they are rebuilding the wall. We each placed a brick on the wall and were able to leave a message in the cement under the brick. I left a special message for Angela as this was a trek she so wanted to take part in.”

Val has raised over £2,600 for St Clare Hospice. You can still sponsor her for her fantastic achievement here.

St Clare is offering the chance to take part in the same expedition as Val, trekking along the Great Wall of China, from 14 to 22 October 2017. Find out more and register here.