We never fail to be impressed by the many inspiring reasons why our supporters chose to take up a challenge to raise money to fund our specialist care services for local people with a life-limiting or terminal illness. 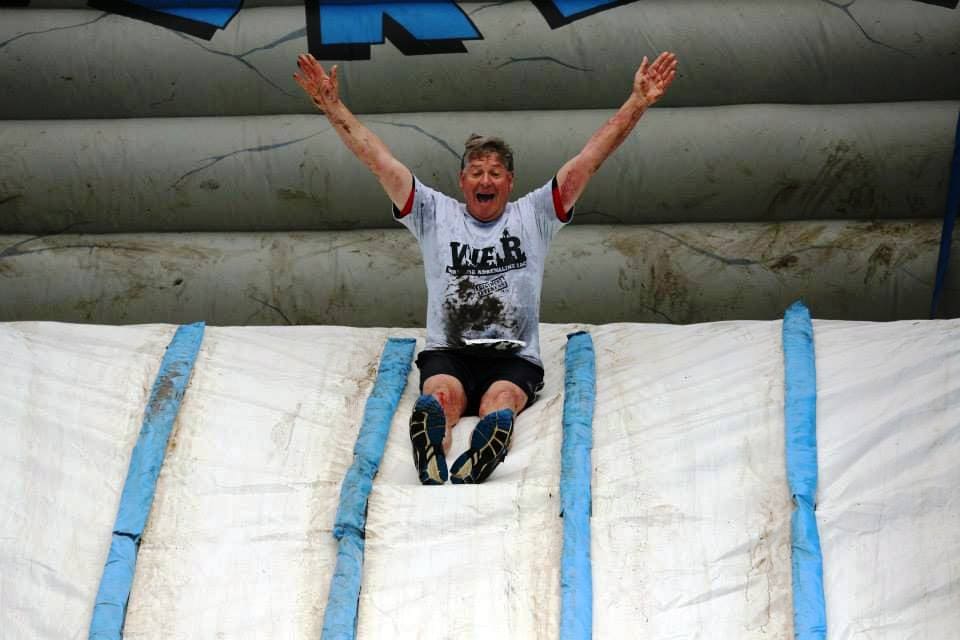 Whether it’s in memory of a loved one, to cross something off their bucket list, or to test the limits of emotional and physical endurance, every person who chooses to run, cycle, trek or jump for St Clare has their own special motivation for doing so.

Here guest blogger Richard Funnell, a 57-year-old sales manager from Bishop’s Stortford, reflects back on the road that has taken him from a mid-life slump to taking on an incredible 14 challenges for the Hospice in a year.

In 2013, I was a typical middle-aged male on that slippery downward slope towards serious health problems. A person enjoying life and taking too much for granted. At the age of 55, I was not taking any daily medication, liked a drink, ate reasonably healthily (but enjoyed the occasional fry up!) and only exercised when I could be bothered.

Then one day I realised how out of breath I was. Doing simply daily tasks, like climbing the stairs, was becoming a major problem, and more importantly, my family were worried about me.

Today however, is a totally different story. I now take part in charity walks in excess of 50 miles, and I exercise every day. In addition, I’ve taken part in two 10km charity runs, finishing in under an hour, an ultra challenging obstacle course, and lost in excess of three stone, all in the past 12 months.

This is the story of my journey to health and, although I doubt it’s unique, I really hope anyone who reads this will be inspired to change their life if they need to.

In many respects my story is typical. My life has been good, I have laughed, been happy, been sad, had all the usual worries about money and the future, but overall I’ve been content. Looking back, there isn’t anything in my life I would change, given a second chance.

But back in the summer of 2013, I jumped on my brand new digital scales and was shocked when they tipped over 18 stone. My first reaction was that the scales must be wrong and I promptly started looking for the receipt so I could return them. This was not a rational reaction. I, like many others, have a tendency to blame everything and everyone except myself when things go wrong.

Typically, I could not find the receipt for the scales, and having confirmed my weight in no less than three separate venues, I came to the realisation that I had a problem; a very large and very serious one. There was nothing wrong with my glands, I wasn’t on medication that transformed me into an eating machine – I was fat and it really was as simple as that.

Being overweight did not come as any great surprise. I didn’t have a suit that fitted, a pair of trousers that weren’t tight, and even my best friend had my number saved in his mobile phone under ‘fatty’. The surprise was just how fat I had let myself become.

In the preceding few years I had had gym memberships, worked with personal trainers and been on some pretty depressing diets. But all this does not come cheap and true to form, I eventually gave up going. But it was clear I had to make some serious changes and I needed to do something I could focus on which would be motivational and life changing. Taking a good, hard look in the mirror and the person smiling back at me, it dawned that I was a prime candidate for hospital. The wake-up call had arrived and, if I hit the snooze button again, it was likely I would die.

But change starts with small steps, and the first was the arrival of Archie. My wife had never really wanted a dog and we were not ‘pet people’ but it was love at first sight and he was home with us within a week. He soon became my best friend and, along with my family, a contributor to changing my life. Archie motivated me to get out walking and within three months we were walking between five and 10 miles on a regular basis. Half a stone fell off me and I was suddenly addicted to walking and the fresh air.

It was a good start, but walking wasn’t enough and I felt I needed to do more. Then one Saturday

morning while walking Archie through Southern Park at the back of Thorley, I stumbled across a Regiment Fitness Boot Camp session. I was so intrigued that I sat and watched the group exercising, but more importantly listened to the instructor’s encouragement, pushing everyone taking part to give more than they had given before. The laughter was infectious even through their hard work. I have always responded to being pushed – this was exactly what I needed and I wasted no time in signing up.

On my first session in June 2014, I weighed 17st 7lb and was very self-conscious of not only how I looked, but my relatively non-existent level of fitness. But the encouragement I received was fantastic. There were lots of jokes about oxygen tanks and the fact I was bright red, and my wife laughed her head off when I crawled through the front door afterwards. But my journey had begun and, after a few weeks running round a field, juggling medicine balls and lifting logs, I was starting to feel much better about myself and also starting to make lots of new friends.

The weight loss was steady and I was, at this point, so motivated, not only by the way I looked and felt, but by the comments from my friends at boot camp and, just as importantly, my wife and daughter. I had set a personal goal in preparation for my 30th wedding anniversary to get into a new suit, and I’m proud to say I am now three stone lighter than when I started. Following a tailored nutritional plan has helped shift the excess pounds, and I even have a new wardrobe which includes skinny jeans (my daughter’s idea!).

With my fitness up and my weight under control, it was time to add more purpose and dimension to my training. So I decided to take part in a sponsored walk in support of a local charity, and one which helps people in my community. Two years ago, my wife was the victim of breast cancer and although it was caught very early and she remains in full remission, it was, and remains, a life-changing experience for her, our family and friends.

Through our own personal experience with cancer, we knew a lot of money quite rightly goes into funding research. However, we knew nothing about what happens when the second and third chance runs out. So we started looking into hospice care and discovered it helps people to live as actively as possible, from the point at which their illness is diagnosed as incurable to the end of their lives, however long that may be. And it carries on caring for families, carers and friends beyond the death of the person they love.

It was at this point I discovered St Clare and, when I asked around, I was amazed at how many people we knew who had been touched, either personally or remotely, by this fantastic organisation. I now had my purpose.

So, I immediately signed up for my first-ever long distance walk, Trekfest: The Peaks. Encompassing a challenging network of footpaths and bridleways, beginning and ending in the picturesque Hope Valley, I trained for the event like a man possessed. I attended boot camp every day and walked from London’s Limehouse along the rivers Lee and Stort into Bishop’s Stortford in one session. Despite feeling more than well prepared, when the day of the trek arrived, it is fair to say that, at the time, it was the toughest thing I had ever undertaken. I was ready, but not expecting, the amount of people taking part, all waiting at the start line, the rain and the terrain. With my two friends, Roy and Tony, beside me, we laughed it off and set off on the next leg of my journey. The walk was tough but we did it, walking through the night, another new experience.

Getting fit and losing weight has been a difficult and challenging journey, but it’s one I am really pleased I am making. Regiment Fitness has helped me to remain focused and motivated and I ‘take it on’ 100% of the time, making me feel as though I am now a contributor and not a passenger. Today, I am the fittest and lightest I have been for many years. Finding new challenges to conquer has kept me motivated and in the past year I have completed the following 11 events all in aid of St Clare.

My next challenge is this month’s London2Cambridge 100km Ultra Challenge and I’m taking on Trekfest: The Peaks again in September. My final event will be Nuclear Fall Out in November.

These events would not be possible if I didn’t train and, whatever you think, I have had to work hard to get where I am today. I am the oldest in our region at Regiment Fitness, but I am able to compete with the youngest. My nickname at training is ‘Dad’ and the younger members are happy to partner me. I don’t see my training or any of the challenges I have taken on as a cost – I view them as an investment in my future, supported by some amazing people.

So, my thanks go to my wife Andree, my daughter Elisse and son Alex, who provided the laughter when at times I wondered what was going on, and Regiment Fitness instructors Tom Elliott, Tom Owen, Paul Glazbrook and Jonny Blackwell. Without their friendship and encouragement, as well as the tools to get fit, none of this would have been possible. I would also like to thank all my friends who have supported my training and fundraising.

You can help Richard reach his £2,000 fundraising target by visiting his sponsorship page.