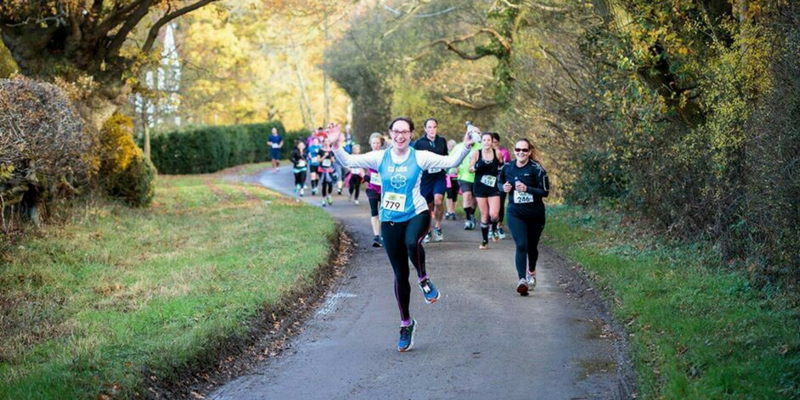 Clare Gallagher from Newport, Essex, has completed a ‘marathon’ challenge, running 12 races in 12 months, in aid of local West Essex charity St Clare Hospice. The mother of three completed a race each month for the whole of 2017 following the care her grandmother received from the charity in 2015.

In total, Clare has raised almost £5,500 in sponsorship for St Clare Hospice as a result of her year-long fundraising commitment. That is enough to fund two weeks’ of the care and support provided by the St Clare Hospice Patient and Family Support Team, which includes bereavement counsellors, social workers, a Children’s Bereavement Service and a chaplain.

Clare (aged 39 and originally from Great Dunmow) is a member of the Bishop’s Stortford Running Club, and originally took up running as part of a healthy lifestyle. Her grandmother, Lily Este from Great Hallingbury, was admitted to St Clare Hospice for care on their inpatient unit in March 2015 and passed away on 11th April 2015 – the same day as Clare ran her first major race. Clare’s love of running, and her love of her Nan and St Clare Hospice, has been connected ever since.

With over 160 race miles covered throughout the year, plus more than 500 training miles, Clare has gone over and above her original challenge by also completing the St Clare 5k Santa run as a bonus 13th race. Details of her 13 races are as follows:

On completing the challenge Clare commented:

“I feel really emotional now that the challenge is over. When I started out in January, I really felt that there was a lot riding on it. I have been so lucky to have been injury free for the whole year, and it feels amazing to have finally completed all 13 races.”

“This challenge has really changed me as a person. I have grown so much through the experience and my outlook on life has totally changed. I have made so many friends throughout the year – and I even met my partner, John, whilst running! John has been with me at every single event this year, and I could have done it without him and my whole family. My mum and dad, sisters and brother, have helped me so much with their moral support and assistance with my fundraising. I cannot believe we have made more than double my original target of £2,500 – raising a combined total of nearly £5,500.”

Commenting on the care Clare’s family received at St Clare Hospice she said:

“The money I have raised is the least we could do as a family to try, in some small way, to repay St Clare. As a family, we cannot thank St Clare enough for caring for my Nan. The nursing staff at St Clare were like angels, everyone was just amazing.”

Clare Gallagher’s year of running has led to a fully-fledged passion for running that is continuing into 2018. Clare’s next challenge is the Breacon Beacon’s Trail Running Ultra Marathon (30miles) on 5th May 2018. To sponsor Clare Gallagher for her marathon St Clare challenge, visit: https://uk.virginmoneygiving.com/ClareGallagher1