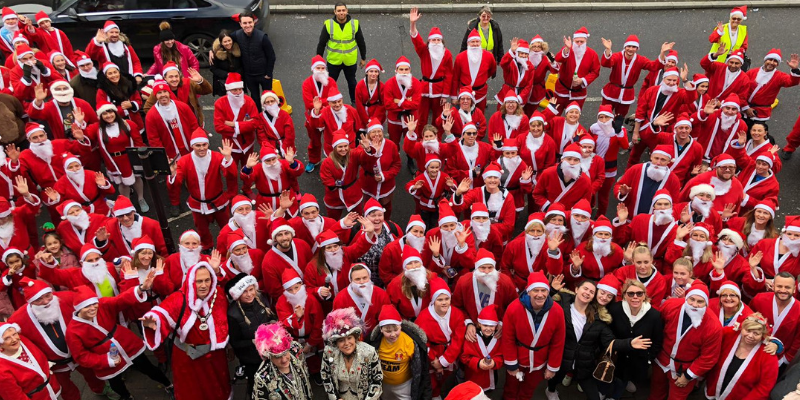 On Sunday 2nd December 2018, local people from across West Essex and East Herts painted Debden and Loughton red and white during the annual Santa Run. More than 150 people, dressed as Father Christmas, flocked to The Broadway to take part in the 5th annual festive family fun-run in aid of their local.

Organised every year by dedicated St Clare supporter, Geraldine Wilson, the 5k route started at Geraldine’s Hair Fashions salon on The Broadway in Debden, with participants setting off at 12:30pm and following a route to Loughton High Road and back.

This year’s event is the fifth annual Debden Santa Run, and it is estimated that, once all sponsorship has been collected, they will have raised a grand total of around £6,500 in vital funding for the hospice. That is enough to pay for more than a week’s worth of our Patient and Family Support Service – a team made up of social workers, bereavement counsellors, a Children and Family therapist, and a chaplain.

More than 150 people took part in the event, including youngsters and dogs, with prizes awarded in a range of categories. The winners in the Team category were members of the Orion Harriers, a Chingford-based running club.

Committed volunteer fundraiser, Geraldine, has supported St Clare for more than 10 years and she launched the Santa Run event in 2014. This year will bring the combined total raised at her Santa Run events to almost £40,000.

Commenting on this year’s event, Geraldine Wilson said: “It is my pleasure to organise the Santa Run in Debden every year, in aid of St Clare. I know what a difference St Clare makes to so many local families, at such a difficult time in people’s lives, and so many people say that they wouldn’t have been able to cope if it wasn’t for St Clare. So it is so important to me that we find a way, as a community, to give something back to St Clare so that they can be there for everyone who needs them in the future.”

Geraldine continued: “The whole of Debden comes together to support the event – donating auction and raffle prizes, and even entering teams to join the run. It really is a true community event, with a wonderful sense of togetherness and shared purpose, and I am so grateful to everyone for their support.”

Commenting on the annual yuletide run, St Clare Community Fundraising Lead Dani De’ath, said: “Geraldine has been a massive supporter of St Clare for many years and her Santa Run is one of the best community events of the season. This year’s Santa Run was so fun, and amazing to once again witness such a great turnout at the event. The flocks of Santas running down The Broadway really are a sight to behold!”

Dani continued: “We’d like to say a huge ‘thank you’ to everyone who came and participated and helped to spread the St Clare festive cheer in the local community. A massive ‘thank you’ to Geraldine for organising the event, and for her continued support in helping us to raise vital funds during the festive period, helping us to care for patients and their families this Christmas.”