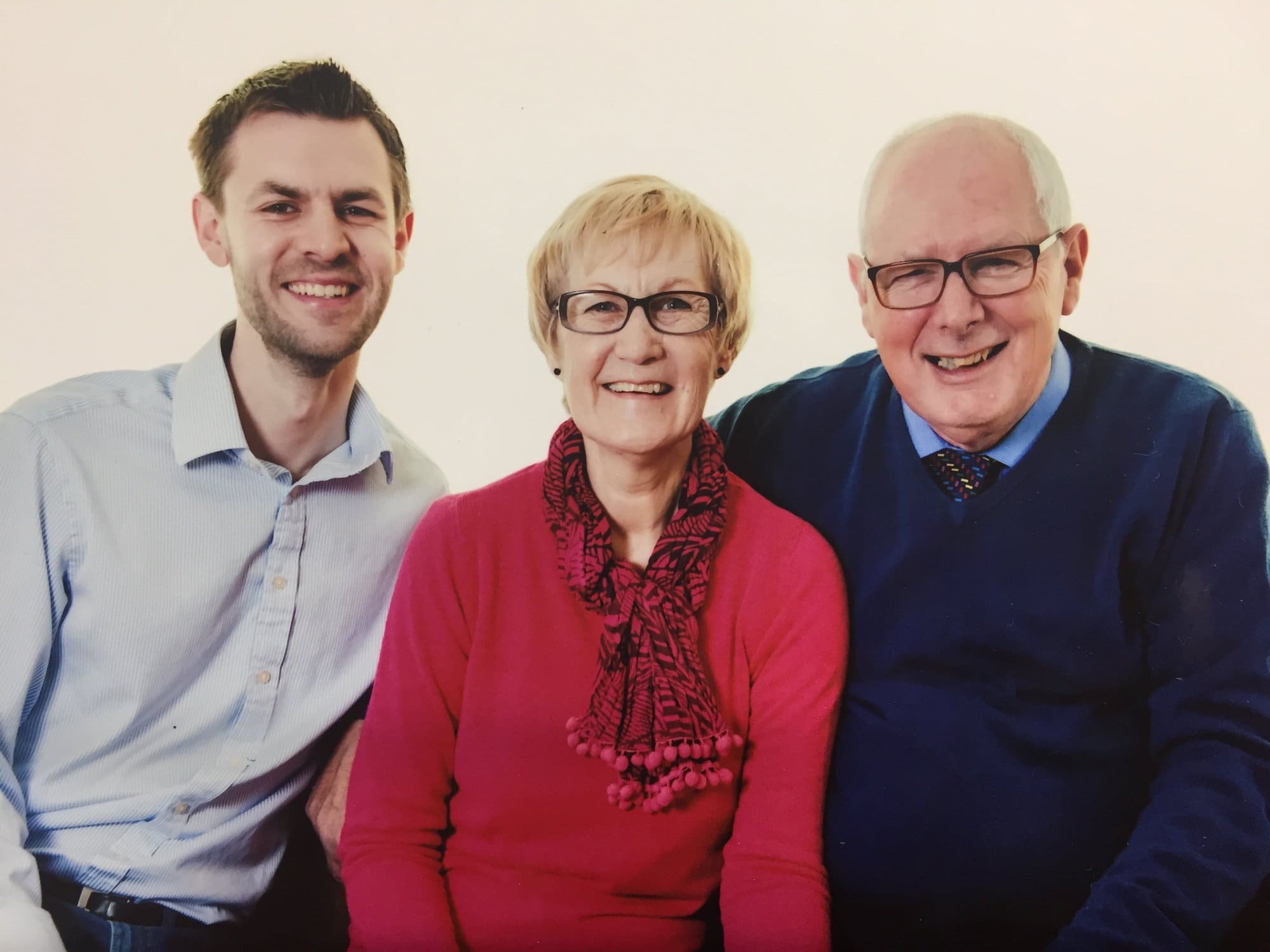 Our first ever member of staff, the incredible Stanley Wright, recalls his time in service to St Clare from 1991 to 2001

Stan worked with St Clare as both our Voluntary Services Manager and later as our Facilities Manager. Stan returned to St Clare for a stay on our Inpatient Unit in June 2017, where he reminisced with us about his wonderful memories of St Clare’s earliest years…

How was St Clare first created?

“In 1990, the St Clare Trust was formalised after lots of research and planning. There were many legalities and liaisons with health authorities to work through, which constituted much of the groundwork.”

“At this point, St Clare had no building or staff, and needed volunteers to help to fundraise, so they employed a Voluntary Services Manager as their first member of staff – and that was me!”

“The other first members of staff who were appointed a few months later were Janet Lodge, the first Day Care Sister, and Jo Brennan (a founding trustee) who became the first CEO.”

What brought you to St Clare in the first place?

“I retired early, when I was 50, on the Boxing Day of 1990 – the day after my Christmas Day Birthday. I had a long retirement of three days, before starting at St Clare on New Year’s Day of 1991!”

“I’d been planning retiring for some time, but I didn’t want to go back into the industry of commerce. I wanted to get involved with a community project, in the voluntary side of life. St Clare was starting from nothing, and I thought it was the ideal thing that I wanted to be involved with.”

When did St Clare first start its hospice care?

“St Clare opened its first Day Care centre in March 1991 at Sumner’s Farm House in Harlow, a council-run establishment, where we were able to use one of their rooms as a Day Centre. Then, throughout the year, we gradually opened Day Centres in Stansted Mountfitchet, Saffron Walden, Loughton and Waltham Abbey. They were open for one day a week each, so everyone could have Day Therapy once a week throughout West Essex.”

“I also recruited volunteers to provide support, who were on call 24/7. A patient could phone them up, and then they’d go and see you and help you with whatever you needed – even if it was just for company.”

What other kinds of things did the volunteers do?

“We had volunteer drivers to take patients to Day Care centres, and volunteers who helped us to fundraise in various ways – sometimes going out as ambassadors for St Clare.”

“My wife, Heather, was in fact the first volunteer for St Clare, and she did lots of things including cooking meals for the Day Care patients.”

“Also, once we started acquiring equipment, a local courier firm phoned to offer us the opportunity to store it all in his warehouse, because we had nowhere to put it! Sometimes, they would even help us to deliver things to patients using their lorries.”

“We had lots of help from lots of people, all on a goodwill basis.”

When did St Clare acquire its grounds?

“In 1994, we opened St Clare’s future home, and the place that the hospice’s Inpatient Unit would be built – which was always a vision of ours. Originally, all that existed was a house in the middle of a large garden, which was eventually converted into what is presently the Day Therapy department.”

“We sat outside this farmhouse for several nights as we wanted to know if the M11 noise was going to be intrusive.  In the end, we decided it wasn’t, and that the location would be an accessible central point for all of West Essex.”

“We made a bid for a grant to buy the land but it was sadly rejected, so we kept raising money for another year, by which time the plot was miraculously still for sale! We were very, very fortunate, and managed to acquire the house. Our volunteers had to look after it and the grounds, as the gardens had run awry – and they were just brilliant. We had a little group of volunteers who were always there for St Clare.”

How did St Clare fundraise back then?

“Once the farmhouse was refurbished as offices, we started to employ fundraisers to support and assist the amazing work of our fundraising volunteers and friends groups.”

“We took part in all sorts of events to try to raise money for our Hospice right from the start, including jumble sales, coffee mornings, bring-and-buy sales and cake sales – all organised in our local church and school in Potter Street, Harlow.”

“We had Kenny Ball down at Harlow’s Town Park performing in one of the free concerts, and I got involved on the microphone doing a speech about St Clare. There were several celebrities there, and with them, my wife and I all took a corner each of a travel rug and went through the crowd so people could throw money in! We didn’t have collection tins or anything, so we just used a rug and tied it all up to bring back to the Hospice!”

“We also had a stall, selling things, at a voluntary services open day in Loughton. We put together a pitch to promote the newly founded St Clare, and blow me down, Princess Anne was there and she approached us to talk about the new Hospice!”

“We accepted any opportunity that came along to promote St Clare and raise awareness of hospice care. It was important that nothing stayed static and we kept moving – Jo, the CEO at the time, was a great motivator and pushed us forward.”

How did St Clare become the Hospice we know today?

“The Inpatient Unit was built in 1999 and opened in 2000. At this point, I had become the Facilities Manager so I was responsible for the building, in addition to the volunteers.”

“There was quite a lot of work that needed doing. I would often come in smartly dressed for the office, but have a boiler suit in my bag and sometimes would have to change clothes so that I could help out with the manual work!”

“We had a great team of volunteers in place that had a desire to help – and come what may, we would find ways to do things no matter what. One time, we were delivering a bed to someone and found that we couldn’t get it through the front door. So, five of us teamed together and we put it through the kitchen window!”

“It was that sort of ingenuity and will to get things done that made it all work. We prided ourselves on being able to do things for people throughout West Essex, as and when they needed.”

Where did St Clare get its name from?

“All of the hospices worked together remarkably well, and I attended various meetings with hospices around the area to share information and help each other, yet, St Francis Hospice helped a lot.”

“The reason for the naming of St Clare Hospice is because in historical terms, St Francis is said to have helped St Clare as she was a follower of his religious teachings, and is often said to be his ‘little sister’. St Clare Hospice was thus named as a tribute to that.”

What was St Clare’s message to the public back then?

“When my colleagues and I used to go and talk to different groups to raise awareness and funds for the hospice, we would assure them that hospices were not ‘doom and gloom’; they are about hope, trust and support. That was the core message.”

Do you have a favourite part about being in the St Clare family?

“I enjoyed every second of it and it was great fun! Yet, my favourite thing, and what I am most proud of, is recruiting some fantastic volunteers. We couldn’t have done it if it wasn’t for the support of the local community.”

“Every day was different, too. You never knew what was going to happen. You went with the day, and that’s what made it enjoyable.”

What was it like coming back to St Clare as a patient?

“When my wife and I parked outside, I experienced a feeling of ‘coming home’.”

“We were met with a wonderful, warm welcome, and everything was there for us. By the time I came into my room, I was perfectly at comfort. Everyone was so friendly and welcoming, and they said that my family could stay all night if they wanted, which put my wife at ease.”

“It’s a ‘human’ kind of care. Everything has happened nice and gently, and quietly. When I was asked what I wanted for breakfast this morning, I knew that I was speaking to someone who was going to go away and talk to the Chef and tell him, ‘this is what Stan needs’. It’s very much a personal kind of care – and that was the message I tried to get across during St Clare’s beginnings.”