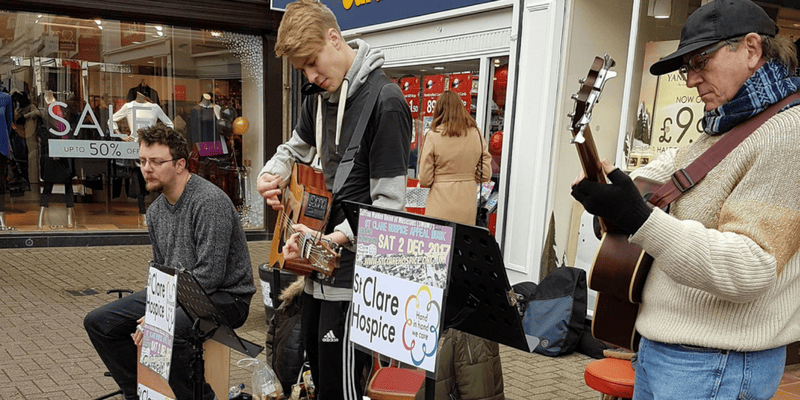 A group of local musicians raised almost £500 for St Clare at their charity busk appeal in Saffron Walden!

On Saturday 2nd December 2017, over 25 local musicians came together throughout the streets of Saffron Walden to perform in aid of St Clare Hospice.

Organised by members within the Facebook networking group ‘Saffron Walden Union of Musicians’ (SWUM), almost £500 was raised in vital funding for St Clare as volunteers joined forces to busk in the town’s Market Square and King Street. £500 is enough to pay for over ten visits to people in their own homes from Hospice at Home nursing assistants – who will be continuing their around-the-clock care and support throughout the Christmas period.

“After we heard about the break-in at the St Clare shop, we just felt like we had to do something to help out; quite a few of our members have had loved ones looked after by the wonderful hospice, so we just felt so angry about what happened. Aaron Burrell, fellow SWUM musician, suggested that we do something with the group, and with the support of Saffron Walden Initiative’s Jacqui Portway, we were able to make this happen!”

Commenting on the success of the fundraiser, Barney said:

“It was an honour and pleasure to be able to play in aid of such a good cause that has touched the lives of hundreds of local people. I want to say a huge ‘thank you’ from the bottom of my heart to everyone who played or came along to help out, for their hard work and great performances, and to everyone who made a donation on the day. You never know when you might need the care and comfort of the great people at St Clare Hospice, so it’s only right that we recognise the incredible work they do. We hope to make it a regular event, and do it again when the weather gets warmer!”

For more information about the Saffron Walden appeal busk, please get in touch with Barney French on: [email protected].