Ray set to run 13 races in honour of best friend 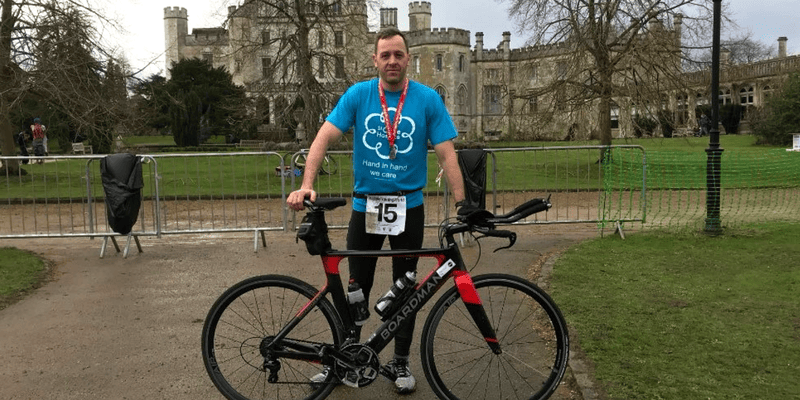 Throughout 2018 Ray Cogan, a dedicated St Clare supporter from Stansted, will be lacing up his trainers and setting off on a “marathon” 13 races in 12 months running challenge in aid of the hospice. The father of two is undertaking the year-long running challenge, taking part in a race each month for the whole of 2018, after his best friend received care from St Clare in 2015.

Ray Cogan (age 35 years, from Stansted Mountfitchet) ran his first marathon in 2009 whilst serving in the Royal Engineers. His best friend, Dave Ramm, was diagnosed with terminal cancer in September 2015 and was admitted to St Clare Hospice in October. Dave died on 25th November 2015 at the age of just 35 years, just 7 weeks after being diagnosed.

“Dave and I both went to Leventhorpe School in Sawbridgeworth and that’s where we became friends. After school I joined the army, so I lived away for a while, but we still stayed in touch. I was one of Dave’s ushers at his wedding. We were never out of touch with each other. Some friendships you dip in and out of, but that was never the case with me and Dave.”

Reflecting on the care Dave received at the hospice, Ray said:

“The staff and volunteers at St Clare did so much for everyone, not just for Dave, but for his friends and family as well. I was so impressed by the level of care and compassion from all the people that work at St Clare – especially the volunteers. They have their own lives to live, they probably have a husband or wife and children at home, and other hobbies they could pursue – but they choose to come to St Clare in their own time and devote their own time and effort. I think giving up your time to help other people at a very difficult point in their lives, is a very selfless commitment and an honourable thing to do. That is why I am doing my part to help St Clare by fundraising this year.”

Ray Cogan secured a place in the London Marathon 2018 after he applied to St Clare Hospice for one of their six Gold Bond places. On attending a marathon evening event at the hospice, and hearing from a past participant, Ray was inspired to expand his St Clare running to a year-long challenge including a run or a triathlon each month of 2018.

“I was inspired after hearing from a challenger called Clare Gallagher who ran 12 races in 2017 for St Clare, and I thought, I want to do that! I went home and started planning straight away – mapping out what challenges I could take part in each month. I am most excited about London Marathon, this will be my third time running it and it’s incredible, but I am also really looking forward to doing the Paris Marathon too. They are both in April, only 2 weeks apart, so I am bit crazy taking on two marathons so close together. But I know how much St Clare helped Dave and his wife Sophie, and that will spur me on to complete the challenge.”

Ray’s challenge will see him cover over 250 race miles throughout the year, plus an estimated 1,500 in training miles. Ray has even decided to add a bonus 13th race by aiming to complete the St Clare 5k Santa Run when it returns to Debden in December 2018.

Details of Ray’s 13 races are as follows:

“Ray is undertaking a huge challenge for us this year – 13 races in 12 months is no mean feat! His first race was on Sunday 28th January, the Ashridge Duathlon, a 10k run, 44k cycle followed by another 5k run – and he flew around it in 2 hours 56 minutes! Ray has got a mixture of triathlons, half marathons and full marathons lined up for the whole of 2018 and Ray is aiming to raise £6,000 for us this year – so he is not only a marathon runner, but a marathon fundraiser too – a hospice hero!”