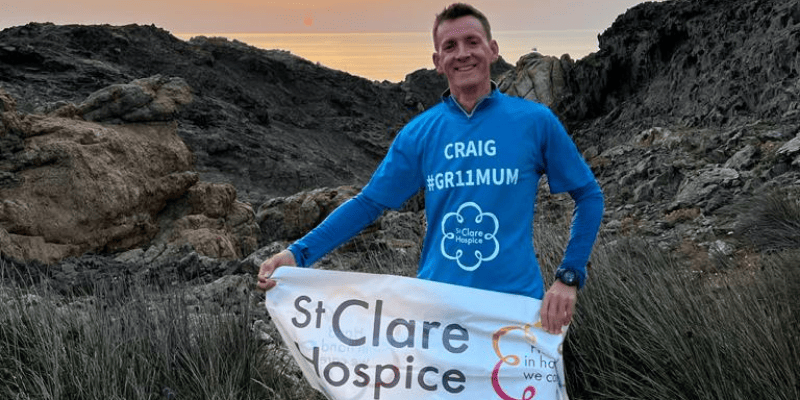 A son is taking on a two-month long, 820km, solo trek across the Pyrenees mountain range in memory of his mother, and to raise funds for the Hospice charity who cared for her.

Craig Jenkins (age 49 years from Takeley and now living in Valencia, Spain) has set himself the challenge of walking the GR11 route, that runs through the Spanish Pyrenees close to the border with France, and covers 820km (522 miles). The trek will take Craig an estimated 60 days and he set out on Sunday 3rd July 2022. His fundraising target is £1,000.

Craig is raising funds in memory of his mother, Linda Jenkins, who was cared for by St Clare Hospice in Hastingwood in 2015. Linda attended the Hospice charity’s Wellbeing Hub for day services, as well as receiving care on the Inpatient Unit, before her death from a brain tumour on 9th December 2015.

Trek of a lifetime

Craig commented, “Ever since I was with Mum in the Hospice, I have wanted to do some sort of challenge to fundraise for St Clare. Seven years after Mum’s death, I am finally, hopefully fit enough to take on the huge challenge I have planned.”

“During July and August I will attempt to hike solo across the top of the Pyrenees mountain range in Spain from the Mediterranean Sea to the Atlantic Ocean. One of the biggest challenges is the elevation change – ascending and descending a total of 128,000ft which is the equivalent of climbing up and down Mount Everest 6 times!”

“I will be carrying everything I need on my back, including a tent, sleeping bag, cooking stove and food, and stopping at small mountain villages every 3 or 4 days for supplies. I eat a strict vegan diet, so finding supplies in remote Spanish villages adds another layer of difficulty for me!”

Motivation for the challenge

Commenting on the difference St Clare Hospice’s care had made, Craig said:

“The whole experience at St Clare was really positive. From the moment you walk in to the Reception, to the people who work in the kitchen, to the staff and volunteers you meet. The whole Hospice has a really good energy about it, and you come away from there feeling that energy. It’s an amazingly happy place.”

Craig continued: “St Clare Hospice is an amazing charity with incredible staff who provide end of life care for terminally ill people. In 2015 I used to take my mum to their weekly day centre and then towards the end she spent 14 days in their 24hr specialist support ward. St Clare Hospice is an independent charity with limited government funding, and with your help I want to do what I can to help support them.”

Craig began his trek on Sunday 2nd July 2022 starting at Cap de Creus in Catalonia, the most easterly point of mainland Spain, on the edge of the Mediterranean Sea. He is due to finish 60 days later (31st August) at Cape Higuer on the Bay of Biscay, the western-most edge of the Pyrenees.

The route is divided into 45 separate stages, varying between 10-30km each, and Craig plans to complete most stages in one or two days, with scheduled rest days. That means Craig will be walking around 15-20km per day, camping each night where he finishes.

You can sponsor Craig on his Just Giving page at: justgiving.com/fundraising/gr11mum