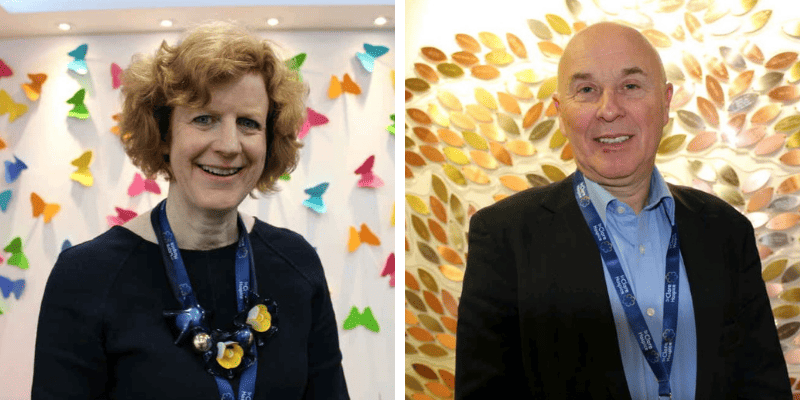 St Clare Hospice has welcomed two new Trustees to support the governance of the charity and further its work supporting people across West Essex and East Herts at the end of their lives. Deborah Fielding (from Great Dunmow) and Mark Astarita OBE (from Harlow) joined the Board of Trustees of the Hastingwood-based hospice charity at the final Board meeting of the year on 4th December 2018.

Deborah Fielding has joined the Board as Trustee and is an experienced NHS chief Executive who has worked in the healthcare sector for over 40 decades. Deborah started her career as a nurse at Addenbrooke’s Hospital in Cambridge and worked as a midwife and health visitor, before moving into health service management. Deborah was the Chief Executive of the West Essex Clinical Commissioning Group until January 2018 when she took up the post of leader of the Hertfordshire and West Essex Sustainability and Transformation Partnership (STP). Deborah’s role as Chief Executive of the STP sees her leading the continued transformation of health and social care services across the area of Herts and West Essex – which includes the area which St Clare Hospice supports.

Mark Astarita OBE also joined the Board as Trustee in December 2018, and brings more than two decades of experience from the Fundraising sector including as Director of Fundraising at the British Red Cross for over 14 years. Mark was awarded the Order of the British Empire (OBE) in 2015 in recognition of his services to fundraising, and during his 25-year career he has been responsible for raising almost £1.5 billion pounds. Mark is also the former Chair of the Institute of Fundraising and has previously held the role of Trustee at the Voluntary Services Overseas (VSO) and St Joseph’s Hospice based in Hackney.

On joining St Clare Hospice’s Board of Trustees, Mark Astatrita OBE said: “As a local resident of Harlow, it is such an honour to be elected to the Board of St Clare Hospice, and to be a small part of bringing compassionate care and support to so many local people at the most difficult of times. I am passionate about the support that hospices around the UK provide having experienced hospice care personally, and I will strive to ensure St Clare continues to be here for the people of West Essex and East Herts, today and tomorrow, and in to the future, providing the best care possible to local families.”

Commenting on the arrival of the two new Trustees, St Clare Chief Executive Sarah Thompson said: “We are thrilled that Debbie and Mark have joined our Board as new Trustees. These two new members bring substantial and wide-ranging skills and experience from the healthcare and charitable sectors – including Debbie’s NHS executive experience and Mark’s incredible fundraising record. They will serve as vital members of the Hospice team as we look to grow and extend our services in the coming months and years. We are delighted to be working with both Debbie and Mark, and are extremely grateful for the time and expertise which they will be bringing to the Board as, like all our Trustees, unpaid and highly skilled volunteers.”

Read about our team of Trustees here