“The support we received from St Clare Hospice, at one of the most difficult times in our lives, was transformative. I had no idea how much a hospice could do, or the breadth of support they would provide to us." 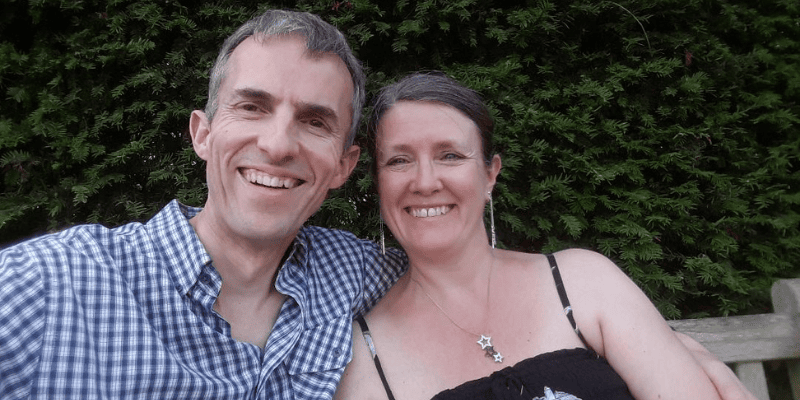 “It couldn’t have come as a bigger shock. At the New Year’s Eve party we’d been discussing with friends our aims and plans for the New Year, and then we were hit with this news. Heather hadn’t been well, but we never thought it was anything serious.”

“It was so unexpected and a shocking scenario to find ourselves in – that my wife, and my best friend of 30 years who I shared everything with, had been diagnosed with a terminal illness. Heather was only in her 50s and we thought we had years ahead of us together.  We had plans for our retirement.”

“Over the following months we were very well supported by our family, friends and church.  On the medical front, the hospital care was fantastic and the doctors and nurses managed Heather’s symptoms and tried to maintain her quality of life as best they could. But nothing could hold back the march of the cancer.”

“It reached a point where we had run out of road, and there was nothing more the hospital could do for Heather. That’s when we were referred to St Clare Hospice.”

“I hadn’t any involvement with hospices before and thought, along with a lot of other people, that they were a place where you go to die with specialist care. I had no idea how much a hospice could do, or the breadth of support they provide.”

“We received a home visit from Annette, one of St Clare’s Clinical Nurse Specialists, to speak to Heather and I about how the Hospice could support us. From the word go Annette was such a help.”

“It was a distressing time and we were in unchartered waters – just not knowing what terminal cancer looked like, and how we would need to adapt. It was a huge challenge to go through, and to have the support of Annette and the other Clinical Nurse Specialists, in person and on the end of the phone, holding our hand through the whole journey, was so invaluable.”

“The support we received from St Clare Hospice, at one of the most difficult times in our lives, was transformative.”

“Annette was geared up to speak to us about Heather’s end of life care, and having someone who could explain what the route map looked like, and what other hospice services were available to help us, enabled us to feel in control of the situation.”

“As terrible as it was to see Heather decline, it must be so much more scary for people who don’t have the support of somewhere like St Clare. It was really a relief to know there was somebody you could go to, to provide the information you need, and the promise of more support down the road, should you need it.”

“In August 2019 Heather was struggling with symptoms including pain and nausea and was unable to eat, which meant she had insufficient energy to concentrate on anything, even talking. Annette suggested a stay on the Inpatient Unit to help get Heather’s symptoms under control, and we were lucky that they found her a bed quite quickly.”

“From the moment Heather arrived on the Inpatient Unit, the team were just lovely and supportive in every way. The team were able to get Heather’s pain and nausea symptoms comfortably under control and they even helped her to start eating again, although it was an uphill battle due to how advanced the cancer was.”

“The time in the Inpatient Unit was so helpful for me too, being able to speak both formally and informally to the nurses and doctors, and get much-needed advice and reassurance. Particularly, it helped me to be orientated for the final weeks of Heather’s life – so that all along, it felt like we stayed in control of the situation. The staff empowered me to support Heather in the best way I could when she was at home, both before and after her stay on the Inpatient Unit.”

“The information and support I received from both the nurses and doctors was excellent, and gave me confidence to cope with, and to help manage, the situation we were in.”

“At every stage of Heather’s journey there were different people from the various Hospice teams, providing the support we needed at that time. We were supported throughout, both practically and emotionally, which helped massively to cope with the whole situation – as difficult and as challenging as it was.”

“In early September, Heather died at home, where she had wished to be.”

“I am really so thankful to St Clare Hospice.  At one of the most vulnerable times in your life, there is this incredible team of people who step forward to hold your hand and walk you through an extremely difficult journey.”

“I can’t imagine what it would have been like without St Clare’s help.”

In October 2020 St Clare Hospice was awarded £25,000 in funding from the Lloyd’s Market Charity Awards, thanks to an application put forward by Alan, following the care he and his wife Heather had received.

£25,000 is a fantastic amount for St Clare, and is enough to fund nearly two weeks of the vital Hospice at Home service which supported Heather up until her death. This year, as St Clare faces the challenges of Covid and the resulting blow to their fundraising income, these funds are needed more than ever.

Alan, who works for a Members’ Agency in the Lloyd’s market, saw an email circulated to Lloyd’s market staff, asking for worthy charitable causes to be nominated for the awards, and he immediately thought of St Clare Hospice. Alan told us:

“When I nominated St Clare for the award, I never expected that they would be awarded the top amount of £25,000 – I was absolutely thrilled when I heard that St Clare had been selected! 30 charities were given donations, and we were up against stiff competition – which makes the win even sweeter.”

“I know first-hand how much St Clare’s care means to families like mine, and I am so grateful for the support we received at one of the most difficult times of our lives. To have the hospice’s support was just invaluable – I don’t know what we would have done without them.”

If you are able to nominate a charity for a grant or funding, like Alan did, we would be so grateful if you chose to nominate St Clare Hospice. Significant donations like this, really do mean so much to the families we support.

For more information on how you can support St Clare Hospice through your business, visit here.