“Gill, our St Clare nurse, was so dedicated and supportive – without her we would have been floundering. I knew that if I needed her, she would always be on the end of the phone.” 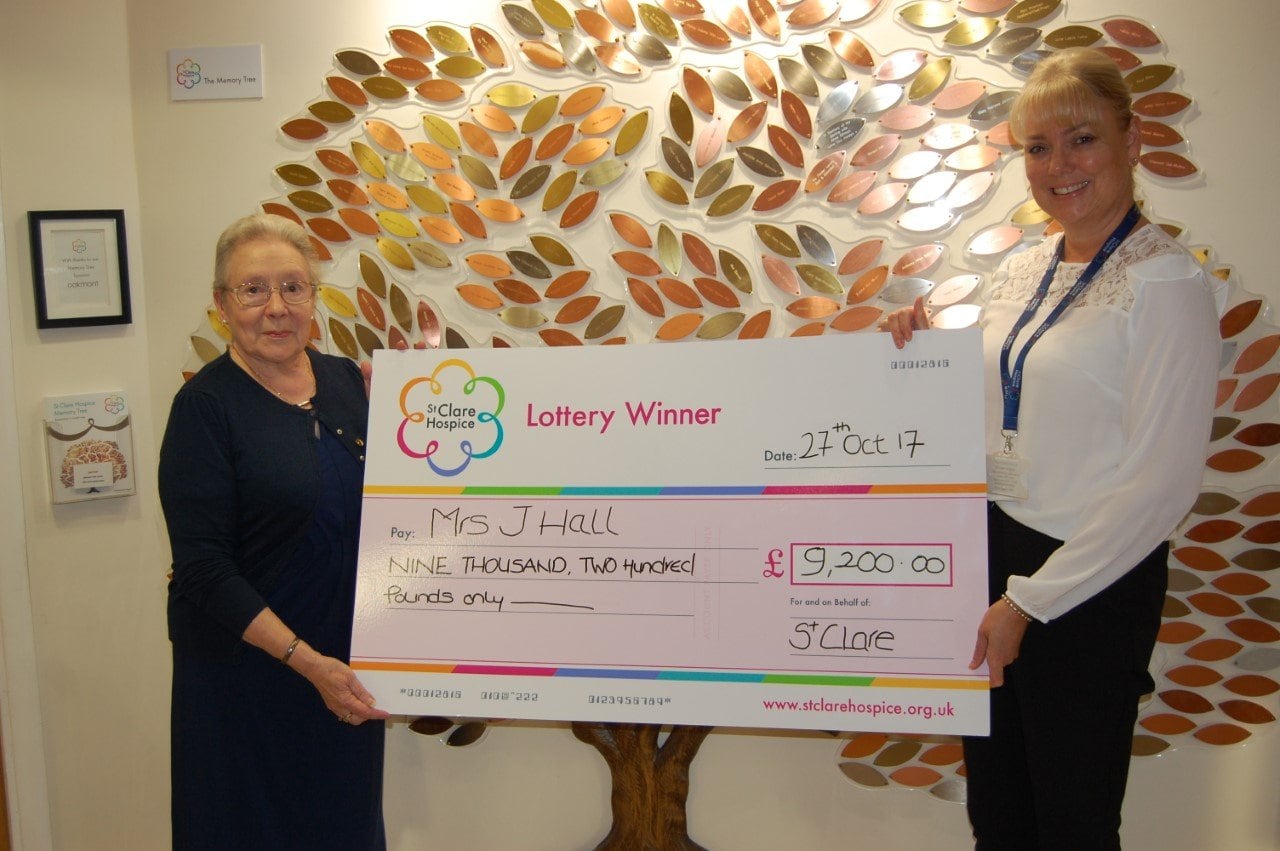 “Derrick and I met in 1959 when he was 22 and I was 20 years old. We met, of all places, in a record shop in London! He worked in his friend’s record shop, and I went in and met him. A couple of weeks later we went on a day trip together – and that was it, we were together from then on! We were married in London on 1st October 1960 and his friend from the record shop was his best man! I am still friends with him to this day – a lifetime later.”

“Derrick moved out to Harlow when his job moved, and I went with him in October 1960. We have lived in Harlow the whole time. That is where our three sons were born, and we now have three grandchildren and our lovely great-granddaughter too.”

“I hadn’t experienced St Clare’s care myself, until my lovely husband Derrick was diagnosed with prostate cancer in February 2013. Derrick went to his GP with a pain in his hip, but it turned out that he had cancer. It had already spread to Derrick’s bones, and they tried to give him Chemotherapy but he wasn’t strong enough and it wasn’t working. It was through Derrick’s oncologist that we were referred to St Clare Hospice, and we received a visit from Gill – one of the clinical nurse specialists.”

“It was in 2013 when we first met Gill, the St Clare nurse, she was so dedicated and supportive – without Gill we would have been floundering.”

“Gill came and visited Derrick and I at our home in Harlow. She got all the paperwork sorted for us, so Derrick could get a disabled badge. Gill helped to get everything that we needed in place, and if we needed any advice she was always there for us.”

“Gill advised us what medication Derrick needed, and how to take it. I knew that if I needed her, she would always be on the end of the phone.”

“St Clare used to phone us to check how Derrick was doing – so we knew that we weren’t left on our own. I knew that if I said ‘please come’ – she would have been there, just like that.”

“In the end, Derrick had a fall and broke his hip, and he was in the hospital recovering from the operation. He became poorly and in the end he couldn’t be moved to St Clare Hospice because it was too dangerous for him to travel. Derrick passed away in February 2016 at the age of 79 years – after we had been together for 57 years.”

“Derrick and I had such fun times together – even when he was ill, he laughed all the time. He wouldn’t let the cancer get him down.”

“Derrick had been in the Parachute Regiment and he loved planes, so he used to volunteer at Duxford museum. He also used to help to sell poppies for Remembrance Sunday at the Harvey Centre in Harlow. On our 25th wedding anniversary, Derrick arranged for us to go up in a Dakota and fly over Duxford – just Derrick, I and the pilot. It was amazing. Volunteers from Duxford even came down to Derrick’s funeral, it was lovely to have them there.”

“Even when Derrick was poorly he travelled miles to air shows and museums. We even went on holiday to Italy, and visited Austria in the snow! Derrick had just been diagnosed with cancer, but we had the holiday booked, so we decided to still go. He so wanted to go to Austria in the snow – so we did!”

“We had wonderful times together. We were so young when we met, and he was the only love I ever had. 57 years together is a very long time – we will remember him forever.”

“I became a St Clare Lottery player back in about 2003 – when someone came to my door at my home in Harlow and asked if I would like to play. Having lived in Harlow for over 50 years, you hear about people who need St Clare’s care, and I had a friend whose Dad had been cared for at St Clare – so I knew it was a good cause.”

“I signed up to play one line a week, and see my payment each quarter as a donation to the work of the hospice. I certainly never expected to win anything!”

“Over the years I have won £10 a couple of times, but I have always just donated it back to the Hospice. I think that you need it more than I do.”

“I couldn’t believe it when I got the call from St Clare’s to say that I had won the Lottery rollover. It was a good job they told me to sit down to hear the news! I am still in shock that I have won the rollover.”

“I thought it was a joke a first. Then I looked over at a photo of Derrick, smiling at me, and I started crying. I still can’t believe it!”

“My plan with the winnings is to have a new kitchen fitted. Derrick and I had talked about a new kitchen, and I had been saving up to change the cupboards, but now I can get the whole kitchen refitted. I am even going to treat myself to a new oven. This will be the kitchen that St Clare built! It is absolutely wonderful to be able to do it.”

“I am also going to make a donation to St Clare, and to donate to have a leaf on the Memory Tree for Derrick. The Memory Tree is so beautiful – I love the bronze colour of the leaves – they are like autumn leaves. The autumn is so special to me and Derrick because we met and were married in October. It will be a lovely tribute for him.”