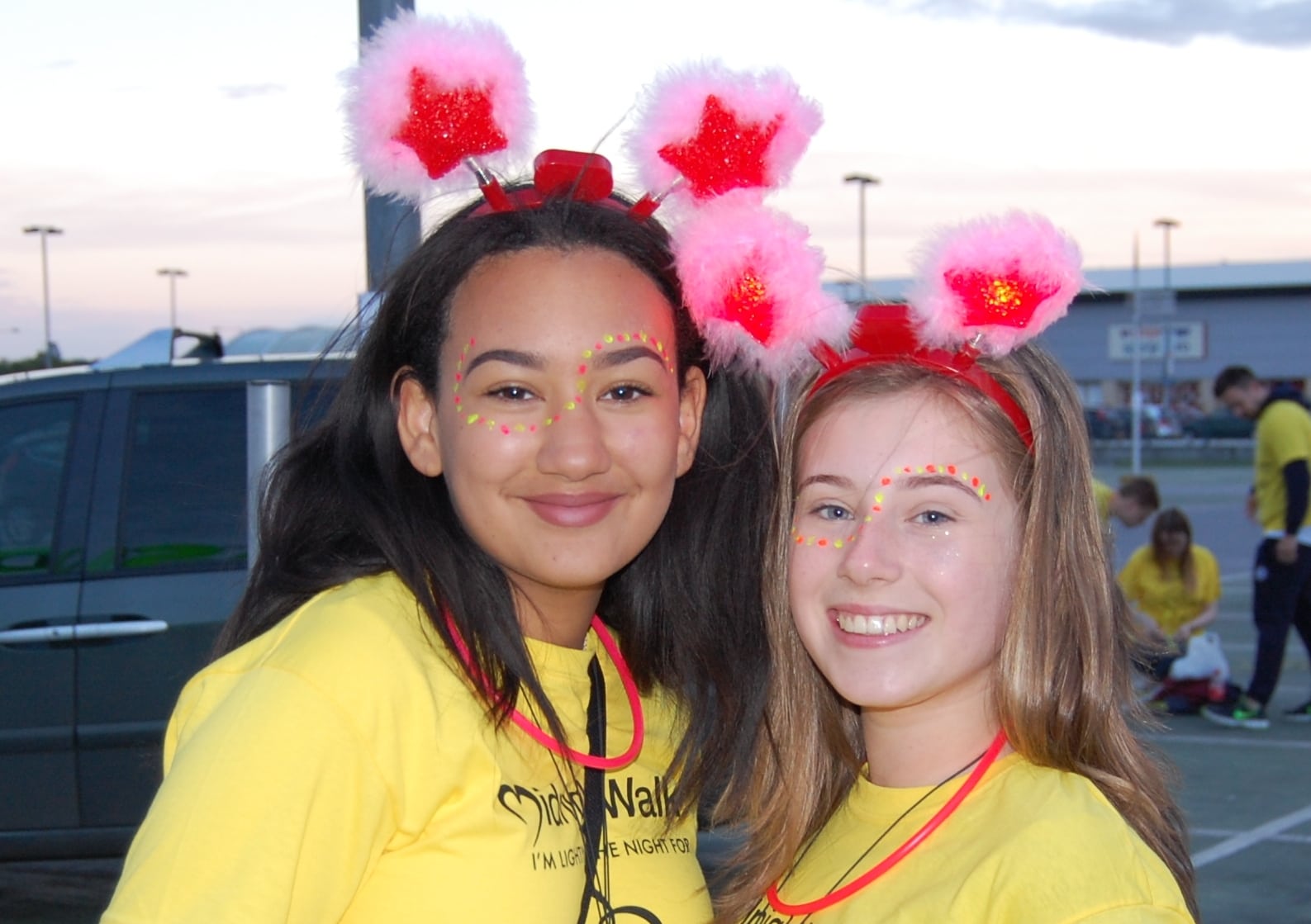 Over 600 walkers light up the streets of Harlow!

Flashes of fluorescent lit up the night as more than 600 neon walkers turned out for St Clare Hospice’s Midnight Walk on Saturday (2 July) at The Water Gardens.

Luminous pink, yellow and orange outfits set the streets of Harlow aglow at the neon-themed event as walkers of all ages came together to support the biggest fundraiser in the charity’s calendar. This year’s event was run in partnership with local law firm, Barnes and Partners, who entered a team of sixteen walkers – including the firm’s founding partner Nigel Barnes.

Following a DJ set from Su Harrison, breakfast presenter on Heart Radio, and lively warm-up dance routines from PureGym and Clubbercise; the procession of walkers set off at 11.00pm following either a 5k or 10k circuit through the streets of Harlow.

The event organiser, Jade Clarke, St Clare Challenge and Events Fundraiser said: “Once again our Midnight Walkers did the Hospice proud – turning up in droves to support our biggest event and helping to raise thousands of pounds of vital funding so we can continue providing our incredible care to local families.”

“We would like to say a huge thank you to each and every person who took part, as well as our army of volunteers and marshals who helped ensure the night was a success, and the many local businesses who supported us. It really was a fantastic night and one I will never forget. It was so moving to hold a minute’s silence in memory of those loved ones we have lost and then to watch the sea of yellow St Clare shirts winding its way up the main street.”

“I am so grateful to Sue Barclay, and her daughters Emma and Sophie, who came up on to the stage to talk about the care their husband and dad Steve Barclay received at St Clare. Our heartfelt thanks also goes to Michael Handley who started the race off for us. He was walking in memory of his dad, Mark, and has raised over £4,000 on his Just Giving page.”

Groups came from across West Essex and East Herts, the catchment area of the hospice, to take part in the Midnight Walk. Among the teams were a group from Elsenham Women’s Institute – better known as ‘The Gilbey Girls’ – which included Lindsey Peters, the poster girl for this year’s Midnight Walk.

The first people across the finish line were Sarah Swan and her family who walked the 5k route in just under an hour.

Sarah (50 from Harlow) was walking in memory of her best friend and colleague at Harlow Council, Andrea McGirr, who passed away at St Clare Hospice in March 2016 aged just 44 years.

Sarah said: “Andrea became ill quite suddenly and was diagnosed with bowel cancer. I was with Andrea all the way through her treatment and when she was referred to St Clare’s I went to visit her there. I had never been to a hospice before and so I had no idea what to expect – but it was just a fantastic place. I couldn’t fault the staff – they were amazing.”

As she finished the race Sarah said: “Tonight is my 50th birthday weekend but I just couldn’t imagine celebrating it without Andrea. So my family and I decided to take part in the Midnight Walk in Andrea’s memory. My sons, Joe and Zack, let me cross the finish line first so I could be the winner! I also walked with my partner Bruce, daughter Victoria and her boyfriend Connor. It has been a great event – we are so pleased to have been part of it.”

First back from the 10k route were Veronica Johansson, Kathy Forrest and Alan Hope who completed the longer route in 1 hour 21 minutes. The trio walked using Nordic walking poles as part of their training for the Three Peaks Challenge which they are undertaking in August. They will be part of a group of eight people climbing the UK’s three highest mountains in under 24 hours for charity.

Veronica was walking in memory of her friend Denise “Ginger” Salmon, who recently passed away, and her mother who was cared for by St Clare’s Hospice at Home service.

It is hoped that the event will have raised £60,000 once all sponsorship money has been collected – enough to fund the Inpatient Unit at St Clare for two weeks.

For the full photo gallery visit us on Facebook