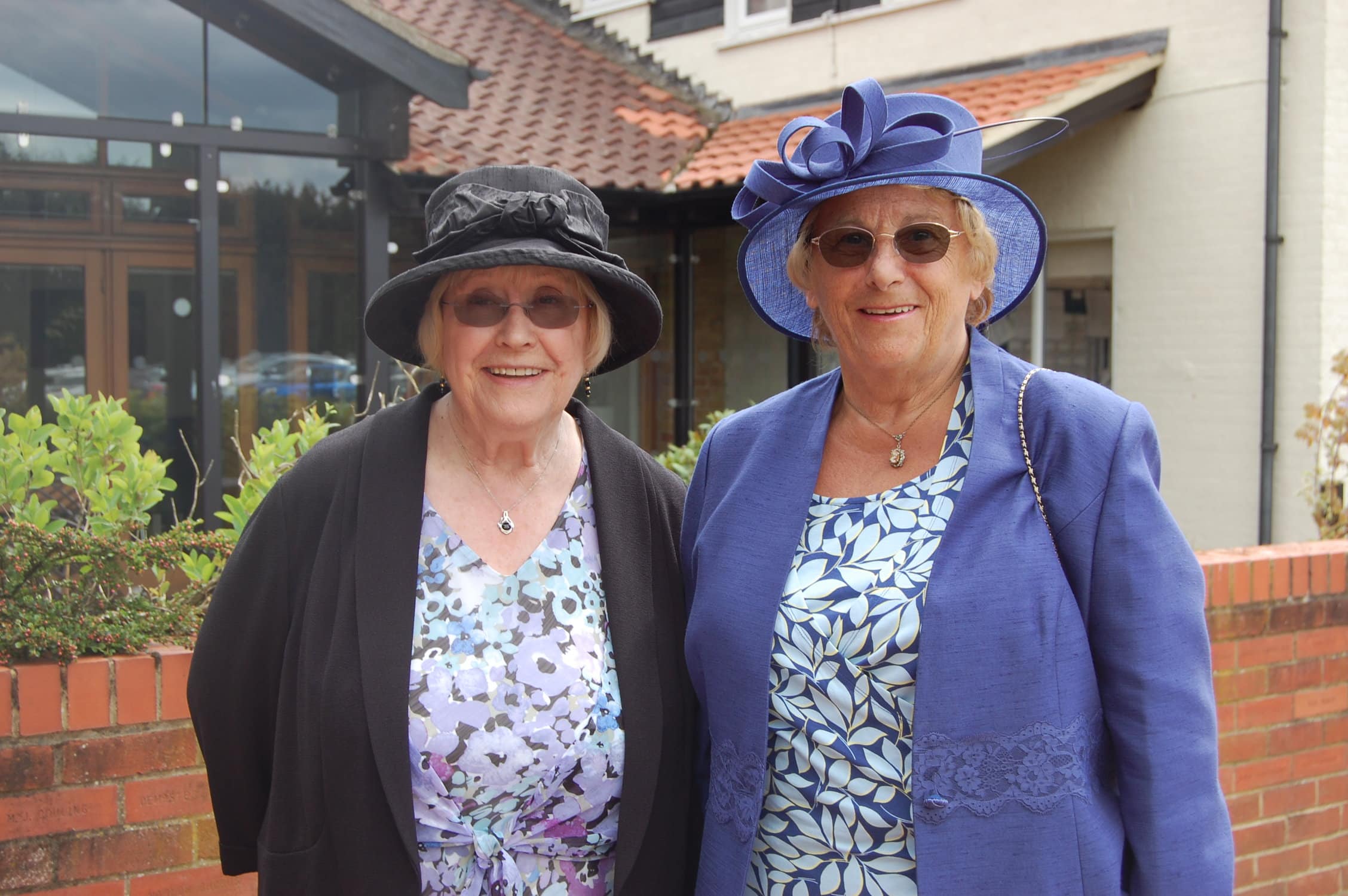 More than 550 dedicated volunteers support St Clare Hospice week in and week out – helping us to care for people with life-limiting illnesses and their loved ones. This week we are honouring our kind-hearted and committed supporters by celebrating national Volunteers Week (1-12 June). But for two of our volunteers the celebrations started a little earlier – and with a royal flourish!

Margaret Pomfrett and Gill Richardson, both residents of North Weald, were invited to attend the Queen’s Garden Party at Buckingham Palace on Tuesday 24 May in recognition of their service to St Clare Hospice. Margaret, who has volunteered for St Clare for more than 20 years, has held a number of volunteer roles at the charity and has seen the organisation grow considerably over the past two decades.

Margaret, who has lived in North Weald for more than 50 years, said: “I first became involved with St Clare in February 1995 when I joined up as a volunteer street collector. A few years later I started helping with the St Clare Lottery and used to go from door to door around my neighbourhood in North Weald, collecting the residents’ ticket money. I still regularly stand on Ongar high street or at the local supermarket, proudly holding my St Clare bucket.”

Commenting on the growth of the charity Margaret said: “It is amazing to have seen St Clare’s grow over the years. I remember when the hospice first started out in the old farmhouse building – and now they help more than 1,500 people every single year. Being a local resident I know firsthand of the fantastic care that St Clare provides to people in our community at one of life’s hardest moments. It is a privilege to be part of that care.”

“These days, my main role at St Clare is working as a volunteer receptionist – something which I started doing in 2006. I work every Wednesday morning on the front desk, welcoming visitors to the hospice, greeting the Day Therapy patients and answering the telephone. It is a lovely, happy place to work, in beautiful surroundings, and I feel honoured to be able to help the hospice in my own small way.”

On the morning of the Royal Garden Party, Margaret commented: “I was so delighted to be invited to the Queen’s Garden Party – and especially in 2016 as she celebrates her 90th birthday. I have been planning my outfit for weeks and just hope the rain stays away so that my silk hat doesn’t get wet! I am excited to see what the tea is like – I expect it will be the best afternoon tea I have ever had.”

Also attending the Royal Garden Party on the 24 May was St Clare volunteer Gill Richardson. Gill, a resident of North Weald for 17 years, is a retired nurse and has volunteered at the Hospice for more than a decade. Gill first became involved with St Clare when she was asked to join the Ongar Friends fundraising group and assisted as the treasurer for 2 years. In 2005 Gill became a volunteer driver for the Day Therapy service and has been a committed member of the team ever since – bringing patients to attend the various therapy groups.

Gill said: “My role as volunteer driver involves collecting patients and their family members and bringing them to attend the various therapy groups which take place at the Hospice. Often they may feel apprehensive before their visit but I can honestly say that once they have experienced St Clare, they always say it was fantastic. It is lovely to speak to the patients and to hear about how much they love coming to the Day Therapy sessions.”

Arriving at the Hospice on the day of the Royal Garden Party, Gill said: “It is very exciting to be going to the palace – but I am a little bit nervous. A little girl at my church has been making me practice my curtsey in case I meet the Queen. The invitation says the Queen and ‘members of the Royal Family’ will be in attendance – so we are intrigued to see who we will meet. I met Princess Margaret years ago when I was working on the wards in St Bart’s Hospital so I have a bit of practice of meeting royalty!”

Margaret and Gill’s royal trip to the palace was made even more special by another very kind-hearted St Clare supporter. Derek Oakley, who works for local family-run funeral directors, Daniel Robinson, has volunteered to drive the Garden Party guests in a limousine from the Hospice to London for more than 10 years.

Chris Crump, St Clare’s Voluntary Services Manager, praised Derek saying: “It is so kind and thoughtful of Derek to have volunteered his time to St Clare over so many years. Every spring, before the Garden Party invitations have even been delivered, I get a phone call from Derek asking if we would like him to drive our guests to the palace.”

“The limousine drive really is one of the highlights of the day for our volunteers. Derek collects them from St Clare and provides a bottle of champagne for them to enjoy on the drive in to London. He then chauffeurs them around all the famous sites and drops them right by the gate to the palace gardens. The volunteers say that tourists think it is the Queen herself arriving when they step out of the car! It is so lovely for them, and our volunteers really deserve to be spoilt on such a special day.”