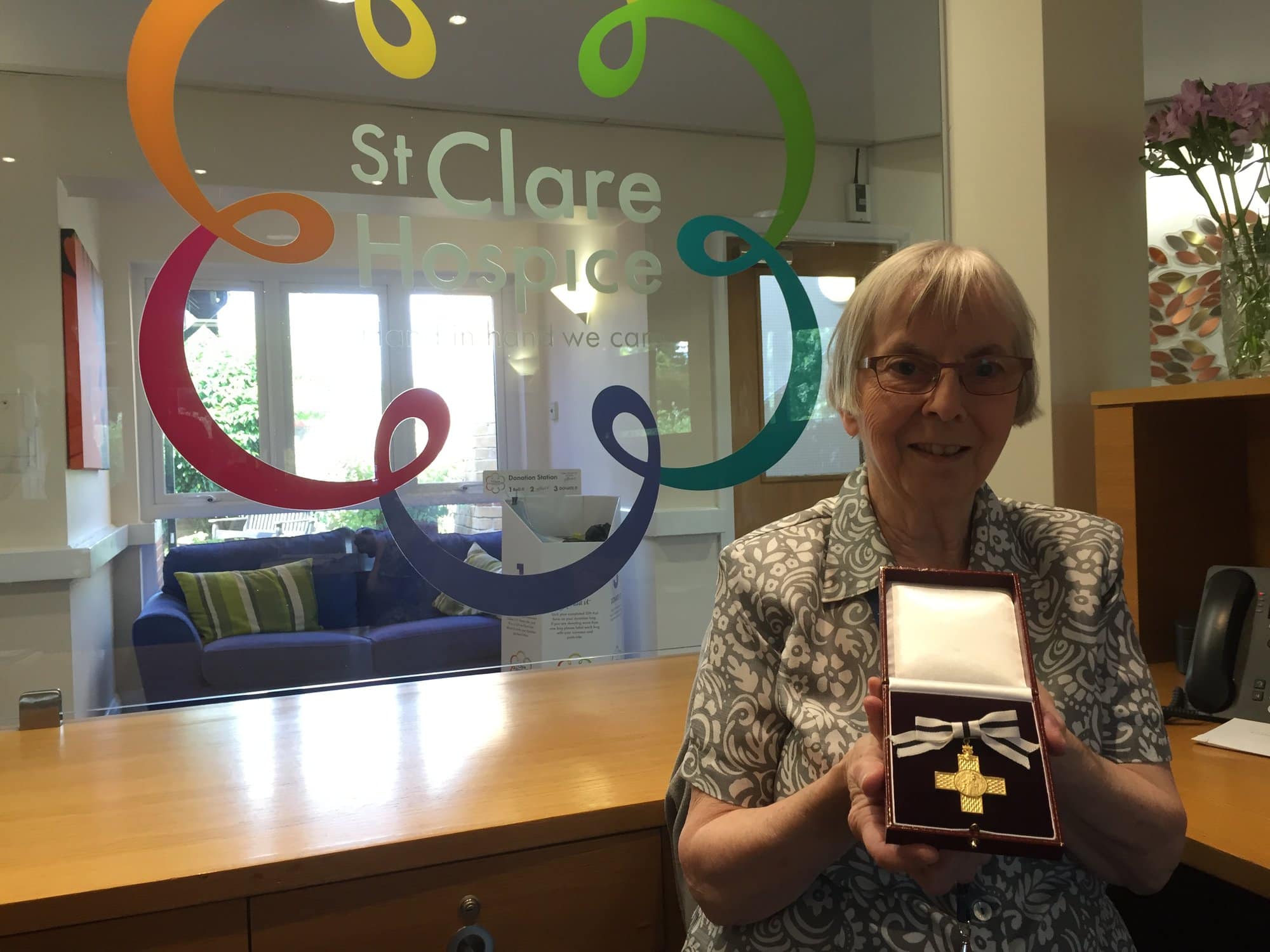 One of St Clare Hospice’s long-standing volunteers has been honoured with the presentation of a prestigious League of Mercy award.

Jill Talbot, who is part of the 550-strong Hospice volunteer team, was put forward for the award by the Hastingwood-based charity to honour her 13 years of service. Jill has held a number of volunteer roles during this time, including as a receptionist and an HR assistant.

Jill was presented with the award at a ceremony on Monday 4 July at The Mansion House in London by the President of the League of Mercy, Lord Lingfield.

On receiving the award Jill said: “When I received the letter about the award I had to read it twice because I couldn’t quite believe it! There are so many deserving volunteers at St Clare and I wondered why I had been singled out for such a prestigious award. I feel very humbled because all the volunteers work so hard and give up their time. I feel like it is an award for the whole of St Clare and all the staff and volunteers – not just for me. It is lovely for the hospice to gain this national recognition.”

The League of Mercy Foundation was founded in 1899 by Royal Charter of Queen Victoria and awards are made in recognition of volunteers who assist in the caring services. Twenty nine awards were presented this year a ceremony at The Mansion House.

Like many volunteers at St Clare, Jill began helping after a personal experience of the charity. The Hospice cared for Jill’s beloved husband, Ray, before he passed away in December 2002.

Jill said: “Ray and I met each other when we were both working at the Princess Alexandra Hospital in Harlow. I was a dietitian and Ray worked in the sterile services department and we were married in 1970.  Unfortunately, Ray was diagnosed with bowel cancer in 1998 and after several rounds of treatment we were told that there was nothing more the hospital could do for him. That was when we first came in contact with St Clare and it was such a support to us.”

Ray attended Day Therapy for several months which helped Jill as well as her husband: “Coming to St Clare really helped both of us to get through a very tough time. I think it’s good for the person who is going through the illness to have some space, as well the person who is looking after them. Ray used to really look forward to coming to Day Therapy every week – he enjoyed chatting to people and the activities that they did. I felt happy because I knew Ray was in a place of safety and was being well looked after.”

Speaking of the care on the Inpatient Unit Jill said: “Ray had several stays on the Inpatient Unit during 2002 to help with pain control. The nursing and medical care, and the support given to both of us by other members of staff, was excellent – you couldn’t fault it. Ray was more than happy to come in to St Clare – which speaks for itself really – he thought of it as a little holiday!”

Sadly Ray passed away in December 2002 aged 54 years. A year later Jill decided to start volunteering with St Clare as a way of giving back to the charity: “Like many of the volunteers at St Clare there are personal reasons why I have chosen to help the hospice. Not only this but volunteering is enjoyable for the volunteer themselves – otherwise they wouldn’t do it! I think it’s good to give your time to a local charity, and an organisation that helps so many people.”

Commenting on her role as a receptionist Jill said: “I think because I have always been used to working with people, it has been nice to continue that.  I think it makes a difference that I know how it feels to come here as the wife of a patient; and because of my NHS background I felt quite comfortable coming here.  Some people find their initial visit a little difficult and that is why an important and rewarding part of the receptionist role is helping to put visitors at ease and making them feel welcome at such a stressful time in their lives.”

For more information about how you can volunteer with St Clare Hospice, visit their website at www.stclarehospice.org.uk/get-involved/volunteer or contact their Voluntary Services Manager, Chris Crump, directly on [email protected] or call 01279 773722.